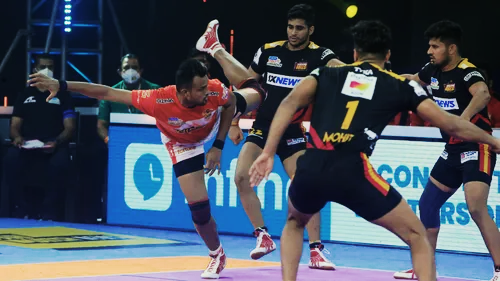 The hard work of coach Manpreet and his boys paid off as Gujarat Giants barges their way to the playoffs round and will be facing Bengaluru Bulls in the second eliminator of the Pro Kabaddi Season 8 caravan. Bengaluru’s Sheraton Grand Whitefield Hotel will be hosting this high-voltage panga between two red sides where Pawan Sehrawat will be summoned by the great wall of Gujarat.

These two sides faced each other in the final game of the sixth edition where the Bulls claimed their maiden PKL crown while Gujarat suffered from the consecutive final upset. Hence it is the only second when both of them are squaring off each other at the playoffs stage. Apart from Bengaluru, ‘The Powerstar Pawan’ has played for only one franchise at the PKL and that’s the giants from the land of Garvi Gujarat.

In their recent face-off, Gujarat avenged their previous defeat and registered a thumping victory over Bengaluru on a scoreline of 40-36. A marvelous Super 10 and a seven tackle points contribution from the cousin-covers Sunil and Parvesh played a pivotal role in the giant’s triumph. While Super 10 performances from Bengaluru’s raiding spearheads Pawan and Bharat weren’t enough to complete a double over Gujarat.

Gujarat gaffer Manpreet Singh’s rotation of raiders in this season has received wide praises from the PKL universe as the Giants have used every raiding option from their arsenal. It will be interesting to see if he promotes Pardeep Kumar to the Starting 7 or keeps him for the second half. The trio of GB More, Mohit Sehrawat, and Jaideep Sharma will strengthen the Bulls bench and will be given a chance if coach Sehrawat introduces Plan B.

The Karnataka-based franchise finished their league stage campaign after a convincing victory over Haryana on 17th February but waited till the last matchday to confirm their playoffs qualification. Then, the Pink Panthers’ loss against Puneri Paltan made it official that the Bulls will participate in the playoffs round for the third consecutive season.

After a defeat at the hands of Jaipur, Gujarat’s qualification scenario was to claim 21+ points from the remaining five fixtures. And the Ahmedabad-based franchise went on to play four wins and one tie to ensure their third playoffs qualification in history.

The previous win over the Bulls brought Gujarat in the leading position in this rivalry with the head-to-head count of four from eight encounters. While the sixth edition champions have three victories over the Giants and one clash remained resultless. 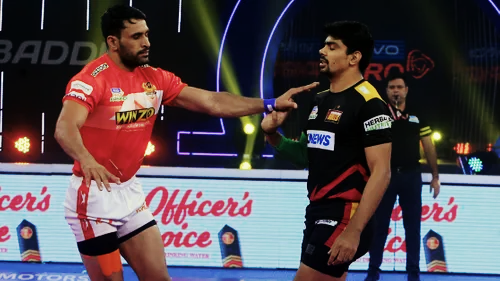 Pawan Kumar Sehrawat: Pawan has Super 10s from both encounters he had with Gujarat Giants but the Powerstar is twice more dangerous now after transforming himself as a pure all-rounder. A tally of 20 points against Haryana in his previous game is very usual from Pawan, but that individual outing also consisted of a whopping seven tackles which are incredible for a player who started the game as a raider.

Rakesh Sungroya: Rakesh has been the find of the season for Gujarat Giants as the youngster has showcased immense consistency with a top-notch skill set. The K7 product scored a marvelous Super 10 consisting of 14 raid points in the first face-off with the Bulls defense this season but missed the recent encounter due to unavailability.

Gujarat coach Manpreet will be coming up with special plans to stop his former scholar Pawan meanwhile the classic raiding trio of Bengaluru will be also prepared for the great defensive wall of Gujarat. Hence the prediction for this clash is quite a hard task as both teams are standing on equal winning chances but Bengaluru has a little advantage of having the services of Pawan who can turn the game in his way, be it any situation or any day.