Dabang Delhi vs U Mumba: Preview and Prediction  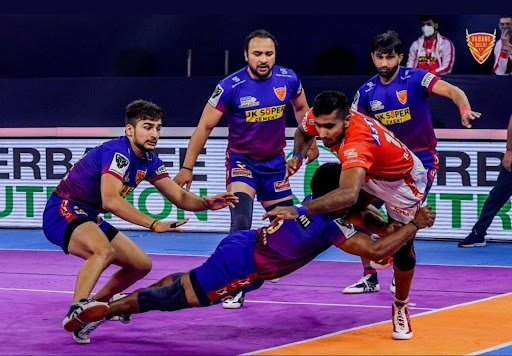 Image from the ongoing PKL season 8

Match number 85 of the Pro Kabaddi League Season 8 will see table toppers Dabang Delhi lock horns against fifth placed U Mumba in the at the Sheraton Grand Whitefield Hotel and Convention Centre in Bengaluru on Monday, January 31.

This game is going to be a crucial one especially for U Mumba as the tournament nears the business end. Dabang Delhi have eight wins from fourteen games and with 48 points comfortably sit atop of the table. They have managed to win  three out of their last five games and look to continue their good run.

Their opponents, U Mumba, on the other hand have won five from thirteen games and are currently placed fifth on the table. They have lost just one of their last five and will look to stick to their performances.

Dabang Delhi started the tournament with a draw against Gujarat Giants. Their first win came against Bengal Warriors where they registered a 52-35 win. Naveen Kumar and Vijay Malik were the top scorers for Delhi in the game.

Dabang Delhi are coming off a dominating 41-22 win over Gujarat Giants in their last game. In an all-round effort, Vijay Malik, Manjeet Chillar, Ashu Malik, Krishan and Sandeep Narwal were all amongst points.

U Mumba, on the other hand opened their campaign with a draw against Tamil Thalaivas. They beat Jaipur Pink Panthers in their very next game by a margin of 37-28 to claim their first win of the season. Abhishek Singh and V Ajith Kumar were the top performers for them in that particular clash. U Mumba are coming off a convincing 11-point win (45-34) over the Bengaluru Bulls in their most recent fixture. Once again it was Abhishek Singh who shone for them. V Ajith Kumar and Rahul Sethpal made key contributions as well.

Dabang Delhi and U Mumba have faced each other seventeen times in the history of the league. U Mumba have had the upper hand, having won twelve games in comparison to U Mumba’s four with one game ending in a tie.

It will be an interesting battle between the two sides. The main battle would be between U Mumba’s raiders Abhishek Kumar and V Ajith Kumar against Delhi’s defense. If Delhi are able to keep the duo calm  they can manage to win the game.