Tamil Thalaivas defeated Patna Pirates in the Battle of Survival to finally register their first victory of the Pro Kabaddi Season 9. Then the defending champions Dabang Delhi continued their winning streak after edging out Haryana Steelers by a one-point margin to stay on the top of the standings.

The ‘Parimatch News‘ brings you a detailed roundup review of two Match Day 10 fixtures of the PKL 9.

The Tamil gaffer J Udayakumara dropped a bomb before the kick-off by sidelining the retained raiding star Ajinkya Pawar from the Starting Seven. The Thalaivas instead preferred the local lad Visvanath and Himanshu Yadav for the supporting role to the strike raider

Narender Kandola. Meanwhile, the only change from the Patna Pirates camp was the experienced knight Monu Sandhu gracing the mat in place of the raiding all-rounder Abdul Insamam. The young unit of Tamil Thalaivas kick-started the game on an energetic note and brought the three-time champions down to three men inside the first five minutes of the first half.

However, the Pirates were able to recover from the initial crisis by slowing down the pace of the game and started playing on do-or-die raids. The last-man-standing Himanshu Singh’s Super Raid postponed their ‘Lona’ for a while but could not save themselves from getting bundled out in the 15th minute.

The first-half action ended with the Men in Green taking a tiny two-point lead on the scoreline of 17-15. The Super-sub Himanshu went on to replicate his feat of scoring Super Raid when there was no teammate left behind him in the Chennai court during his raid. The Bihar-based franchise then inflicted the second all-out of the game to enlarge their lead to five points right before the clock entered the final 10 minutes. 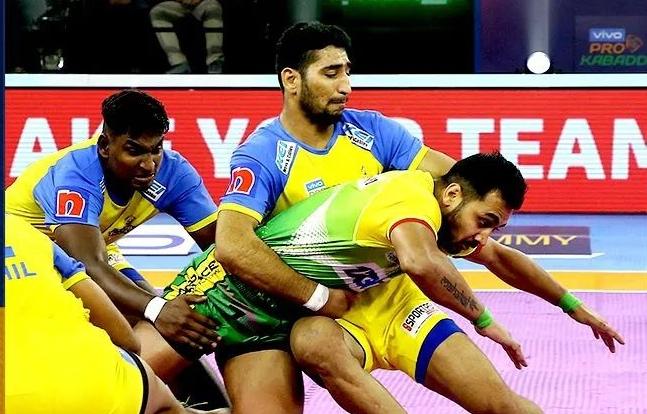 The Tamizhan raiding unit kept themselves alive throughout the trailing period and it finally paid off when they forced all-out in the decisive minutes of the game. An all-out in the 38th minute brought Thalaivas onto the driving seat with a tiny two-point lead to defend in the following two minutes. Skipper Sagar Rathee and the company kept their nerves under control to emerge victorious on the final scoreline of 33-32 on the full-time whistle.

Head Coach Ravi Shetty and the entire Patna camp seemed frustrated with the outcome as the bottle job in the final minutes nuked them from the first win of the season. The high-profile defensive line of Pirates which ruled Season 8 could manage to score only six tackle points from 22 attempts.

Following the footsteps of his uncle Manjeet Chhillar, the young raiding assassin Himanshu Singh emerged as the game-changer of the match. The Super-sub brought up his career’s maiden Super 10 collecting 11 raid points including four multi-point raids which played a pivotal role in the triumph.

The defending champions named the same Starting Seven which featured in their previous fixture avoiding any changes in the winning combination. On the other hand, Manpreet Singh made a single change replacing the Iranian starlet Amirhossein Bastami with Monu Hooda in the right-corner position. Haryana captain Joginder Narwal who was subbed off in the 3rd minute of the Jaipur clash also featured in the Steelers Starting Seven.

As expected, the encounter was kicked-off on a pacy note where the raiders from both sides started scoring quick raid points in the initial stages. The pace was slowed down eventually but the scarcity of the scoreline remained tight throughout the first-half action. Despite the initial flop show of the defensive department, the consistency of Delhi’s raiding Fauj kept them ahead of the neighbouring rivals.

The first-half episode finished with a the scoreline of 17-14 in the favour of the Capital-based franchise however, none of them managed to secure two all-out points throughout the 40 minutes. When the play resumed after the half-time halt, the Dhakkad Boys of Haryana captured the Naveen Express for a massive Super Tackle. The first Lona of the match was finally achieved by the Dabang Fauj in order to sustain their commanding position in the contest. 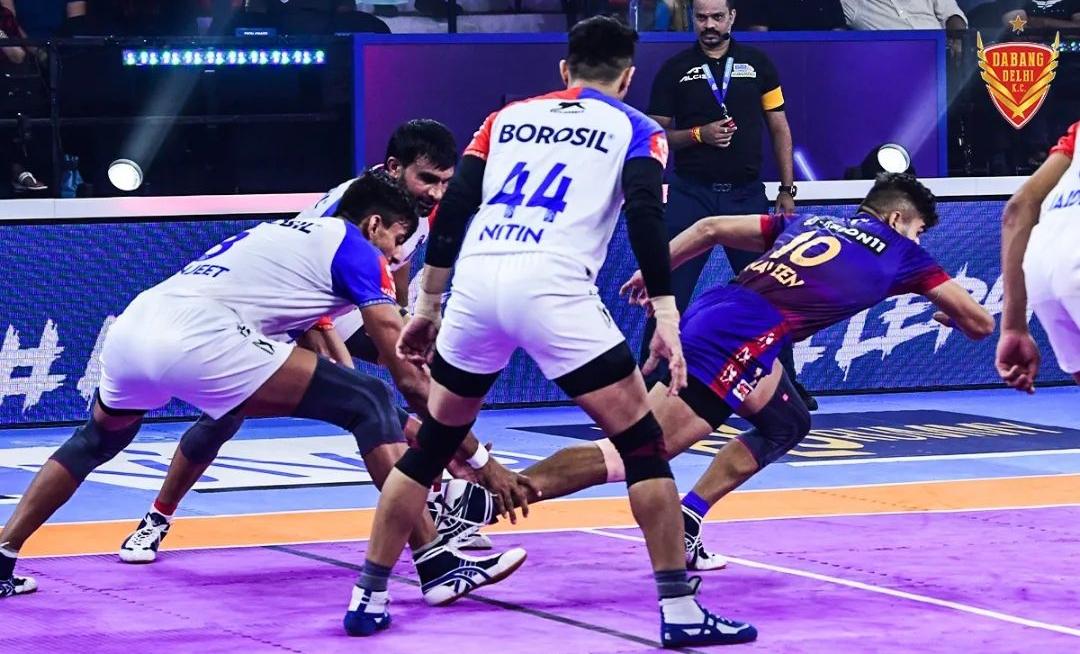 The moment when Naveen sealed it for the Dabangs!

The lead was lowered by the Steelers steadily through the excellence of their raiding unit. When Naveen Kumar proceeded to make the final raid of the game the scoreline was equal at 36-36 and then the raiding superstar went on to showcase his heroics. The Delhi captain first attempted a successful bonus attempt and also attracted the touch of left-in Manjeet Dahiya on his returning route.

The Naveen Express fetched 15 raid points from this fixture to achieve his fifth individual Super 10 in their fifth consecutive victory of the season. Vijay Kumar who donned the left-corner position emerged as the most successful defender of the match scalping four tackle points out of five attempts.

The defensive line of the Steelers relatively excelled in the second half bagging seven tackle points but still remained the major reason behind the setback. Manjeet achieved his second Super 10 of the season but could not hold himself back in the decisive moment and made a blunder which directly cost them four match points.