Bengaluru Bulls vs UP Yoddha: Preview and Prediction  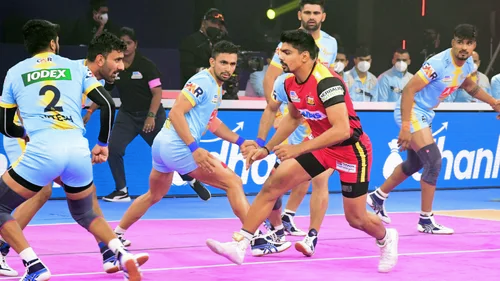 Will UP Yoddha once again succeed to sway the storm of Pawan Sehrawat?

Pawan Sehrawat’s storm will be summoned by the record-breaker Pardeep Narwal in Match 87 of Pro Kabaddi League which is part of anticipating rivalry week of season eight. UP Yoddha led by Nitesh Kumar will be up against the sixth edition champions Bengaluru Bulls at Sheraton Grand Whitefield Hotel in Bengaluru.

Pawan and Pardeep, both destructive raiders debuted in PKL under coach Randhir Singh Sehrawatare and are now known as nightmares for the defenders. Pardeep switched his destinations to follow a different career path while Pawan continued to represent the Bulls under the watch of Randhir. This rivalry week game will turn into Superhit Panga when these two combatants take the counterpart courts for this battle of supremacy.

Earlier this season, the defensive unit of Yoddhas faced Bengaluru Bulls and showcased the best defensive performance in the history of the Pro Kabaddi League. The referee blew the full-time whistle on a scoreline of 42-27 in favor of UP and concluded the game where Yoddha’s defense earned more points than the raiding departments of both sides. The blue side had eight contributors in the tally of 22 tackle points and inflicted only one all-out in a humongous fifteen-point victory.

UP coach Jasveer Singh is likely to avoid any changes in the Starting 7 but we may see many changes in the Bulls lineup from their previous fixture. In their previous game, three defensive starters of Bengaluru Bulls (Saurabh Nandal, Aman Antil, and Mahender Singh) found themselves on the bench as part of coach Sehrawat’s rotation policy. But the plan backfired big time and we will see all of them back in the Starting 7 for this clash meanwhile, Mayur Kadam’s future as first-choice right cover is also uncertain.

In a recent turn of events, Bengaluru Bulls were dethroned from the table-toppers position by the capital-based Dabang Delhi franchise. The red army held the crown for a long time but arousing threats from Patna Pirates and Dabang Delhi finally struck down the Karnataka-based franchise. On the other hand, Yoddhas performed collectively in patches and went through a lot of ups and downs in the season eight campaign hence roaming around the mid-table.

Coincidentally, both franchises are coming back to the battlefield after getting bashed by the lower-ranked side from the points table in their previous fixture. UP lost the high-scoring raid fest against Puneri Paltan meanwhile the Bulls were handed over an eighteen-point defeat by the Tamil Thalaivas side in ‘The Kaveri Derby’. The Uttar Pradesh-based franchise will be returning to action after a relaxation period of five days and it will help the roster to reboot themselves from the last two consecutive defeats.

A convincing win earlier this season brought UP Yoddha on three in the head-to-head record while the Bulls are already cruising with seven victories from ten encounters between these two counterparts. The destruction from the Uttar Pradesh-based franchise was a vengeful answer to the Bulls who eliminated them from the seventh edition of PKL.

Pawan Sehrawat: Pawan’s rise has been one of the main reasons behind the shift of heavy hype from Pardeep Narwal since the last few seasons. Since his resurgence in season six, Pawan is the most successful raider with most raid points and Super 10s in the Pro Kabaddi. Unlike other superstar raiders, he also does defensive contributions with utmost responsibility as Bengaluru’s defense was struggling in their previous fixture, it was Pawan who scored two tackle points by attempting a successful Super Tackle. 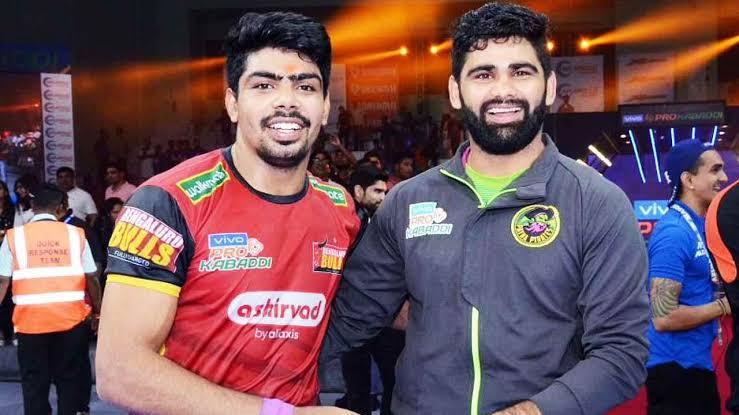 Daydream of franchise owners, the nightmare of defenders!

Pardeep Narwal: The PKL universe is witnessing a unique version of Pardeep this season where his role in the team is beyond certainty. Since his prominence, we have never seen Pardeep playing any other role than the main raider but the ‘Dubki-King’ is also seen acting as support raider or even attempting continuous ankle-hold attempts on opponent raiders. The record-breaker could not contribute a single point in their historic win over Bengaluru earlier this season and left the mat as an early substitute. And he will be out again to hunt first points against Bengaluru Bulls in the season eight caravan.

UP Yoddha will be carrying a psychological edge over the Karnataka-based franchise owing to the incredible outcome from the previous face-off.  They have a golden chance to complete a double over the Bulls are having a disastrous run from their recent few fixtures.