The defending champions Bengal Warriors will resume their Pro Kabaddi League Season 8 campaign when they take on U.P. Yoddha in Match No. 69 at the Sheraton Grand and Convention Centre in Whitefield in Bengaluru on Friday.

This promises to be an exciting mid-table clash as both teams are eyeing a spot in the top half of the table. While the Yoddhas occupies the fourth position with 33 points from 11 matches, the Warriors are four spots below them with 30 points in their bag from 10 games as of this writing.

The two teams are neck-to-neck in the raiding department with the Yoddhas having made 186 successful raids against the Warriors’ 174 raids. While the side from Uttar Pradesh has a 40% success rate in raids, their opponents have a 39.73% raid success rate. Both the sides have also made 8 Super Raids in the competition and inflicted 13 All-Outs each on the opposition so far.

Defensively speaking, UP Yoddha holds the upper hand as they have made 16 Super Tackles in the competition, the most by any side while Bengal has just done it 7 times. While the Yoddhas have 117 team tackle points, the fourth highest in the tournament, the Warriors have 93 points from that avenue – the third-lowest among all the teams.

Bengal Warriors began the season right from where they left as they won their first two encounters with ease. However, three back-to-back defeats derailed their campaign and they soon found themselves on the bottom half of the table.

Since then, the Warriors have been topsy-turvy picking up two wins and losing two matches in their next four contests. A 32-32 tie against U Mumba brought some stability to the side before eking Telugu Titans by a one-point margin in their previous encounter.

UP Yoddha raised the curtains to their campaign on a disappointing note losing two out of their first three matches. They suffered two ties on the trot before succumbing to two successive losses.

Since then, the Yoddhas have found momentum on their side, staying unbeaten in their last four encounters and picking up three victories in the process. In their previous game, they beat Puneri Paltan by a 10-point margin in a high-scoring affair.

The Bengal Warriors hold the upper hand over UP Yoddha in the head-to-head count winning three of their eight encounters. The teams were forced to share the spoils in three games while two matches ended in the favor of Yoddhas.

In the previous game between the two sides this season, Bengal came out on top beating their opponent 38-33. Esmaeil Nabibakhsh used his all-around abilities to full force picking up 11 points from attack and defense.

Esmaeil Nabibakhsh: Although Maninder has been prolific this season, the Yoddhas have figured out a plan to stop the Bengal Warriors raiding machine. In that case, Nabiabakhsh has to step up and pick up points for his side as he did in their previous encounter.

Surender Gill: Stepping out of the record-breaker Pardeep Narwal’s shadows, Gill picked up 21 raid points against Puneri Paltan. He will need to bring that form against the Warriors for UP Yoddhas as well. 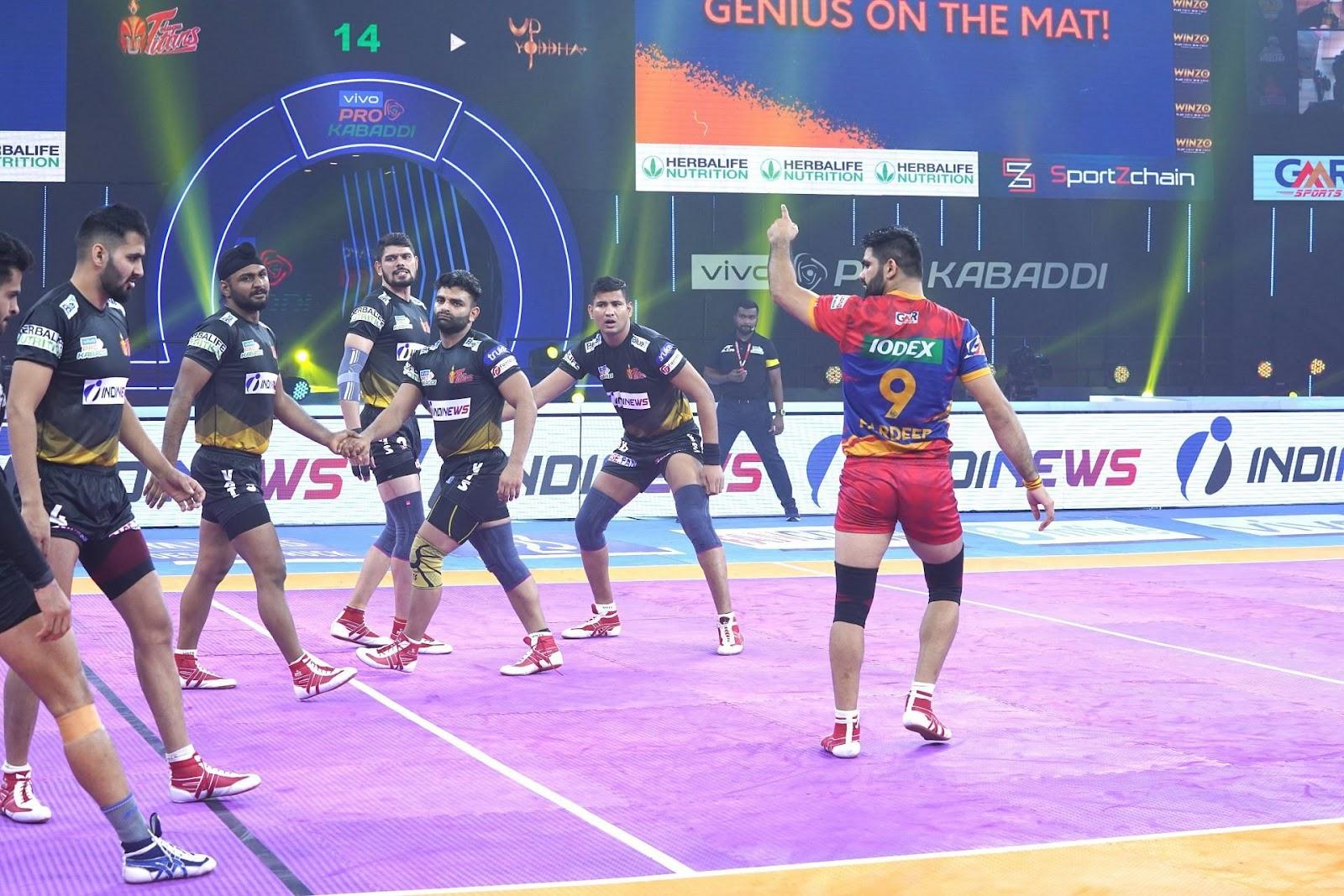 UP Yoddha will be banking on Pardeep Narwal

Both sides are entering this game with momentum on their side but Bengal Warriors have beaten the Yoddhas previously and have grown only strength-to-strength. Hence, we predict a tight victory for the Warriors.