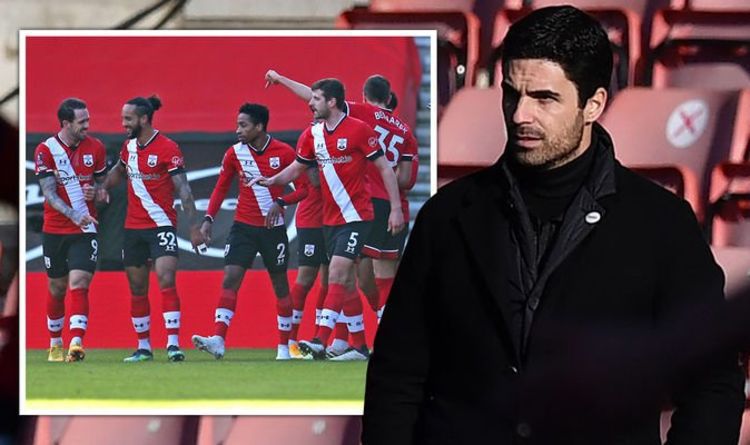 This season the FA Cup will have a new owner –  Arsenal, the current holder of the cup, was eliminated in 1/16, losing away to Southampton.

Arsenal had almost no dangerous chances to score, while Southampton could have converted even earlier in the game – James Ward-Prowse almost executed a ‘dry leaf’ (hit the crossbar).

In the 24th minute, Soton created a beautiful attack, delivering the ball right to the right-back Kyle Walker-Peters, who in his turn decided to shoot into the penalty box to center forward Che Adams. But here comes Gabriel, an Arsenal newcomer who joined the club this summer, who decided to “help”: he interrupted the pass and hit it perfectly in the armpit of the pounced Bernd Leno. That was a single goal of this match which secured the next round for Southampton (1-0).

The own goal moment:

Southampton in 2021 has already beaten the Premier League champion (1-0 against Liverpool) and the Cup winner (also 1-0). By the way, the victory over the current holder of the FA Cup happened to Southampton for the first time in 119 years – and at that time the club reached the final, where they lost to Sheffield United. This season they can surpass that achievement – Ralph Hasenshüttl’s team is very good.

Mikel Arteta still feels that his team does not deserve to be knocked out of the cup – he says that in the first half they made mistakes because of the “firm Southampton`s pressure“, but then they played better:

“I’m very disappointed because we wanted to continue the competition. We had a dream to again like we did it last year step by step and that dream today, it suffered. And as well disappointed with the way we conceded the goal in an area we know we shouldn’t do that and give the lead to the opponent. At the same time I cannot fault the effort of the players how they tried throughout the game and tried to go for the goal in the second half the way we did it. But it wasn’t enough because we conceded a goal that we shouldn’t, and when we created the chances we didn’t hit the target.”

Also, the team captain was absent for the match, lads from Arsenal definitely missed the main attacking force (he scored two goals last match). Mikel Arteta answered the question on the reasons for not being included in the starting XI:

“I don’t know he needs to address that issue see how it evolves. We’re here, we will have to support him. He needs to take the time that is needed because that’s a priority at the moment.”

There are some rumors that Pierre missed the match because of his divorce with his wife. They have two children, and he met her as a child.

Hasenhüttl reflected on a battling performance:

“We took it very seriously today and tried to win against the cup holders,” he said.

“It was a big home game and a pity that the fans weren’t here to watch us fight against them. I think we showed them some good actions and the first half was definitely a very good one for us, and the second half was a little bit more under pressure but this is normal. The first half was very good and organised, calm on the ball and we had some good early ball wins. It was a very committed performance but tough against a strong side.”

Saints will now face Wolves in the fifth round of the competition.

“There’s still a way to go and we first have some Premier League games that we must try to win and then we can focus on the cup again.”