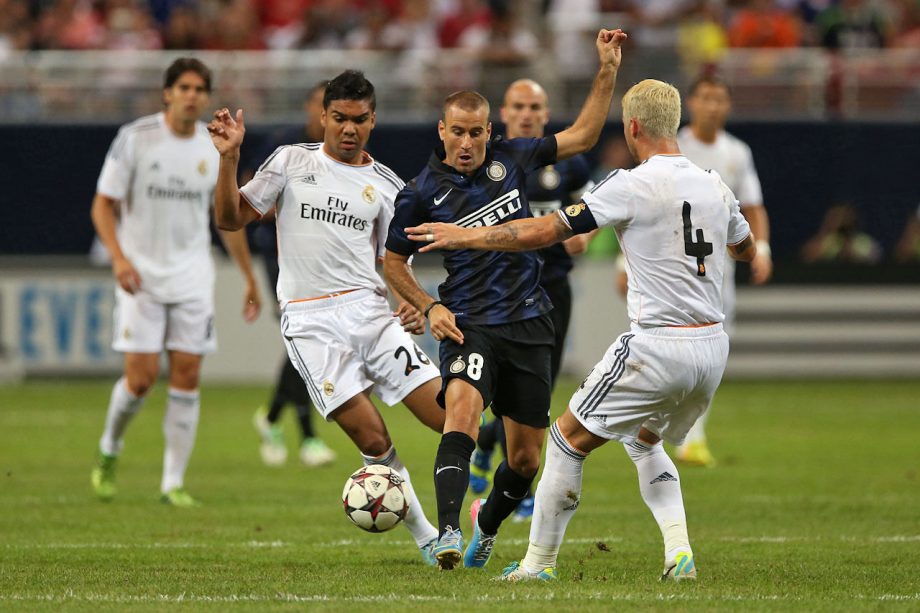 Real Madrid will play hosts to Inter Milan at the Alfredo di Stefano Stadium on Tuesday as they are still looking for their first win of the ongoing Champions League campaign. And here is our tips regarding this event.

Los Blancos started their UCL group stage with a 3-2 loss to Shakhtar Donetsk and followed it up with a 2-2 draw against Borussia Monchengladbach. Zinedine Zidane’s men now face an uphill task as their next opponents are 2019-20 UEFA Europa League runners-up Inter Milan and the Madrid-based team are desperate for the points as they sit bottom of the Group ‘B’ table.

On the other hand, Inter Milan are unbeaten in this year’s Champions League as they drew 2-2 in their opening match against Borussia Monchengladbach and then drew a blank in the next game as it ended 0-0 against Shakhtar Donetsk.

Real: Currently, Real Madrid placrs second in the La Liga table with 16 points from 7 matches as the 1-0 loss against the newly promoted Cadiz CF is hurting the defending champions. But a 3-1 win against FC Barcelona last week and a 4-1 win against Huesca on Saturday should keep the side in high spirits for the match against Inter.

Inter: Inter Milan are 6th in the Serie A table with 11 points from 6 matches as they lost 2-1 in the Milan Derby and the recent 2-2 draw with Parma affecting the Nerazzurri’s points tally in Italy’s top flight.

In a total of nine UCL matches, the Milan giants have won 5 matches, Real Madrid came out on top thrice, and one match was drawn between the two teams. These two teams squared up against each other in the Champions League group stage last time in 1998 and the Nerazzurri came out on top as they bagged the match 3-1 courtesy of a brace from Roberto Baggio.

Real: Zinedine Zidane will not be able to call upon the services of defenders Dani Carvajal and Nacho Fernandes creating a void on the right side of the defense. Norwegian starlet Martin Odegaard is also unavailable while Spanish right-back Alvaro Odriozola is also doubtful for Tuesday’s match.

Inter: Antonio Conte will be missing key Uruguayan midfielder Matias Vecino through injury while it is unlikely that star striker Romelu Lukaku will enter the pitch, along with slovakian centre-back Milan Skrinikar, Chilean forward Alexis Sanchez, and Italian midfield Stefano Sensi will be also risked due to minor knocks or being partially fit.

Real Madrid is certainly in better domestic form but needs to turn around their Champions League season before it’s too late and the bookmakers are certainly favoring them for the upcoming match.

The home match implies that Real is able to resist the Inter, but no one knows what to expect from the Milan Grand. Bookmaker Parimatch gives a 1.84 to Real and 4.10 to Inter victory.

In turn, our editorial team believes that the match will be full of goals and assume that it will end with a total of over 2.5.