Parimatch News Exclusive- Carles Cuadrat: It is a magnificent opportunity for Khalid Jamil 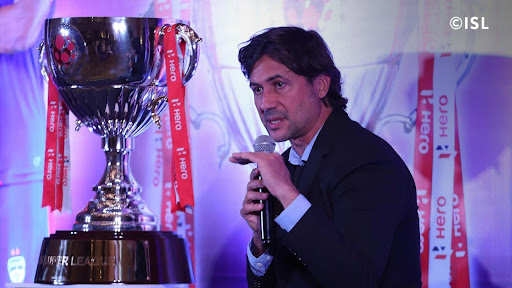 Less than 48 hours to go for the kickoff of the 2021-22 season of the Indian Super League and the atmosphere is fervent with the vibes of the new season around the corner.

The eighth season of the ISL, much like the seventh ISL season will be played entirely in Goa as the 11 clubs have improved on their squads from the last season with new incomings. The rules have also changed a bit with the limit on the overseas players reduced to 4 in the starting XI and 6 in the squad.

The season will start with the big clash between favorites ATK Mohun Bagan and the renewed Kerala Blasters followed by the match between former champions Bengaluru and NorthEast United.

The exciting schedule of the ISL is upon us and to get a more in-depth analysis for the upcoming season, the Indian Super League winning manager Carles Cuadrat spoke with Mohak Arora of Parimatch News. The former Bengaluru head coach talked about the new head coaches of different clubs, Gurpreet Singh Sandhu, and the glorious striker combinations in ISL history.

You can also read Part 1 of the interview by clicking on this.

The former Bengaluru head coach pointed out that the new season will see a lot of new managers as a lot of legacies came to end last season. He said,

“For the first time since 2017, neither Sergio Lobera nor I will start an ISL season. It will be an unusual situation, after 3-4 years leading important projects. We both become an inherent part of the ISL and add value to the competition. Together with Antonio Habas, we are the coaches with the most matches managed and won in the history of the ISL. Over time the three of us have come a long way in Indian football, being good connoisseurs of local footballers and the characteristics of this competition.”

Cuadrat also explained that he is looking forward to someone breaking Sergio Lobera’s point per game record in the ISL history. He said,

“The three of us also managed to be Champions and, interestingly, although Antonio Habas (1.69 points per game) has managed to win 2 championship titles, both Lobera (1.84 ppg) and I (1.70 ppg) have a better average of points won per game. So it will be strange to have an edition without 2 of the 3 coaches who have won the last 3 editions of ISL.”

“In that sense, other coaches with good numbers, such as Owen Coyle (1.54 ppg), Juan Ferrando (1.45 ppg) or Manolo Márquez (1.45 ppg) will have the opportunity to show what they know about this competition and thus improve the statistics that Lobera, Habas and me have with more than 50 matches directed in ISL.”

Carles is especially looking forward to witnessing an Indian head coach in charge of an ISL club before the start of the season. He said,

“After 8 editions, we will have the opportunity to have for the first time an Indian Head Coach directing a project since the beginning of the season. It is a magnificent opportunity for Khalid Jamil (with 1.69 points won per game, although only 13 games managed so far) to show that his success has not been a temporary streak but maybe enough to bring his team back to the playoffs as it happened last season.”

The Spanish manager also discussed how someone as talented as Aridane has failed to make an ISL playoff appearance to date. Carles said,

“Historic ISL teams always have a pair of outstanding forwards. Champion teams have the ability to combine offensive pairs that make a difference. A clear example is Aridane (Hyderabad, Odisha) in recent years, who always has good numbers as a scorer, has never reached a playoff for the title because he was not well enough accompanied at the top.”

He also talked about teams like, Bengaluru, ATK Mohun Bagan, Goa, and Mumbai City using a strike-partnership up top which is the more successful system in the ISL rather than a solitary No.9 upfront. Cuadrat quipped,

“The couple that formed Miku and Sunil in our best Bengaluru FC, got us a joint number of goals and assists that allowed us to win 3 titles (Federation Cup, Super Cup, and ISL), and be regular league champions in the 4th edition (29 goals for both players).” 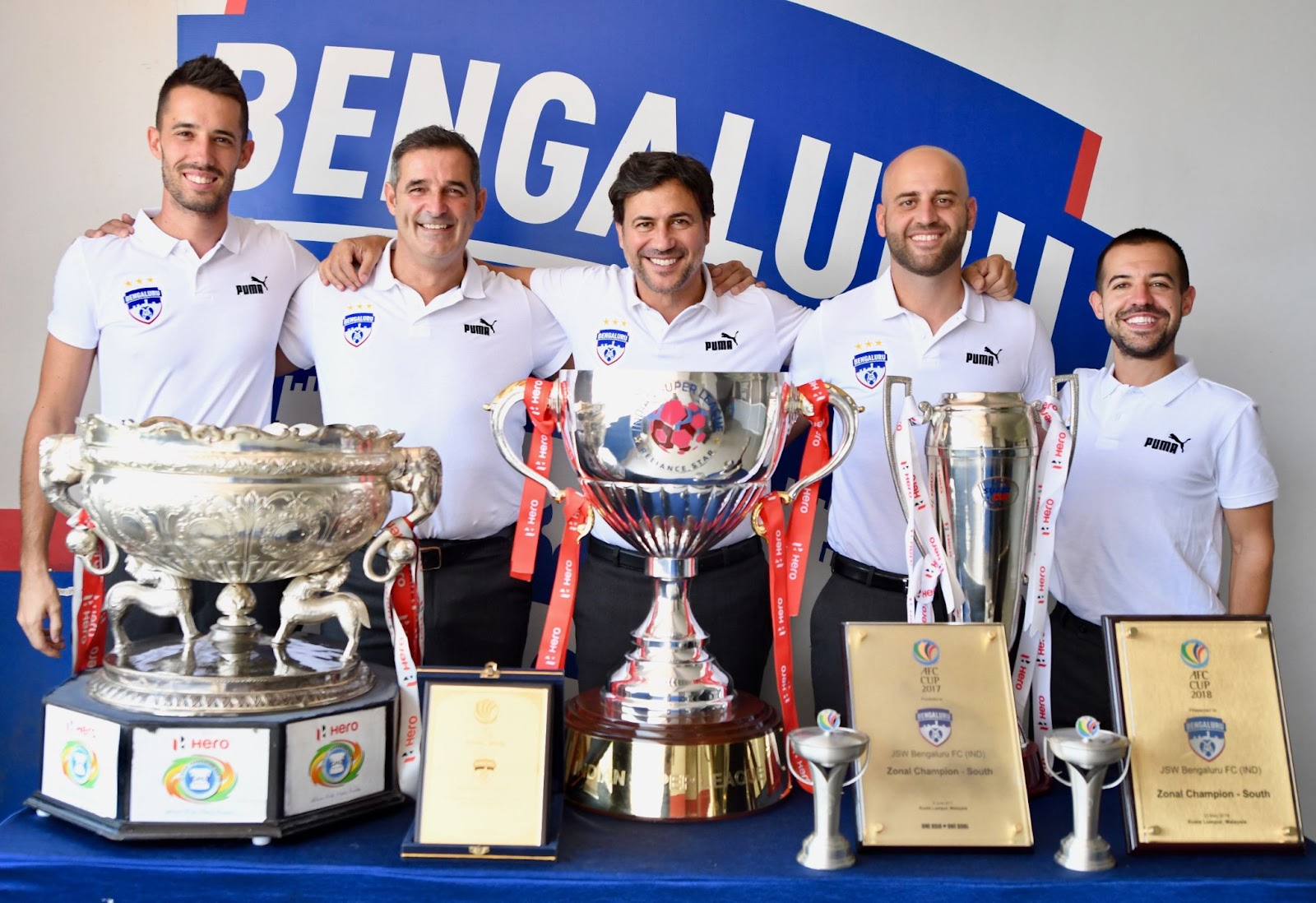 Carles Cuadrat and his coaching staff with their titles at Bengaluru

“The best Goa in Lobera got that good combination with Coro and Hugo Boumous (25 goals together in the 2018/2019 season). The 2020 ATK champion hit the key by bringing David Williams and Roy Khrisna (22 goals together) to the country. The last champion, Mumbai City, was nourished by goals from Adam Le Fondre and Ogbeche (19 goals). We will see in this 8th edition of ISL which team achieves the best attack combination to achieve these championship numbers.

When asked about the top names for the Golden Glove award ahead of the new season, Cuadrat heaped praise on his former charge and India and Bengaluru No.1 Gurpreet Singh Sandhu. He said,

“I have no doubt who the best goalkeepers in the country are. Amrinder and Gurpreet. In addition, with Gurpreet, we achieved in the 2019/20 season the ISL clean sheet record (11 CS), which has not yet been exceeded. He is the goalkeeper so far also with the most ‘clean sheets’ in the history of the ISL, even though he did not arrive in the country until the 4th edition. But only in these 3 years in the competition, he has already surpassed other great goalkeepers such as Amrinder himself or the last Golden Glove Award, Arindam (Bhattacharja).”

Putting a spin on the clock, the former Bengaluru head coach took us to times when Gurpreet Singh Sandhu was impenetrable and no striker in the league could get the ball past him. Cuadrat concluded,

“During my time at Bengaluru FC, we had a very well worked defensive structure that allowed us to control the games and barely allow goals. That made possible so many records that we achieved, such as 2 years without losing in Kanteereva, the longest number of consecutive minutes without conceding a goal. I hope that by next season, we will again enjoy Gurpreet’s brilliant numbers.”