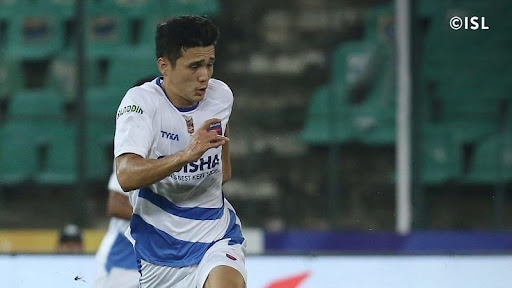 Reigning Indian Super League champions Mumbai City have acquired the services of Odisha skipper Vinit Rai on loan for the remainder of the ongoing ISL season.

Central midfielder Vinit Rai is pleased with the interest shown in him by the reigning champions and vowed to fight for a place in the team ahead of his move to the Mumbai-based club.

“I’m delighted to join a club that is not just the reigning champions but have ambitions of achieving, even more, this season. We have a squad full of talented players here at Mumbai City and I am determined to fight for my place and do my best to help the club achieve our collective goals this season.”

The 24-year old midfielder further thanked his former club Odisha for showing the trust in him at such a young age and crowning him as the captain of a renewed side ahead of a crucial season.

“I also want to extend my gratitude to everyone at Odisha FC for the support they’ve given me. Having said that, I am ready and I cannot wait to get started with my new teammates.”

Rai started the ongoing ISL season on a good note as he captained the Juggernauts to a 3-1 victory against 2018-19 ISL champions Bengaluru and made five consecutive starts for the team before falling out of favor due to the speculation around his future.

After featuring for Kerala Blasters on a couple of occasions in ISL 2016, Rai was snapped up by Delhi Dynamos ahead of the ISL 2017-18 season. Since then, the central midfielder has been a core part of the club for five years that also saw the club move its base to Bhubaneshwar and rechristen itself as Odisha.

Apart from making 68 ISL appearances for Odisha, the midfielder made his India debut in 2018 against Bhutan and has featured for the Blue Tigers on 10 more occasions.

Mumbai City head coach Des Buckingham welcomed the club’s latest recruit and is glad about having more options to choose from in the central midfield area as the Englishman has denied putting his trust in experienced holding midfielder Rowlin Borges.

“Vinit is an experienced footballer. He is one of the top players in his position and knows exactly what it takes to be successful in the ISL. Vinit’s arrival gives us more options in the middle of the park and we’re confident he can and add value to what we’re trying to do here at Mumbai City.”

The former Wellington Pheonix manager has already spoken to Rai ahead of his move and feels that the central midfielder is on a good wavelength to contribute to the growing project at Mumbai City.

“Having spoken to him, I know that he is a thorough professional. Vinit knows what we expect from him and I am sure he will make a mark in his time with us.”

Rai knows the league well, is already present in Goa, and would be a bubble-to-bubble transfer leading to his availability for the islanders’ clash against Kolkata giants East Bengal on Friday.