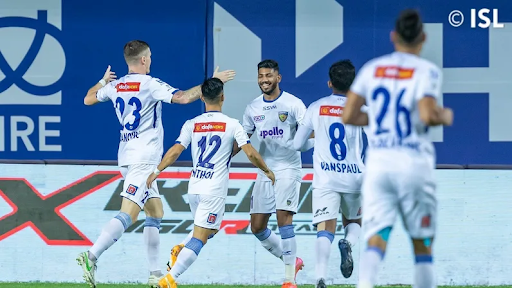 Chennaiyin shared spoils with Odisha in an entertaining 2-2 draw in ‘Match 93’ of the 2021-22 Indian Super League season. Javi Hernandez and Jonathas were on target for the Kalinga Warriors while Rahim Ali and Nerijus Valskis scored for the Marina Machans.

On the other hand, Chennaiyin’s interim coach Syed Sabir Pasha played a system that is very different from that of former head coach Bozidar Bandovic’s style. He shifted to a four-man backline and brought in Edwin Vanspaul to fill up the right-back position. In midfield, Ariel Borysiuk partnered with Vladimir Koman and Anirudh Thapa while Ali slotted in as a forward alongside Valskis who led the lines for the Marina Machans.

Chennaiyin wasted no time in getting off the blocks as Thoiba Singh’s early foul allowed them to take a freekick in a dangerous area. Valskis stepped up and despite his first attempt getting blocked, he managed to lay off the rebound towards Ali, who was lurking at the far post. The young Indian forward showed good composure to calmly slot it past Arshdeep Singh in the Odisha goal to hand Chennaiyin the lead in only the second minute of the game.

However, the Kalinga Warriors bounced back in fashion and restored parity in the 18th minute, courtesy of a goal from Hernandez. The Spanish midfielder sneaked past a couple of players before playing a one-two with Jonathas. He then chipped the ball over Chennaiyin custodian Debjit Majumder, finding the back of the net exquisitely.

Just before halftime, Hernandez’s long-range shot was blocked for a corner as Chennaiyin maintained their shape well. Minutes later, Jonathas came close to getting his name on the scoresheet as his header was on target, but Debjit averted the danger.

The second half started exactly how the first half did as Chennaiyin was once again quick to get off the blocks. Narayan Das had a good chance only four minutes after the resumption but he blazed his shot over the crossbar.

A minute later, Garcia’s men had the easiest of chances as Jonathas got the ball in the penalty area and had only Debjit to beat, with Javi lurking in the vicinity to provide him with an alternate option. However, the Brazilian went for glory himself, only to be denied by Debjit’s left leg. 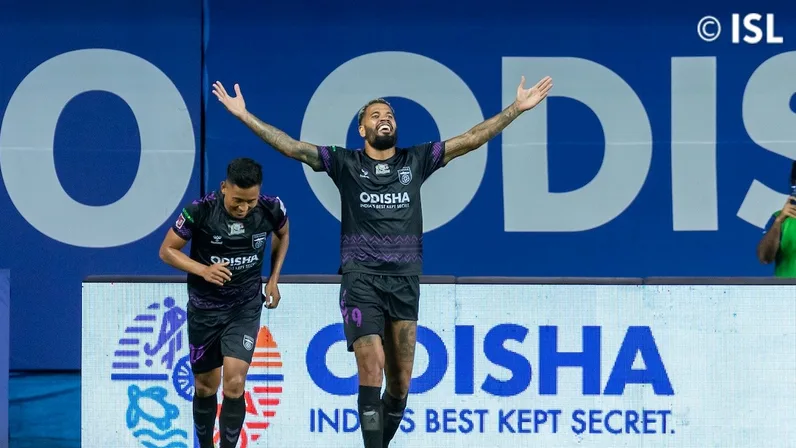 The Kalinga Warriors did not lament the miss for long though, as Jonathas redeemed himself only a minute later. The Marina Machans’ backline failed to deal with a cross and the ball fell kindly for Thoiba, who tried finding Jonathas at the far post with a cross. The former Hannover 96 striker’s initial header was blocked but the ball somehow landed for him again, and this time around, he made no mistake in giving Odisha the crucial lead.

Garcia tried injecting fresh legs by introducing Mawihmingthanga it almost had an instant impact. In the 64th minute, he received a pass from Jonathas and pulled the trigger, but his shot was well blocked by Slavko Damjanovic.

It turned out to be a costly miss as the two-time champions restored parity in the 69th minute through Valskis. Ali delivered a cross from the right flank with Valskis being the intended target, and the Lithuanian striker did well to beat his marker and head it home, thereby rescuing a point for his team.

Chennaiyin and Odisha remain in eighth and seventh position respectively as this draw has not been beneficial for either side. The Kalinga Warriors will now face Bengaluru on Monday whereas the Marina Machans will lock horns with Jamshedpur on Sunday.