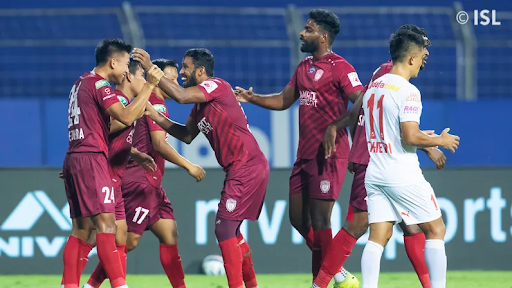 This was only NorthEast United’s third win of the season

NorthEast United pulled off a surprising 2-1 win against Bengaluru in ‘Match 94’ of the 2021-22 Indian Super League season. Deshorn Brown and Laldanmawia Ralte were on target for the Highlanders. while the Blues’ lone goal was scored by Cleiton Silva.

NorthEast United head coach Khalid Jamil made five changes to the team that lost 3-1 against ATK Mohun Bagan. Mirshad Michu replaced Subhasish Roy in goal, while in defense, Provat Lakra and Patrick Flottmann came in Gurjinder Kumar and Mashoor Shereef respectively. Marco Sahanek was replaced with Imran Khan to maintain overseas count, whilst Brown was reinstated in the starting XI at Marcelinho’s expense.

Bengaluru head coach Marco Pezzaiouli also experimented with his starting XI as he made four tweaks. Lara Sharma came in for Gurpreet Singh Sandhu in goal, while the suspended Roshan Naorem was replaced by Namgyal Bhutia. New signing Yaya Banaya was handed his first start at Pratik Chaudhari’s expense, whereas Prince Ibara was sacrificed for Udanta Singh.

As many would have expected, the Blues had the better start and could have taken the lead as early as the second minute when Udanta pulled the trigger from outside the box, but Mirshad was alert to avert the danger. In the 20th minute, skipper Sunil Chhetri tried his luck but his shot was blocked by Zakaria Diallo.

Despite Bengaluru’s early press, the first big chance of the game fell to the Highlanders in the 21st minute when Joe Zoherliana delivered an inch-perfect cross for an unmarked Imran, but he failed to keep his header on target.

Barely a minute later, a callous mistake from Parag Shrivas provided Brown with an opportunity of getting his name on the scoresheet but his effort struck the crossbar. The Highlanders’ onslaught continued as Hernan Santana joined the party in the 27th-minute when he went for glory from a long way out. His shot was certainly the best of the lot, but a fantastic save by Lara kept the scoreline at 0-0.

The Bengaluru custodian was called into action once again barely two minutes after the resumption when VP Suhair flicked on a Hernan Santana set-piece, but the 22-year-old was up to the task this time as well.

Nine minutes later, it was Mirshad’s turn to prove his mettle as Chhetri squandered another big opportunity. He found himself one-on-one with the Highlanders’ custodian after receiving a defense-splitting ball from Udanta, but could not guide his shot to the back to the net.

The breakthrough eventually came in the 66th minute of the game when Danish Farooq launched a dangerous cross from the left flank. Both Cleiton and Mirshad went for it, but the Brazilian’s positioning sense helped him beat the goalie and guide the cross into the net. 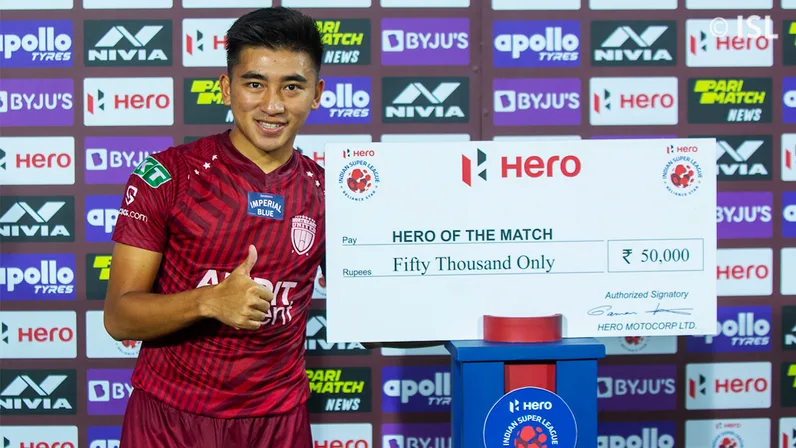 Joe Zoherliana had a fantastic game for the Highlanders

Pezzaiouli’s men could not celebrate the goal for long though, as the Highlanders equalized just eight minutes later. Zoherliana delivered another good ball from the right flank and despite being marked by the towering figure of Banana, Brown managed to head the cross home.

NorthEast United was not done yet as two substitutes combined to score the winner for them in the 80th minute. Marcelinho outfoxed a host of white shirts and waltzed into the penalty box before taking a shot, and while his effort was denied by the trailing leg of Lara, Ralte was in the right place at the right place to make it 2-1 for Jamil’s team.

With this win, NorthEast United has climbed to the tenth position and will now take on Jamshedpur on Friday while sixth-placed Bengaluru will be up against Odisha on Monday.