Hyderabad tops the points table after winning 1-0 against Bengaluru

Hyderabad remained unbeaten in the Indian Super League after a narrow 1-0 victory over Bengaluru at the G.M.C. Balayogi Athletic Stadium in Hyderabad.

Bartholomew Ogbeche (’83) got the only goal of the game to keep Hyderabad at the top of the league table. The loss, Simon Grayson’s first since taking over this summer, kept Bengaluru in the fourth position on the table.

Manolo Marquez made just one change to the Starting XI from the last win over NorthEast United as Akash Mishra came back from an injury to make the backline stronger.

Hyderabad had Laxmikant Kattimani as their goalkeeper with Odei Onaindia and Chinglensana Singh being in the heart of Hyderabad’s defense. The duo were joined by Nikhil Poojary and Mishra in the flanks.

Joao Victor and Hitesh Sharma act as the central lynchpin to the Nizams’ midfield with Mohammad Yasir and Halicharan Narzary playing in the wings. Bartholomew Ogbeche and Javi Siverio were the two forwards for the defending champions in this game.

There were more than just a few changes to the starting XI that Grayson chose to begin the game with. Spanish midfielder Javi Hernandez made his first start for Bengaluru in the League, as Roy Krishna missed out on the fixture with an injury. Jayesh Rane and Namgyal Bhutia too were handed starts, with Suresh Wangjam and Prabir Das taking their place on the Blues’ bench.

Bengaluru continued to show their trust in Mr. Dependable Gurpreet Singh Sandhu as the goalkeeper of the team. The troika of Aleksandar Jovanovic, Sandesh Jhingan, and Alan Costa sat just ahead of the Indian custodian forming a back three.

Naorem Roshan Singh and Namgyal were deployed as wing-backs by Grayson who wanted to flood heavily whilst in transition from defense to offense. The midfield responsibilities were shared by Bruno Ramires and Jayesh who just sat behind Hernandez. Sunil Chhetri and Sivasakthi Narayanan formed the attack for the Blues. 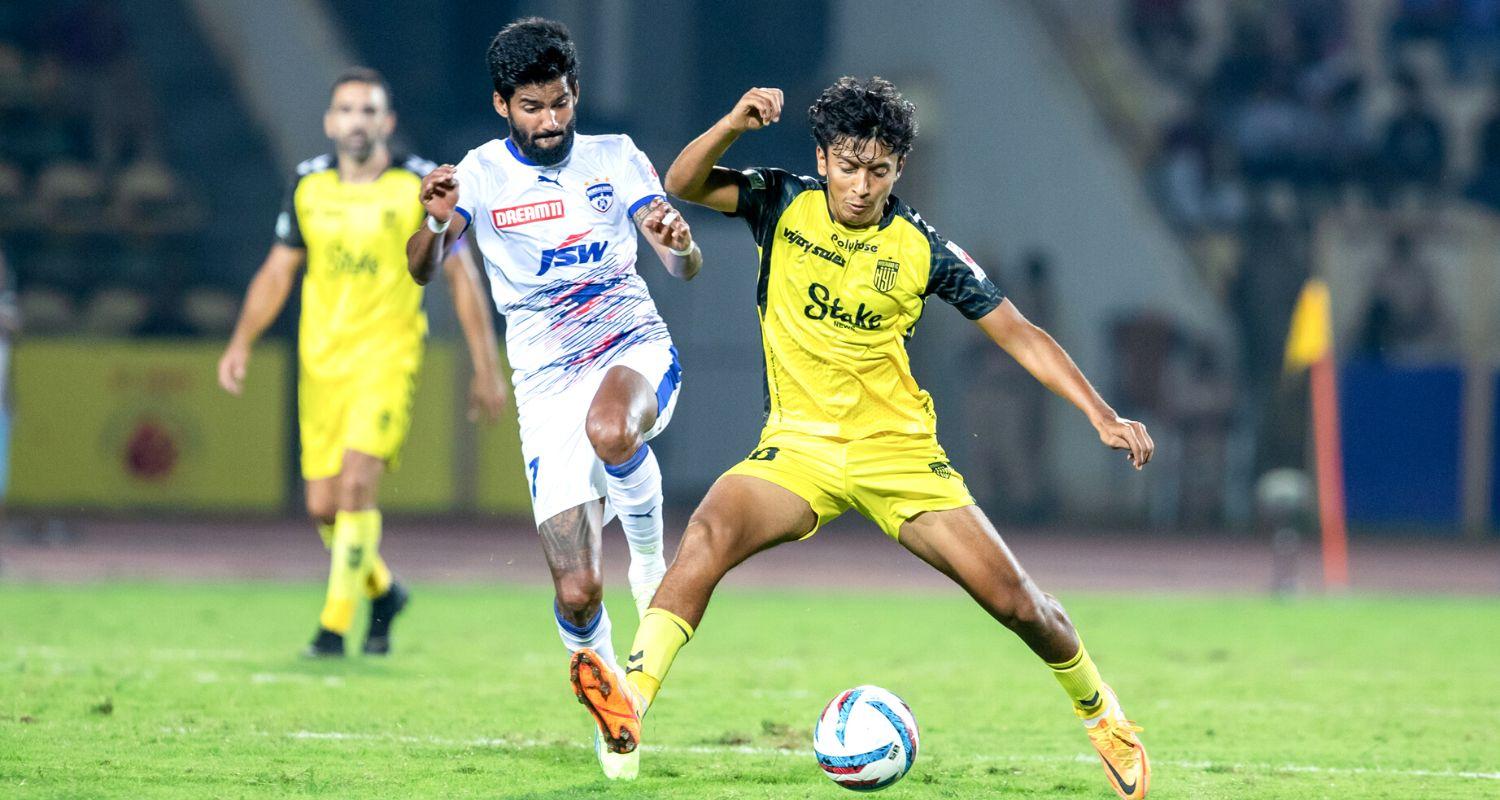 Both clubs headed into this match undefeated with four points on board after two matches. The two sides were quite solid at the back in the first half with neither goalkeeper needing to make any saves. The two best chances of the half fell to Hyderabad’s Javier Siverio.

The second one was the easier one – Mohammad Yasir found Siviero lurking in front of the Bengaluru goal, and put in a perfectly weighted pass with his left foot, but the striker couldn’t get the right contact with his head and glanced his header wide.

Hyderabad found some space on the wings in the first couple of minutes but wasn’t able to find the right cross. Ogbeche, who was the league’s top goalscorer last season, was kept quiet by Bengaluru’s five-man backline. Alan Costa, in particular, was impressive from his right centre-back position for Bengaluru.

Bengaluru captain Sunil Chettri, who was making his 100th appearance for the club – and became the first player to achieve this for a single ISL club – showed his composure and quality every time he got on the ball, but Hyderabad did a good job of making sure he wasn’t being supplied with the ball regularly.

Siverio had another great headed opportunity in the 63rd minute but Gurpreet was at the right place to deny him. Both teams made some attacking changes with 75 minutes gone. Leon Augustine had come on for Sivasakthi in the 64th minute, this was followed by double substitutions from both sides 10 minutes later. 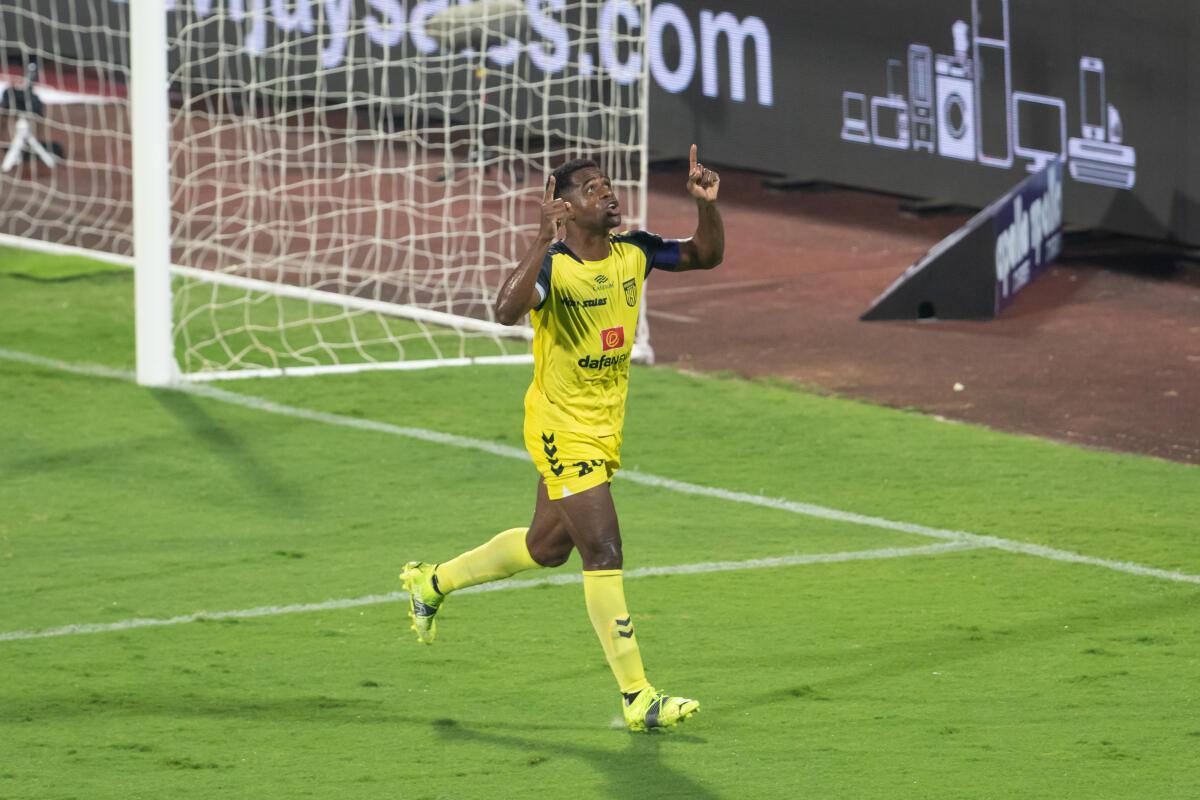 The deadlock was finally broken in the 83rd minute by Ogbeche, giving Hyderabad a 1-0 lead. Borja Herrera’s corner was tamely pushed by Gurpreet into the path of Ogbeche, who headed home his second goal of the campaign. That was enough for Hyderabad to get all three points. They now sit on seven points, with Bengaluru on four.

Ogbeche, the match winner, was named the Player of the Match on the night but the likes of Poojary, Hitesh, Onaindia and Chinglensana were all at the top of their game, to help Hyderabad take home all three points on their first game back at the Gachibowli Stadium in over two years.

Hyderabad will be hosting Goa next on Saturday, whereas Bengaluru will be heading to the Kalinga Stadium in Bhubaneswar to face Odisha on Thursday after a relatively shorter break.