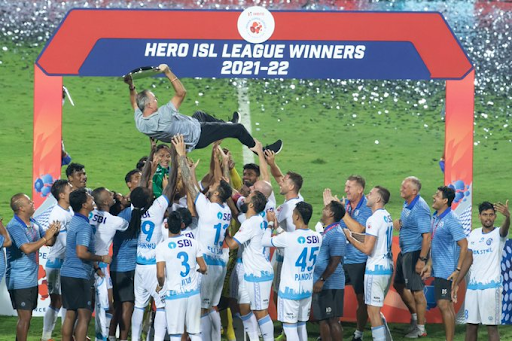 Jamshedpur was crowned with their maiden league winners’ shield as they defeated ATK Mohun Bagan 1-0 in ‘Match 110’ of the 2021-22 Indian Super League season. Ritwik Das scored the solitary goal for the Red Miners.

ATK Mohun Bagan head coach Juan Ferrando made one change to the team that won 1-0 against Chennaiyin as Deepak Tangri was replaced by veteran Lenny Rodrigues in the middle of the park.

On the other hand, Jamshedpur head coach Owen Coyle made three tweaks to his starting XI after a 5-1 rout against Odisha. Captain Peter Hartley returned in the backline at PC Laldinpuia’s expense, whereas to maintain overseas count, the former Burnley manager had to replace Alex Lima with Jitendra Singh in the midfield. Besides that, Boris Singh Thangjam was preferred to Seimenlen Doungel for the right-wing position.

Needing a victory by a minimum margin of two goals, the Mariners understandably started on the front foot. They got an early free-kick in the 7th minute but Liston Colaco’s effort struck Jamshedpur’s wall.

Ten minutes later, Colaco played a fantastic ball from the left flank for Joni Kauko, who was unmarked inside the box. While the Finnish midfielder’s shot was both powerful and on target, Hartley used his experience to premeditate the proceedings and be at the right place, at the right time, to block the strike.

Jamshedpur’s first chance came a couple of minutes later when Laldinliana Renthlei floated in a perfectly weighted cross for Daniel Chima Chukwu but the Nigerian marksman’s shot was saved by Amrinder Singh in the ATK Mohun Bagan goal.

Despite the Mariners’ relentless pressure, the best chance of the first half fell to Coyle’s team in the 41st minute when Ritwik stole the ball from Pritam Kotal and made a darting run down the left flank. With only Amrinder to beat, he could have gone for glory himself but tried to be selfless by squaring it to Chukwu. However, it proved to be an error in judgement as his pass was cut out by a player in Green and Maroon.

The first opportunity of the second half came the Red Miners’ way as well, with Ritwik earning a free-kick from a dangerous position. As he almost always does, Greg Stewart took the responsibility on his shoulder and struck his shot well, but Amrinder was alert to avert the danger once again. 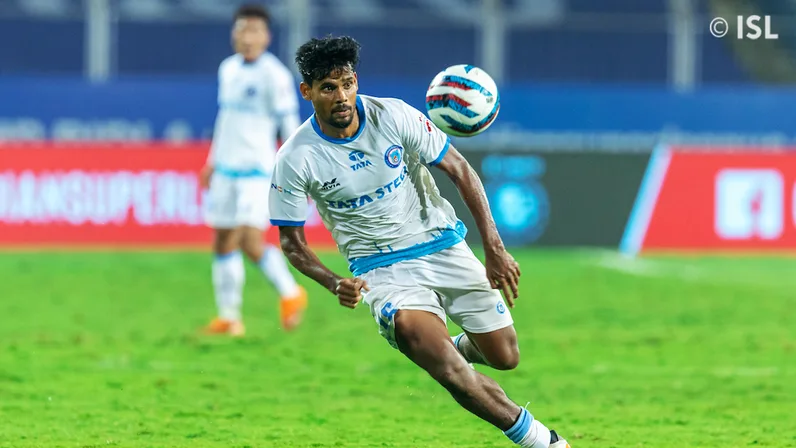 Ritwik Das had an outstanding game for the Red Miners

However, Coyle’s men did not have to rue the missed chance for long as the same pair combined to break the deadlock in the 57th minute. Stewart pulled the trigger from outside the box, and though his effort was blocked by Tiri, the rebound fell to Ritwik. The 25-year-old winger had a few defenders in front of him but did well to thread his shot between them, finding the back of the net in an elegantly.

With nothing working in his team’s favor, Aussie striker David Williams went for glory from outside the box in the 66th minute but failed to beat the Red Miners’ custodian, TP Rehenesh. The lad from Kerala was called into action once again in the 85th minute when Liston struck a free-kick sweetly, but Rehenesh did well to keep the scoreline at 1-0.

The Red Miners had the chance of doubling their lead in the 91st minute when Ritwik’s pass from the left flank found substitute Jordan Murray in space inside the box, but he had his shot blocked by one of Ferrando’s men. As the concluding act of the match, Kauko attempted a cheeky finish in the 95th minute, but as was the case throughout the match for the Mariners, his shot was not on target.

Shield winners Jamshedpur will now take on Kerala Blasters in the semi-finals, which will be played on 11th and 15th March. As for ATK Mohun Bagan, who finished their league campaign in the third position, they will take on Hyderabad in the semi-finals on 12th and 16th March at the Bambolim Stadium.