India’s disastrous run in friendlies continued as they suffered a 2-0 defeat against Jordan to register their third consecutive loss. Munther Abu Amarah and Mohammad Abu Zrayq were on the scoresheet for the Chivalrous.

Igor Stimac played a fairly defensive set-up for this game, including five defenders in Subhasish Bose, Sandesh Jhingan, Akash Mishra, Pritam Kotal and Anwar Ali. Meanwhile, the onus of scoring goals was on the shoulders of skipper Sunil Chhetri and Manvir Singh with Glan Martins, Anirudh Thapa, and Sahal Abdul Samad supporting the duo from the midfield.

On the other hand, Adnan Hamad took a different route and went for the opposite approach to Stimac’s. He set his team up with three intimidating attackers upfront – Mahmoud Al-Mardi, Ali Olwan, and Musa Al-Taamari.

The game had a pretty edgy start, where both teams predominantly cancelled each other out in the midfield. The first major chance of the game came in the 18th minute, and that too, because of a goalkeeping howler by Gurpreet Singh Sandhu but the boys in blue were lucky to come out of it unscathed.

Hamad’s team got another opportunity in the 28th minute when Al-Mardi launched a cross into the box for Olwan, but Akash was alert to clear the danger. However, his clearance fell kindly for Ehsan Haddad, who failed to utilize the opportunity

A couple of minutes later, Al-Muharraq forward Al-Mardi decided to pull the trigger himself, but his attempt missed the target by a whisker. The last chance of the first half came in the 44th minute when Jordan got a free-kick, but Gurpreet saved Baha Suleiman’s shot.

After doing almost nothing from an attacking standpoint in the entire first half, Stimac’s team almost broke the deadlock only four minutes into the second period, Sahal Abdul Samad made a darting run from the flanks and eventually went as far as the penalty box, but Jordan’s backline eventually proved too stern to get past.

Jordan got back in the game after Samad’s chance and they should have scored just before the hour-mark, when a perfectly-weighted cross from the left wing found Hamad’s most reliable goal-scorer, Hamza Al-Dardour completely unmarked. However, the Al-Ramtha striker failed to keep his shot on goal.

Completely against the run of play, India almost opened the scoring five minutes later when Mohammad Yasir struck the crossbar with a fantastic freekick. Three minutes later, the boys in blue had yet another chance as a corner found Sandesh Jhingan unmarked, but his header was not on target.

That was about it for India’s resilience, as Jordan finally managed to score the seemingly elusive goal in the 75th minute. Having just come on as a substitute, Abu Amara found himself at the end of a long lobbed pass and the Al-Wehdat man made no mistake in beating Gurpreet with his precise and powerful shot. 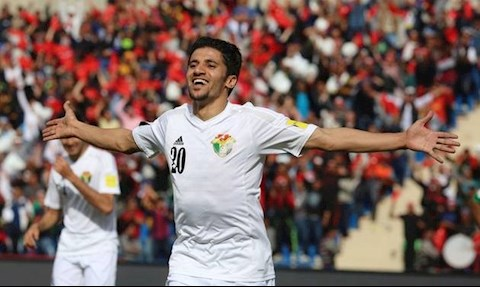 India did get a chance of scoring a late equalizer in the additional time when Sandesh tried to head a pass towards substitute Ishan Pandita, but defender Tareq Khattab used all of his experience to get to the ball before the Jamshedpur attacker did.

Meanwhile, it was not the last chance of the match as Jordan doubled their lead only seconds before the full-time whistle. Having scored the first goal, Abu Amarah turned the provider here as he played a pass for Mohammad Aby Zrayq, who had the simplest of tasks of tucking the ball into an empty net.India will now focus on their 2023 AFC Asian Cup qualification campaign, which will start with a match against Cambodia on 8th June. On the other hand, Jordan will face a much tougher opponent in Australia in their next friendly game, which is scheduled to be held on 1st June.