There is seemingly no end to East Bengal‘s winless streak as the Red and Golds were held to a 1-1 draw by Hyderabad on Thursday. Manolo Diaz’s men took the lead early on courtesy of a brilliant free-kick by Amir Dervisevic while Hyderabad star striker Bartholomew Ogbeche restored parity in the match.

Diaz had to make quite a few changes to his starting XI with striker Antonio Perosevic currently serving a suspension. Amarjit Singh Kiyam was deployed on the right flank while Joyner Lourenco operated behind him at right-back as Raju Gaikwad moved to the heart of the defense in Franjo Prce’s absence.

On the other hand, Hyderabad coach Manolo Marquez fielded an attacking lineup as Edu Garcia returned to the starting XI while Nikhil Poojari featured as a right-back in place of Asish Rai.

The Nizams had a bright start to the match with Joel Chianese testing Arindam Bhattacharja in the 13th minute but the Torchbearers skipper was up to the task. Six minutes later, youngster Lalrinliana Hnamte made a darting run but was stopped in his tracks by Chinglensana Singh giving the Kolkata-based team a freekick from a dangerous position.

Dervisevic made full use of the opportunity as his strong left-footed strike caught Laxmikant Kattimani off-guard, handing East Bengal the lead. The goal worked a spring in their steps as they dominated the next phase but Diaz’s men missed a golden chance to double their lead. 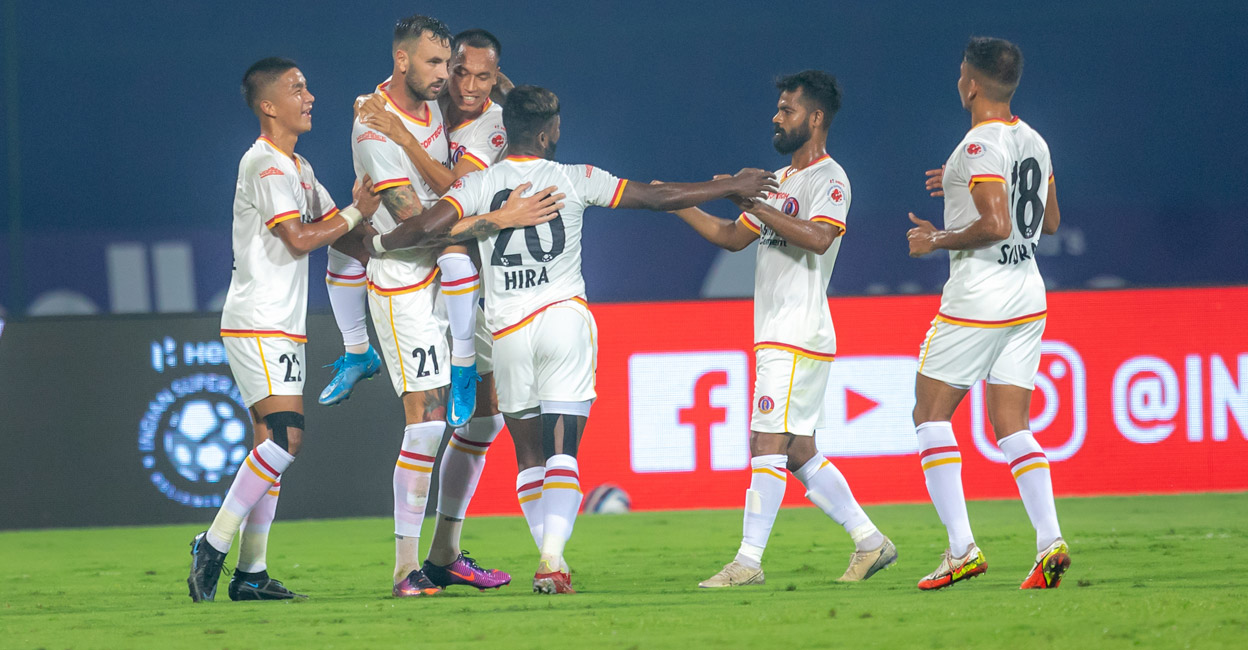 In the 28th minute, a sublime defense-splitting through ball by Hnamte found Daniel Chima Chukwu unmarked with only the goalkeeper to beat, but the Nigerian frontman could not get a proper connection and dragged his shot wide.

That miss was a wake-up call for the Nizams, who responded well and eventually got back in the game in the 35th minute. A brilliant run and cross by Aniket Jadhav from the left flank should have been headed out by Raju Gaikwad but the experienced defender mistimed his jump leaving the clinical Ogbeche in open space. From such a close range, the goal-machine was never expected to miss as his header made the scoreline 1-1 along with setting a record of becoming the first Hyderabad player to score in 6 consecutive matches.

East Bengal almost came up with an instant retaliation when Mohammed Rafique’s ambitious effort from a long-range left Kattimani stranded but the ball could only find the crossbar as East Bengal’s agony continued.

The second half was a rather uneventful one as most of the game was played in midfield with both teams looking to cancel each other out. Both coaches tried to freshen up things by bringing in new players but it did not affect the flow of the game. At the hour mark, Javi Siverio came in for Chianese for Hyderabad while Diaz also brought in Semboi Haokip and Balwant Singh in a bid to inject fresh legs and rejuvenate his team.

East Bengal could have taken the all-important lead in the 82nd minute when Rafique drilled in a cross from the right flank and Kattimani came out to punch but failed completely. The cross eventually met the head of Balwant, who had all the time in the world to keep it on target but somehow failed to do so.

Hyderabad also got a half-chance just three minutes later when Bhattacharja made a mess of a powerful Sahil Tavora shot. Luckily for the former ATK Mohun Bagan goalkeeper, the rebound was cleared away by a white shirt before any of Marquez’s attackers could react.

With the draw, Hyderabad has leapfrogged Jamshedpur in the 2021-22 Indian Super League standings to take the second spot. They will now face Odisha on Tuesday, whereas last-placed East Bengal will lock horns with Bengaluru after an 11-day break.