Hyderabad emerged as the champions and lifted their maiden ISL trophy  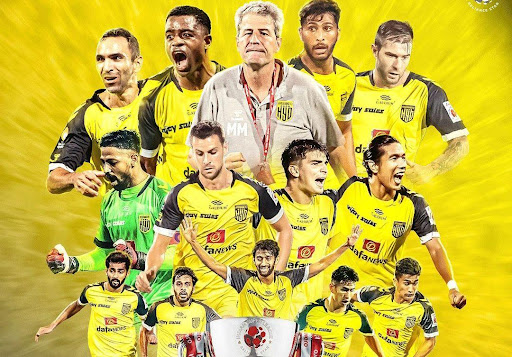 The Hyderabad franchise achieved glory in its second year of existence and has laid down a roadmap for clubs like Kerala Blasters and NorthEast United that have been part of the Indian Super League and yet to get their hands on the prestigious championship.

The head coach Manolo Marquez joined the club in 2020 when Albert Roca left the position to join the Barcelona coaching staff. Despite not getting time to make signings and pre-season preparations, Manolo had a decent season where Hyderabad narrowly missed out on the semifinal. The previous season’s performance helped him to extend his stay and the Spaniard gaffer finally delivered the promise which was made to the Deccan Legion.

Hyderabad finished their league stage campaign in the second position of points table although they were five points behind the table-toppers Jamshedpur. The Yellow Army registered 11 victories and 5 draws to make a total of 37 points from the 20 fixtures of the league stage. And then the Nizams went on to breach the forts of ATK Mohun Bagan and Kerala Blasters to claim supremacy. 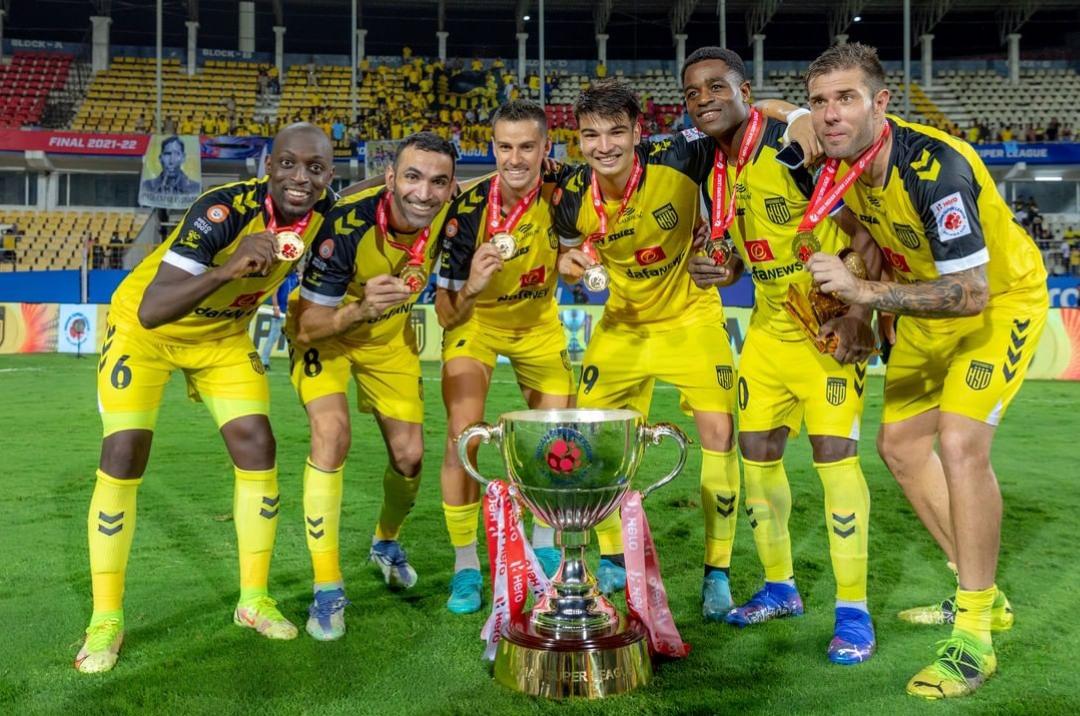 ‘The Hyderabadi foreign gang’ posing with the trophy

The defensive line of HFC was led by Juanan who achieved his fourth major trophy and second ISL trophy since joining the Indian club football in 2016. The 33-year-old Brazilian skipper of Hyderabad, João Victor operated like an engine of the line and also inspired his team to have beliefs in Manolo’s tactical lessons.

Khassa Camara was added to the roster as a replacement for Edu Garcia is yet to play up to his true potential in yellow colours but we will hopefully witness it in near future.

The 37-year-old veteran Bartholomew Ogbeche outclassed every other goalscorer this season to claim the prestigious ISL Golden Boot after making it to the Top 3 twice in ISL history. Bart was part of the ISL double-winning Mumbai City side in the previous season as a backup of Adam Le Fondre and joined the Hyderabad squad to fill the void left by Aridane Santana. He scored 18 goals and a solitary assist from 20 appearances with an astonishing average of 0.9 goals per game. The Nigerian striker received ideal support from Joel Chianese, Edu Garcia, and Javier Siverio who shared the scoring responsibilities with him quite often.

Left-back Akash Mishra who debuted in ISL 2020-21 as a teenager dons a prominent role in the Hyderabad system. The 20-year-old defender has shown immense consistency by carrying the red-hot form of the previous season and due to positioning prowess, he is capable of covering both defending and attacking aspects cosily. As the full-back had a contribution of 2 goals and 3 assists in the offensive department while 97 tackles, 57 interceptions and 62 clearances in the defensive department.

The Maharashtrian hulk Aniket Jadhav also received his career’s first call-up for Indian National Team after impressing everyone while wearing yellow colours. The 21-year-old forward showcased his versatility in the attacking line for the first time in top-flight football as earlier he was only considered a striking prospect.

How did it conclude?

Hyderabad got ATK Mohun Bagan as semi-final opponents who were just a single point behind them at the conclusion of the league stage. They thumped the Mariners with a 3-1 victory in the first leg and maintained their precious lead despite losing the second leg on a 0-1 scoreline.

Telugoons prevailed in their maiden ISL final to take on the challenge of another yellow side, Kerala Blasters. They were trailing by 0-1 scoreline when the play entered into the last minutes but then an incredible volley from Sahil Tavora took the game into extra-time followed by a penalty shootout. 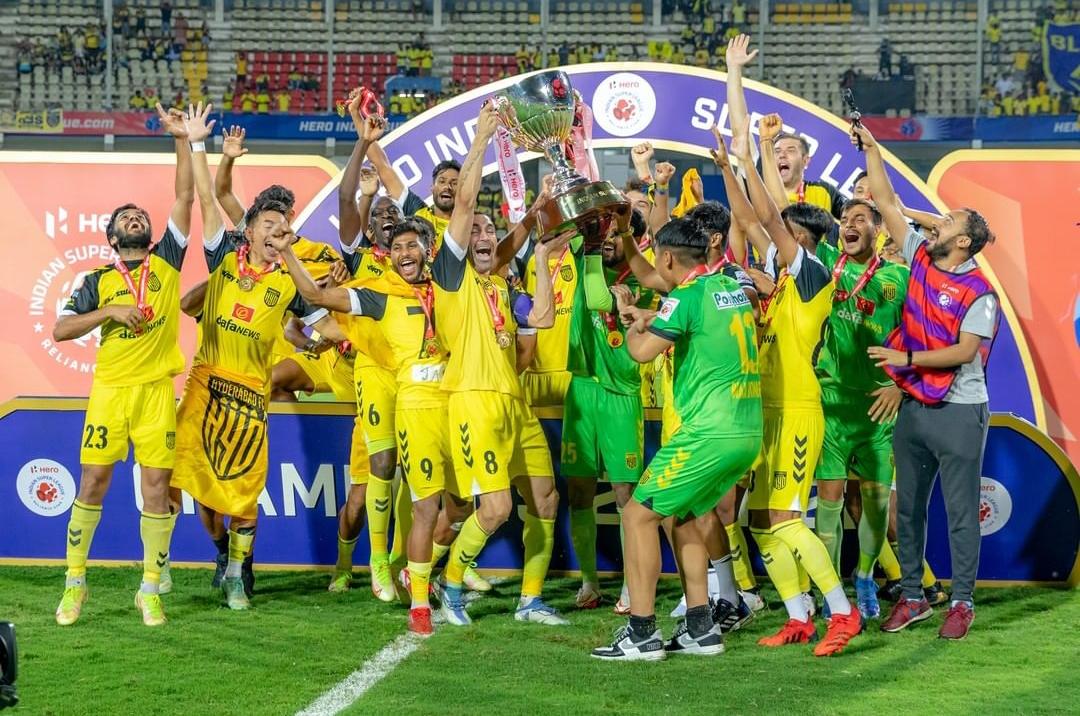 Vice-captain Kattimani stood up for his club and went on to deny three of four shots taken from the penalty spot. The vast experience and extreme survival skills helped Kattimani to perform when his team needed him the most and the shot-stopper also went on to claim the ‘Hero of the Match’ award at the grandest stage of the 2021-22 season. Javier Siverio missed his chance but Victor, Camara, and Halicharan Narzary converted from the spot beautifully and ensured the first-ever ISL glory to the city of Hyderabad.

Hyderabad FC’s title-winning conquest is a perfect example of how any side can achieve glory with team efforts. Every member of the HFC roster had their valuable contributions in this triumphant journey. Especially domestic stalwarts like Chinglensana Singh, Sahil Tavora, Aniket Jadhav, Laxmikant Kattimani, Nikhil Poojari, Asish Rai etc. were strengths of the team which made the difference between them and other competitors.

Manolo Marquez weighed his tactics towards scoring a chunk of goals and converting every possible chance to actuate the scoresheet as the Telugoons scored 20 goals more than their previous season total. Hyderabad’s tally of 47 goals was highest in the 2020-21 ISL season including 14 contributors and eight among them were Indian goalscorers.

Players from the champion roster are always in demand in the ISL transfer market hence securing the services of core players should be the top priority of Hyderabad authorities.

Ogbeche will be 38 after a few months and a primary search to appoint his successor should be initiated as the Nigerian striker may not play the 2022-23 season with the same energy as he did in previous seasons. The yellow army will be marching to successfully defend their title in the upcoming season which is done by any previous champions of the Indian Super League.