Hyderabad registered a narrow win over Goa on Saturday courtesy of an early goal from Javier Siverio to go top of the ISL standings.

Both teams’ unbeaten record was at stake as they faced off at the Gachibowli Stadium in the capital of Telangana. The start of the match saw multiple interruptions due to floodlight failure and it took some time to get things going.

Much to the delight of the home fans, the Nizams were ahead after just 10 minutes. It came out of nowhere as the visitors were caught sleeping after a swift throw-in. The league’s all-time top-scorer Bartholomew Ogbeche flicked the ball behind the defenders with his header and Javier Siverio finished from a tight angle to put his side in the driving seat.

The Gaurs had a golden opportunity to bring themselves back on level terms but Redeem Tlang despite being one on one against Laxmikant Kattimani tried to be too clever and his attempted chip failed to beat the veteran custodian.

Both sides kept the ball very well but neither side could create anything noteworthy until the latter stages of the first half. There were half-chances at best, but despite the quality on display, Hyderabad and Goa failed to produce the final output.

At the start of the second half, Carlos Pena made two changes, replacing Redeem Tlang and Marc Valiente with Makan Chote and Fares Arnaout respectively in his attempts to turn around the fixture in his side’s favour. 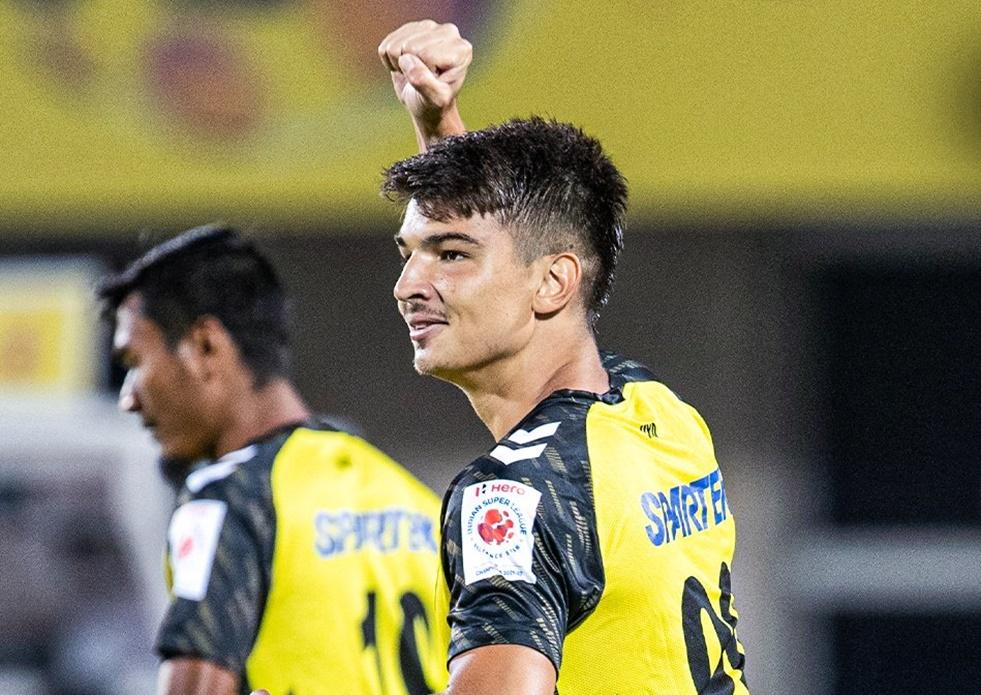 Halicharan Narzary had a quiet first half by his standards but he had a great chance to double the hosts’ lead. Yasir found his opposite winger with a cross and the former struck a half volley although the ball deflected off Ayush Chhetri and struck the upright, much to Arshdeep Singh’s relief.

The second half produced nearly as many chances early on as the first half did in total. It was Goa’s turn next as Iker Guarrotxena’s outside of the boot pass found Noah Sadaoui but Kattimani came out to cut the angle, the Moroccan forward tried the audacious curler from near the edge of the box but he overcooked his effort.

Shortly after the hour mark, Edu Bedia crossed for Fares, although his attempt was deflected out for a corner. A couple of corners followed suit but nothing of note came from those attempts.

Goa was quickly turning the screw and Manolo Marquez brought Borja Herrera in his attempts to keep his side ahead, replacing Bart Ogbeche. Pena also made a couple of changes, replacing Brandon Fernandes and Noah with Brison Fernandes and Alvaro Vazquez.

In the 73rd minute a good chance for the Nizams, as there was a goal-mouth scramble after Arshdeep failed to collect the ball cleanly but the Goan defence stood tall. A minute later, Yasir fed Borja with an inch-perfect lobbed cross but the latter failed to direct his header towards the goal.

The defending champions were dealt a huge blow as Goa earned a penalty in the 82nd minute. A high boot from Akash Mishra saw him penalised after a poor challenge on Vazquez. The Spaniard picked himself up only to fire the spot-kick wide. Pena’s side came close with a subsequent free-kick as they peppered the Hyderabad goal but the hosts’ defence stood tall.

Borja had another chance with his right foot strike but the effort sailed wide of the posts. Six minutes were added to the regulation time as Marquez’s side tried to extend their lead with multiple attempts at the death but the Gaurs somehow cleared their lines.

Coach Pena had his head in his hands as he couldn’t believe how Bedia missed a subsequent chance as he latched onto a deep cross but Kattimani made a great save in the 95th minute. Hyderabad held on for dear life and went top with the hard-fought win over Goa. With that, the visitors’ unbeaten run came to an end, as they dropped to fourth in the ISL table.