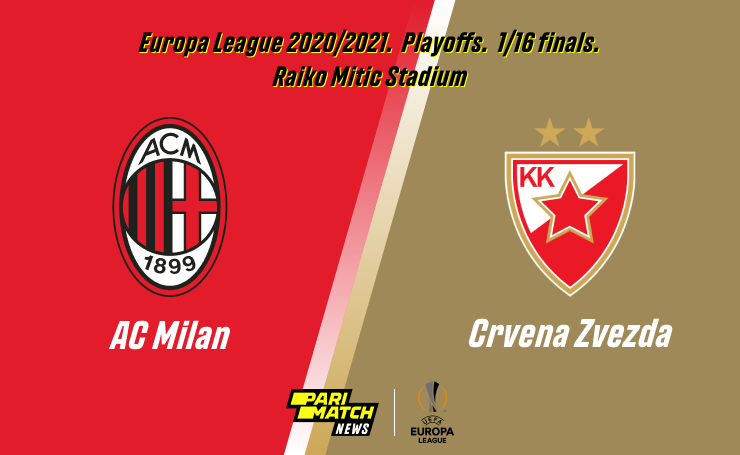 On Thursday, February 18, Crvena Zvezda will host AC Milan team in the first leg of the Europa League 1/16 finals. The contenders for the Italian Serie A title will travel to Belgrade, where Dejan Stankovic’s side will be looking to contain the pressure of AC Milan and tactically outclass Stefano Pioli.

Crvena Zvezda have had a successful start to the second part of the season. The Belgrade team got two victories over Novi Pazar (3-1) and Radnicki (1-0). Milan lost unexpectedly on the weekend, 0-2 away to La Spezia. After that defeat, Inter have now relegated the Rossoneri by one point.

Milan made it through to the 1/16 finals via Group H, in which they have beat Lille, Sparta Prague and Celtic.

Last week, Milan sensationally lost to Italian Serie A newcomer La Spezia, who demolished the team 2-0. That defeat allowed Inter, after beating Lazio, to climb up to first place and become the most obvious Scudetto contender. The legendary Derby della Madonnina takes place next Sunday, but before that, the rossoneri will play in the Europa League. The opponents will be facing an unbeaten Red Star, who is being coached by Inter Milan legend Dejan Stankovic, with whom they won the UEFA Champions League in 2010. The main question that remains open before tonight’s clash is whether Milan will sacrifice their efforts for the Europa League, or focus on the fight in the domestic championship before one of Sunday’s crucial games.

Crvena Zvezda advanced to the Europa League play-offs from Group L, in which they fell behind Hoffenheim, but ahead of Liberian Slovan and Gent.

At the moment, they are already far ahead of their rivals in the domestic league, and will try to continue in the Europa League. The Serbian club have played only two official matches this year and are just beginning to lead into the season. It should be noted that the club from Belgrade is being coached by Inter Milan legend Dejan Stankovic, who will certainly try to help his beloved club on the eve of Sunday’s derby. Stankovic’s team is in a big lead in the Serbian Super League, nine points ahead of Partizan after 21 rounds. The Serbian team’s winning streak in the home division is already nine games in a row.

The teams have met in head-to-head encounters twice in the 2006-07 UEFA Champions League. In both games, AC Milan defeated Crvena Zvezda (1-0, 2-1).

Statistical preview of the match Red Star vs AC Milan:

Although AC Milan are the clear favourites for this game, Dejan Stankovic’s side can perform good football at home. Considering the upcoming derby with Inter for the championship, the team from Belgrade may be set for a rough game.