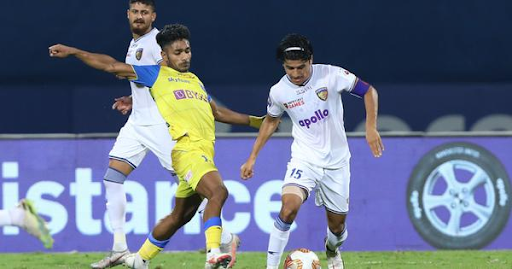 Two-time ISL champions Chennaiyin will lock horns with Kerala Blasters in ‘Match 38’ of the 2021-22 Indian Super League season at the Tilak Maidan Stadium on Wednesday.

After a slump in form, Chennaiyin returned to winning ways again by beating Odisha in their previous encounter. They have accumulated 11 points from 6 matches and are occupying fourth place in the standings, behind Hyderabad only on the basis of goal difference.

On the other hand, Kerala Blasters will be coming into this match on the back of a five-match unbeaten streak. The Tuskers are placed in the fifth position having secured 9 points from their 6 outings and could have had more if they weren’t punished for some bad refereeing decisions.

The Bozidar Bandovic era at Chennaiyin started off brilliantly as they won their first two matches against Hyderabad and NorthEast United. In their next two matches, the Marina Machans struggled to beat two Kolkata giants in East Bengal and ATK Mohun Bagan as they were restricted to draws on both occasions.

Defending champions Mumbai City handed them their first defeat of the season in the fifth encounter by a 1-0 scoreline but Bandovic’s men made a great comeback by defeating Odisha 2-1 in their last match.

Kerala Blasters had a nightmarish start suffering a 4-2 defeat against ATK Mohun Bagan in their season opener but their graph has also only risen ever since. Ivan Vukomanovic’s team secured two consecutive draws in their next two matches against NorthEast United and Bengaluru.

The Tuskers’ first win of the season came in their fourth outing where they triumphed 2-1 against Odisha. The fifth match saw them playing out a rather frustrating 1-1 draw against basement boys East Bengal followed by a fantastic and dominating performance in the 3-0 win against reigning champions Mumbai City.

When it comes to head-to-head records, Chennaiyin holds the upper hand in this particular Southern Derby. They have beaten Kerala Blasters six times while the Tuskers have got the better of the Marina Machans only thrice with seven matches ending in stalemates.

Two of those stalemates were played out last season where the first meeting ended as a scoreless draw while the second meeting produced a 1-1 scoreline where Fatkhullo Fatkhuloev opened the scoring for Chennaiyin and Gary Hooper converted a penalty to restore parity in the match. 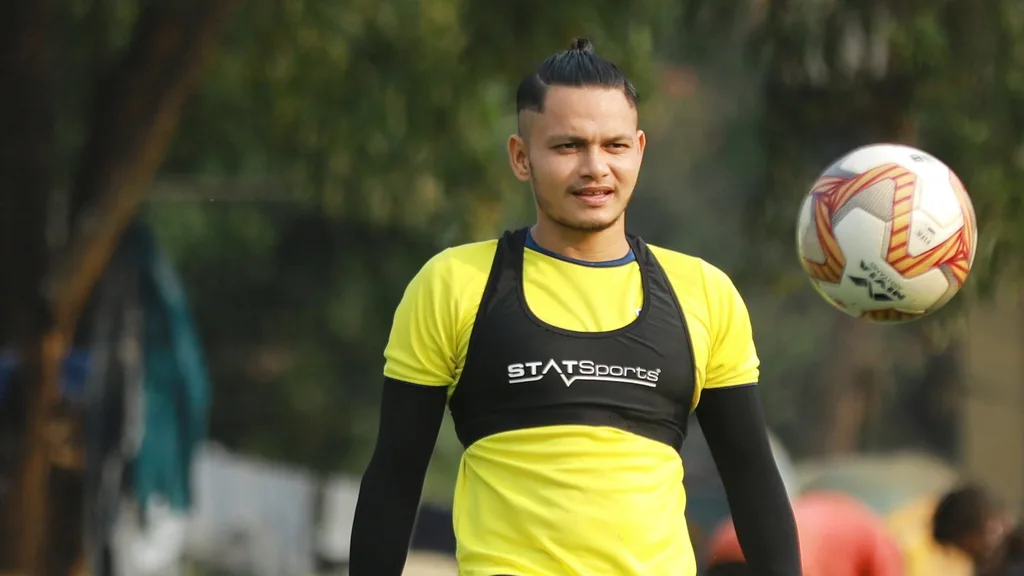 Nishu Kumar could be included in the Kerala Blasters starting XI

Bandovic took a massive risk by fielding a 3-4-1-2 formation against Odisha but it turned out to be a tactical masterclass from the former Olympiacos manager. Playing as wingbacks, Germanpreet Singh and Reagan Singh did a brilliant job to contribute in attacks and also in helping out the back three.

Jerry Lalrinzuala looked confident in his midfield role while forwards Lallianzuala Chhangte and Mirlan Murzaev caused the Odisha defense problems aplenty. Given how his team performed against the Juggernauts, Bandovic is unlikely to make any changes to his starting XI.

Ivan Vukomanovic also pulled off a masterstroke as well in Kerala’s last match against Mumbai City as the overseas attacking pairing of Jorge Pereyra Diaz and Alvaro Vazquez gave the Islanders a run for their money.

Like his Chennaiyin counterpart, the former Standard Liege manager is expected to field an unchanged lineup, though it will not be surprising to see one tweak. Returning from an injury, Harmanjot Singh Khabra did not have the greatest of games at the right-back position and the veteran could make way for Nishu Kumar.

Chennaiyin would have been clear favorites had this game been played a couple of weeks ago but given Kerala Blasters’ significant improvement over the last few matches alongside the head-to-head statistics showing how often this game has failed to produce a winner, we have predicted a 2-2 draw.