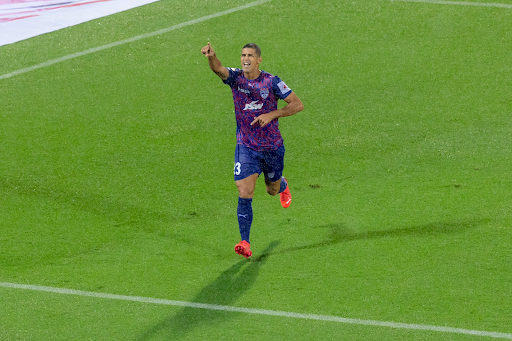 We are only two games into the 2021-22 edition of the Indian Super League but have already witnessed 12 goals. After ATK Mohun Bagan handed Kerala Blasters a 4-2 thrashing in the season opener, Bengaluru replicated the same scoreline in the second match with NorthEast United at the receiving end of the wrath this time.

With torrential downpour in Goa making the surface more suitable for ice hockey than for football, this game was always likely to be a cagey affair with mistakes aplenty. Bengaluru’s new manager, Marco Pezzaiuoli set his team up in a 4-2-3-1 formation with Alan Costa and Yrondu Musavu-King playing in the heart of the defense whilst Bruno Ramires was picked as the midfield foreigner, and Cleiton Silva completed the quartet in the attack.

On the other hand, Khalid Jamil was forced to go with an all-Indian defense with Patrick Flottmann unavailable. Hernan Santana and Khassa Camara were the two foreign midfielders with striker Deshorn Brown and Mathias Coureur completing the overseas quota in the team.

The Highlanders started brightly with Deshorn Brown getting two half-chances inside the first 10 minutes but the Jamaican striker failed to make the opportunities count.

It proved costly soon as Silva opened the scoring for the Blues by brilliantly rounding off the Highlanders goalkeeper Subhashish Roy Chowdhury. Hardly had the Bengaluru players stopped celebrating before they found themselves stripped of their one-goal advantage as Brown’s shot from a pinpoint cross from VP Suhair restored parity in the game in the 17th minute

The third goal, which was as incredible as it was sloppy, was perhaps the highlight of the game. A misdirected cross from Ashique Kuruniyan deflected off the crossbar to Udanta Singh whose powerful shot was saved spectacularly by Chowdhury. But in a rush of blood moment, NorthEast defender Mashoor Shareef rifled the ball into his own net in an extraordinary manner giving Premier League fans a Deja Vu of Santiago Vergini’s epic own goal against Southampton.

Unfortunately for Pezzaiuoli’s team, the lead did not last long this time as well with Coureur scoring the equalizer just three minutes later. Another dangerous cross from the left by Suhair was not cleared to safety by Kuruniyan who could only scuff the ball to Coureur’s path and Martinique forward made no mistake in slotting it past the helpless Gurpreet Singh Sandhu. 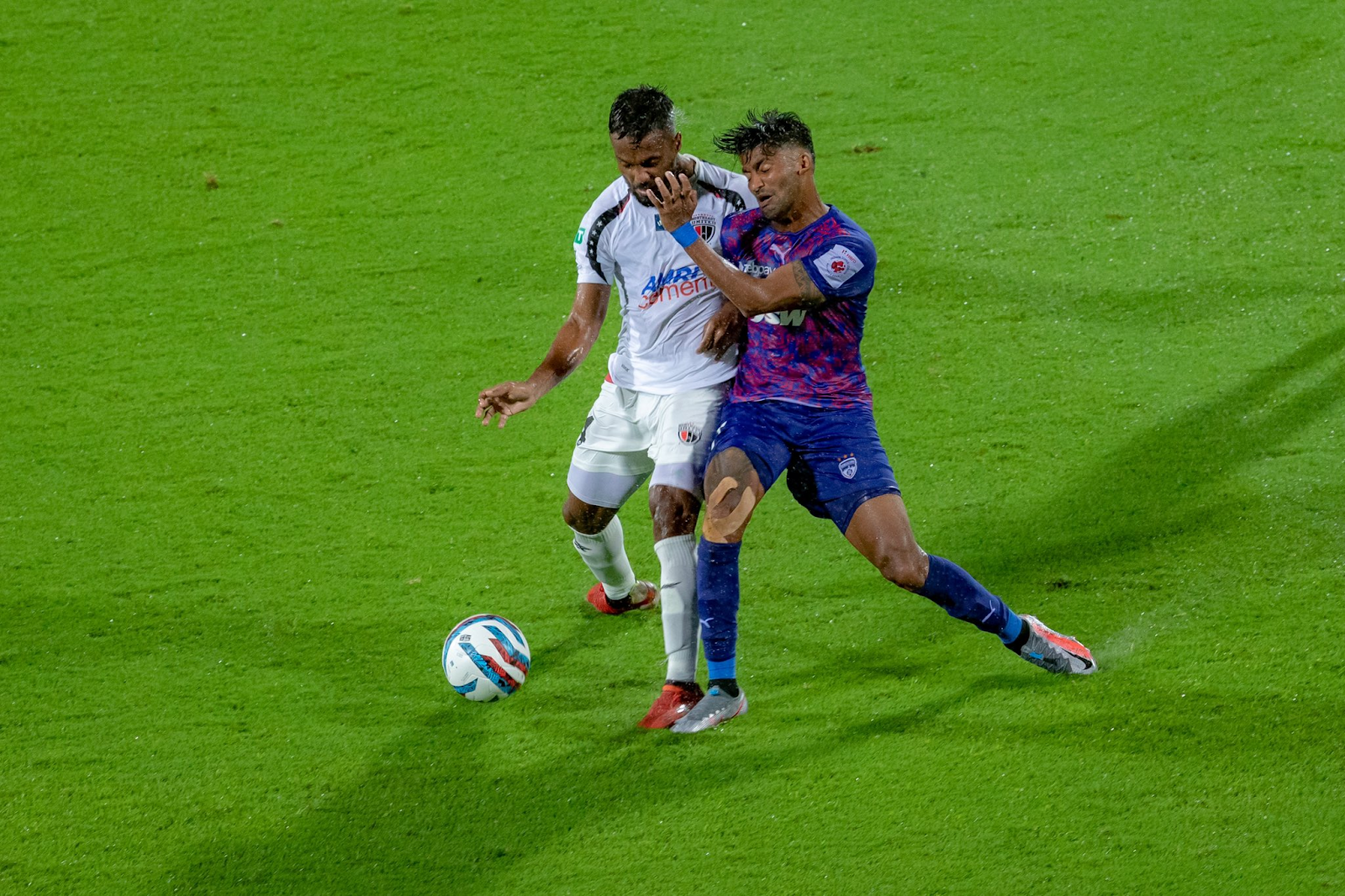 Jayesh Rane had an impressive ISL debut in Bengaluru colors

The next few minutes were cagey but Coureur’s strike worked as a spring in the Highlanders’ steps. However, as they did with the first goal, the Blues once again scored against the run of play with Jayesh Rane finding the back of the net in his first ISL game for Bengaluru. He drove his shot low with some venom and such shots are difficult to save on a slippery surface but one would have expected the experienced Roy Chowdhury to deal with it.

Unlike the first half, Sunil Chhetri & Co. dominated the proceedings in the initial phases of the second half. Jamil tried to make a tactical switch by bringing in Sehnaj Singh for Shareef, but it did not produce the desired result.

Coureur and Brown had some half-chances, whilst Silva once found himself one-on-one with the NorthEast custodian but none of those opportunities could lead to a goal. Blues substitute and star signing Prince Ibara sealed the result beyond doubt as his spectacular goal drew a curtain on the proceedings for the night.

Despite the victory, Pezzaiouli might need to make a few changes to his team as the defensive pair of King and Costa did not look convincing with inexperienced Ajith Kumar playing at right-back experiencing trouble in keeping Suhair quiet.

With Ibara showing his class in a 20-minute cameo, he could be handed a start in the next game Pratik Chowdhary and Sarthak Golui replacing King and Kumar respectively in defense.

As for the Highlanders, with their Indian backline not looking secure, Jamil might try Santana as a central defender alongside Jestin George with Sehnaj slotting in the middle of the park.