ATK Mohun Bagan left it late to pick up a 2-1 win against NorthEast United on Thursday and move up to second place in the 2022-23 Indian Super League standings.

Liston Colaco broke the deadlock in the 35th minute before Aaron Evans equalised in the 81st minute at the Vivekananda Yuba Bharati Krirangan in Kolkata. But Subhasish Bose then scored the winner in the 89th to secure the last-gasp win.

This result took ATK Mohun Bagan up into second place with 10 points while NEUFC remained at the bottom of the table.

Juan Ferrando did not make any changes to the starting line-up from the XI that snatched a point in Mumbai on Sunday. NEUFC made four changes as Marco Balbul switched from a 5-3-2 to a 4-3-2-1. Imran Khan and the Gogoi brothers – Pragyan and Parthib – were included in the line-up as Jithin MS and Matt Derbyshire dropped to the bench.

The Mariners were put under the cosh early on by the Highlanders, who didn’t seem at all deterred by playing in front of a loud Salt Lake Stadium crowd. Young striker Parthib Gogoi forced a corner just 20 seconds after kick-off, with the visitors’ forward players linking up extremely well.

Imran Khan and Romain Philippoteaux, in particular, seemed to establish a superb partnership, with the former slipping the Frenchman in on a couple of occasions. Philippoteaux even hit the side-netting after Khan had turned Subhasish Bose inside out with a superb piece of skill.

However, there were warning signs early on for a much more organized NorthEast United defense. ATK Mohun Bagan is a solid counter-attacking team and even scored through Dimitri Petratos after just two minutes, only for it to rightly be flagged offside.

Juan Ferrando’s men ultimately took their lead thanks to a quick counter. Parthib’s poor pass with his back turned to the goal and found Hugo Boumous near the halfway line. The ISL’s most prolific provider of all-time recorded his 31st assist in the competition’s history by slipping in Liston Colaco. 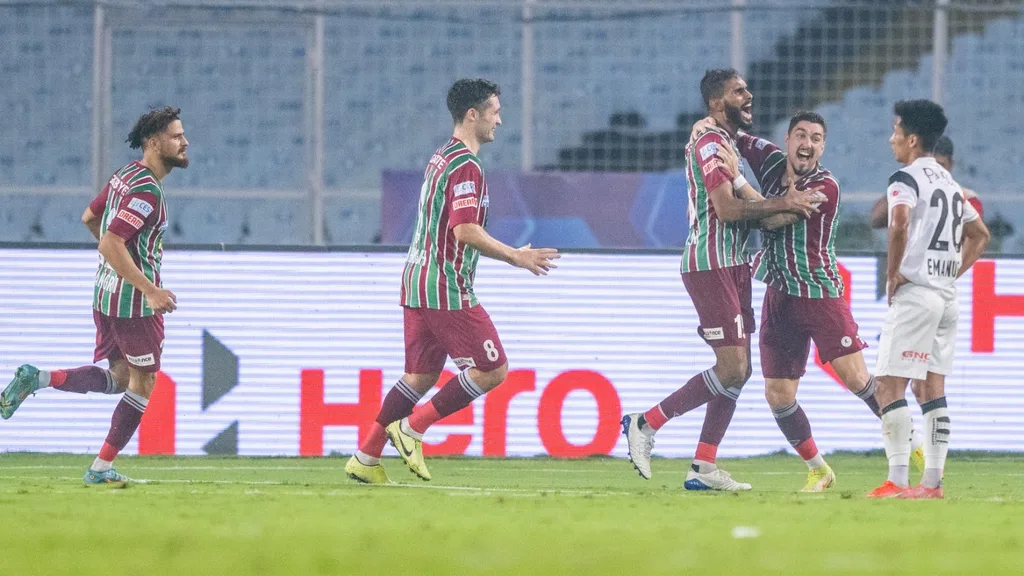 Colaco, who began the game on the left, picked up Boumous’ pass on the right and raced forward before sliding a superb finish past Mirshad Michu to make it 1-0. The goal put the hosts in the ascendancy, with Joni Kauko forcing a fantastic save from Michu just moments later.

Some smart game management then allowed ATK Mohun Bagan to then hold onto their lead as the Highlanders were left searching for answers once again.

NorthEast United began the second half like they began the first, putting ATK Mohun Bagan under pressure from the start.

They created their best chance of the opening hour in the 55th minute. A poor clearance from Asish Rai found Pragyan Gogoi outside the box and he fired an effort towards the goal that deflected off Brendan Hamill.

Parthib picked up the ball and flicked it towards the goal, but Vishal Kaith made a superb reflex save to tip it onto the post.

Just moments later, the Mariners went close to doubling their lead. Another quick counter saw them slip the ball through to Petratos, who got into a one-on-one battle with Michu. However, the forward dragged his shot wide of the near post. 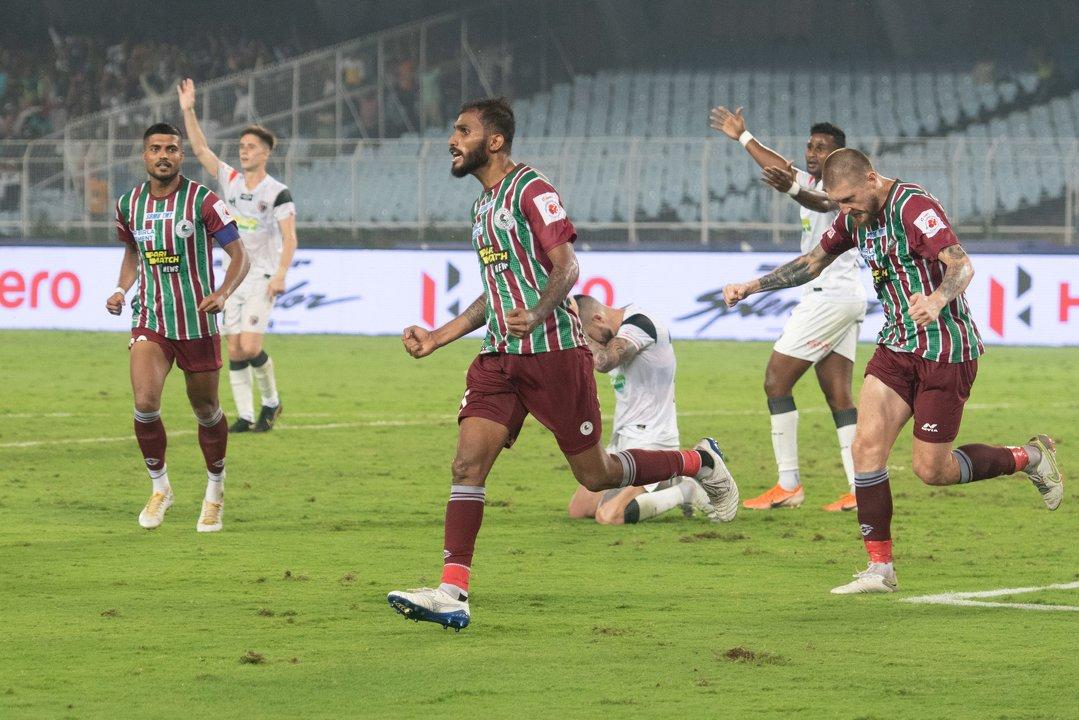 The next 20 minutes were scrappy, with a flurry of yellow cards issued to both teams as the game slowed down. ATK Mohun Bagan went close once again in the 76th minute, but substitute Carl McHugh headed wide from Petratos’ pinpoint corner.

NorthEast United made the Mariners pay for their profligacy in front of the goal by finally scoring their second goal of the ISL 2022-23 season. An error by Kaith from Jithin MS’ cross saw the Highlanders receive a corner. The delivery was splendid and a flick-on by Jon Gaztanaga was finished off with a diving header by Aaron Evans.

Evans’ strike seemed to wake the hosts up as they piled men forward in search of a winner. Kauko and Hamill forced a couple of acrobatic saves from Michu as NorthEast United struggled to deal with lateral balls into the box.

It proved to be their undoing as Petratos swung a superb cross into the box that Subhasish Bose met with a brilliant header after escaping his marker.

The win lifted ATK Mohun Bagan to second place with 10 points from five games, six behind Hyderabad with a game in hand. NorthEast United, meanwhile, remained bottom, becoming the only team in ISL history to lose six games in a row twice.

ATK Mohun Bagan will play Goa next on Sunday, November 20 while NorthEast United will get a break during the next match week before hosting Mumbai City on Friday, November 25.