ATK Mohun Bagan was seen at their absolute best on Tuesday, where they handed Maziya S&RC a 5-2 win in their last group stage match of the 2022 AFC Cup. A brace from Joni Kauko and strikes from Roy Krishna, Subhasish Bose and Carl McHugh comprised the Mariners’ five goals, while for the Maldivian outfit, Tana scored both goals.

The Green Boys came into this match on the back of an impressive 1-0 triumph over I-League champions. Hence, their head coach Miodrag Jesic quite understandably went for an unchanged starting XI.

On the other hand, the theme was the same in the ATK Mohun Bagan camp as well, The Mariners won their previous encounter against Basundhara Kings by a convincing 4-0 margin, and accordingly, head coach Juan Ferrando played the same team.

It was clear that the Indian Super League team was out for blood, as they started the game in the fifth gear. Krishna let fly a shot as early as the second minute, but Maziya’s Nepali goalkeeper Kiran Chemjong was up to the task.

Jesic’s team had a chance of their own when Tana pulled the trigger from outside the box only four minutes later, but his shot was blocked by a Bagan player. The Maldivian team had an even better chance in the 16th minute when Ibrahim Aisam split open Ferrando’s defense with a through ball, but Hamza Mohamed dragged his shot wide.

The exhibition of missed opportunities continued as Aisam himself went for a shot in the 24th minute and missed the target by a whisker, while Krishna had his shot blocked only a minute later. However, the Mariners did not have to wait long for the first goal as the breakthrough eventually came in the 26th minute. Krishna played provider here to set Kauko free, and the Finnish midfielder found the top corner with a brilliant shot.

He almost added another goal to his tally in the 33rd minute when he got his head to Liston Colaco’s corner, but the attempt was slightly wide of the goal. A minute later, Krishna had another such header opportunity when Prabir Das found him inside the box with a cross, but the Fijian goal-machine had his attempt blocked yet again.

However, for the second time on the night, the incessant pressure did result in a goal as Ferrando’s men created a two-goal cushion for them in the 37th minute. Manvir Singh laid off a headed pass for Kauko inside the box and like the first goal, he found the top corner.

Maziya finally broke free from their shackles after conceding the second goal and played a more attacking brand of football. Aisam and Cornelius Stewart both had shots on goal, but Arsh Anwer Shaikh came to the Mariners’ rescue.

The goal eventually came just before the lemon break, when Stewart found Tana inside the box and the Spanish attacking midfielder did what his teammates could not – find the back of the net.

The break did ATK Mohun Bagan a world of good as they looked completely rejuvenated in the second half and threaded one attack after another. Colaco had a shot in the 50th minute, with Chemjong saving the day for Maziya once again. 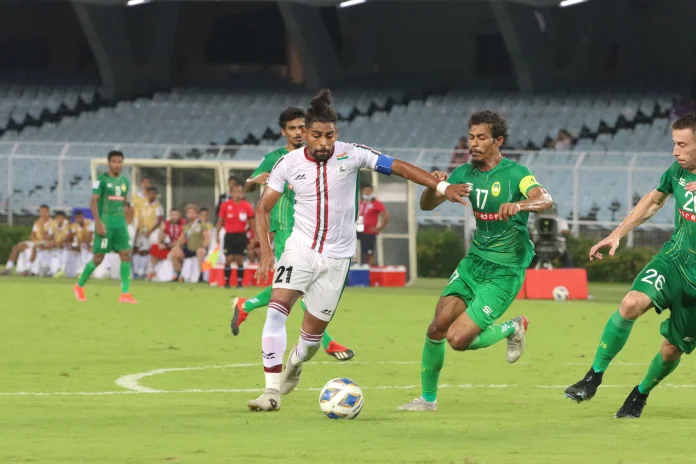 The third goal did arrive six minutes later, thanks to Roy Krishna. A cross from full-back Subhasish found Krishna unmarked, who did well to tuck it home to make the scoreline 3-1. Before Jesic’s men could even respond, they found themselves losing the game 4-1.

Following a set piece situation, Colaco floated a perfectly-weighted cross inside the box, and the provider of the last goal, Subhasish got his name on the scoresheet this time around. The next few minutes saw the Mariners throwing the kitchen sink at the Green Boys as Colaco, Manvir and Kauko all came close to scoring, but neither could find the back of the net.

ATK Mohun Bagan did get their fifth goal though, with Carl McHugh joining the party in the 71st minute with a right-footed shot. The end-to-end action continued as Maziya got back only a couple of minutes later as Tana brought up his brace. Stewart floated a ball into the box and the former Las Palmas player jumped the highest to head it home.

The Mariners did have plenty of opportunities to restore their four-goal advantage, but they couldn’t. Krishna struck the post in the 81st minute, whilst Colaco and Sandesh Jhingan also missed chances. Meanwhile, the last two chances of the match fell to Meziya players Ibrahim Mahudhee and Stewart, but they were not clinical enough to score and find a way back into the match for their team.

With this defeat, the Dhivehi Premier League outfit finished third in the standings with three points to their name. On the other hand, ATK Mohun Bagan finished first and qualified for the inter-zone play-off semi-finals, which will be played in the first week of September.