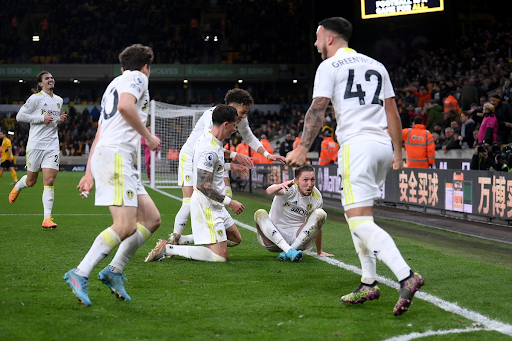 North London giants Arsenal and Tottenham Hotspur boosted their chances of finishing in the top four with victories, whilst Leeds United pulled off an improbable comeback in what a four-match Premier League weekend.

Leeds United’s hopes of survival are looking increasingly realistic, as after beating Norwich City, they registered their second consecutive triumph in the Premier League by handing Wolverhampton Wanderers a 3-2 defeat.

The Peacocks had a horrendous start to the game as Wolves drew first blood through Jonny Otto’s strike in the 26th minute, whereas Francisco Trincao doubled the hosts’ lead just before half-time.

However, the second half was completely dominated by Jesse Marsch’s men. Jack Harrison pulled a goal back for the visitors in the 63rd minute, whereas Rodrigo Moreno restored parity in the match with his 66th-minute goal. Just as when it seemed that the game will end at 2-2, Luke Ayling delivered the killer blow by scoring in the 91st minute.

Arsenal boosted their top-four chances by beating Aston Villa 1-0, only three days after losing out to Liverpool. The Gunners were dominant from the start and it took them 30 minutes to break the deadlock and score their 2000th goal in the Premier League.

English youngster Bukayo Saka’s shot travelled through a sea of maroon shirts before beating Emiliano Martinez in the Aston Villa goal. Steven Gerrard’s team had chances of finding the equalizer and Ollie Watkins came agonizingly close, but his shot struck the crossbar and stayed out.

Following a defeat against Arsenal, Leicester City made a good comeback as they won 2-1 against Brentford. Timothy Castagne opened the scoring for the Foxes in the 20th minute, whereas the hosts’ lead was doubled in the 33rd minute courtesy of a James Maddison strike.

Yoane Wissa pulled a god back for Thomas Frank’s team in the 85th minute but it proved to be nothing more than a consolation, as Brendan Rodgers’ men saw the day out to enter the ‘Top 10’ of the standings, leapfrogging Southampton and Crystal Palace in the process.

Tottenham Hotspur entered the top five after what seemed like ages, as they emerged as 3-1 winners against West Ham United. An own goal by Kurt Zouma gave Spurs the lead in the 9th minute whilst Heung-min Son doubled their advantage only fifteen minutes later.

However, the job was far from being completed as Said Behrahma pulled a goal back for the Hammers in the first half itself. Despite the goal, David Moyes’ team never really looked intimidating and it was Antonio Conte’s Spurs who struck again, as Son scored his second and his team’s third goal in the 88th minute.ƒ