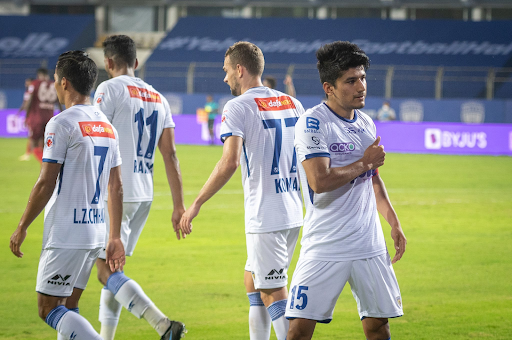 Chennaiyin registered their second consecutive win of the 2021-22 Indian Super League season by defeating NorthEast United 2-1 at the Fatorda Stadium on Monday.

After missing the first two games owing to a mix of stomach upset and hamstring problems, Federico Gallego was finally fit enough to feature in the starting XI for the Highlanders. He replaced Mapuia while Deshorn Brown and Patrick Flottmann made way for Matheus Coureur and Mashoor Shareef.

Meanwhile, Bozidar Bandovic made a single change to the Chennaiyin starting XI, replacing Salam Ranjan Singh with Jerry Lalrinzuala as Narayan Das slotted into the heart of the defense alongside the reliable Slavko Damjanovic.

The Highlanders had an impressive start to the game with their skipper and creator-in-chief Gallego pulling the strings from the wings.

The first big chance of the game came against the run of play in the 14th minute when a darting run from Chhangte helped him reach a ball played out from the deep but the winger decided to pull the trigger himself despite having options available for a pass but forcing Subhasish Roy Chowdhury into an east save.

Three minutes later, it was NorthEast’s turn to open up Chennaiyin’s defense courtesy of a sublime through ball from Gallego feeding Martinique forward Coureur who did well to get past Damjanovic but his heavy touch allowed Vishal Kaith to gather the ball.

Unfortunately for the Highlanders and also for Indian football, it was the Uruguayan’s last notable contribution on the evening as he suffered a painful knee injury in the 23rd minute. Suhair could have provided Khalid Jamil’s team with the lead in the 37th minute when a long throw by Shareef found him unmarked, but his header was saved by Kaith.

Hardly 15 seconds later, Chhangte found himself in space down the right flank again but his left-footed effort missed the target. Repeated mistakes from the unsettled Highlanders’ backline were finally punished as but Chhangte’s surprise shot hit the underside of the crossbar and beat Roy Chowdhury to go over the line in the 41st minute.

At the 45-minute mark, a howler from the Chennaiyin goalkeeper gifted NorthEast United a golden chance on goal but the men in red jerseys failed to equalize the scoreline. 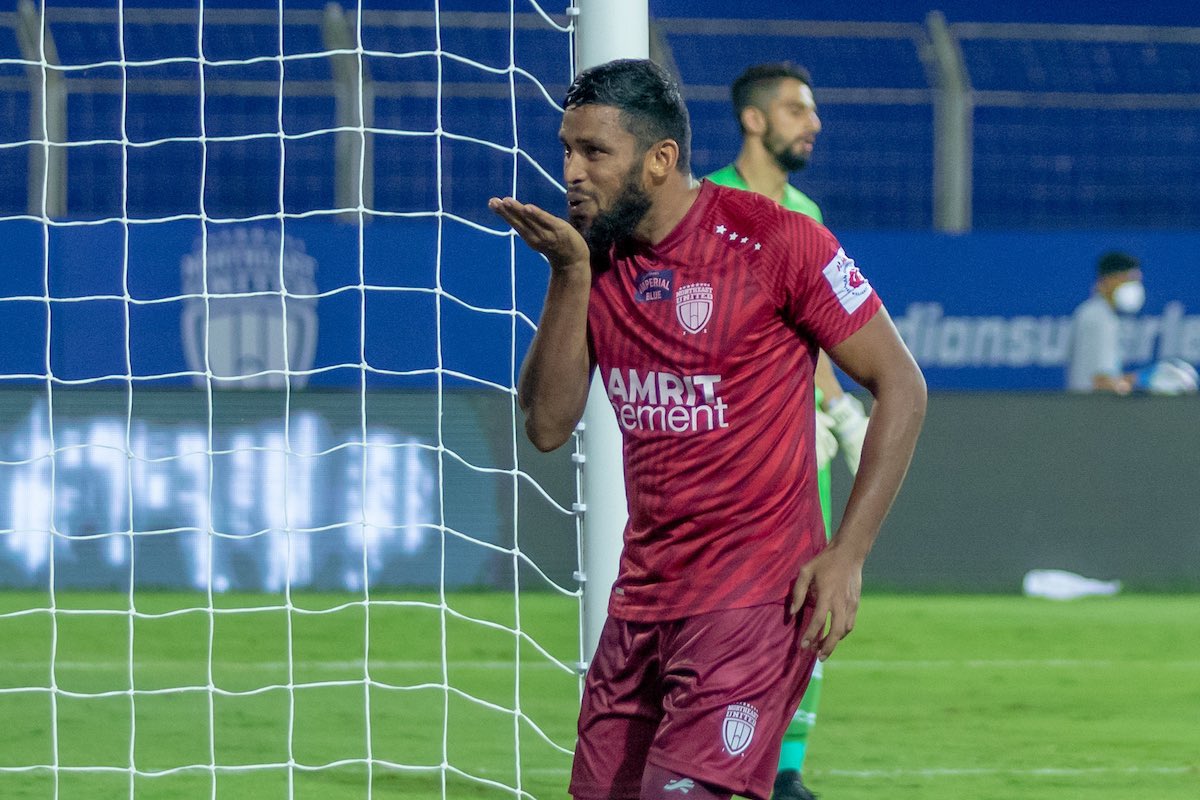 The two contrasting emotions after a goal: Elation and Despair

Jamil introduced Mapuia and Mavnvir Singh (Jr) in the second half and his team responded almost instantaneously. In the 50th minute, another long throw by Shareef led to a chaotic situation in the Marina Machans’ box as Kaith came in to punch the ball clear but it turned out to be another mistake from him. The Chennaiyin custodian was left punching the air whilst Suhair headed the ball in the back of the net scoring his first goal of the ongoing ISL season.

The Highlanders could have sprung into the lead just three minutes later when a Gurjinder Kumar shot was deflected onto the bar. Another chance to take the lead went begging as a beautiful shot from Hernan Santana was saved by Kaith in goal.

A string of missed opportunities eventually came to haunt Jamil’s boys in the 74th minute when the Chennaiyin skipper Thapa took responsibilities on his shoulders and drilled in a powerful shot to make it 2-1 in favor of the Marina Machans.

Jamil tried his bit by introducing Rochharzela and Sehnaj Singh as his final throw of the dice, but the Highlanders failed to make clear-cut openings ever after Thapa’s winning goal.

This is the first instance since the 2015 ISL season where NorthEast United has failed to win any of their first three matches of an ISL season. Jamil would be feeling the pressure now but a match against 11th-ranked Goa on Saturday would help the Indian head coach in reversing his fortunes. Bandovic’s high-flying men will compete against Manolo Diaz’s East Bengal on Friday.