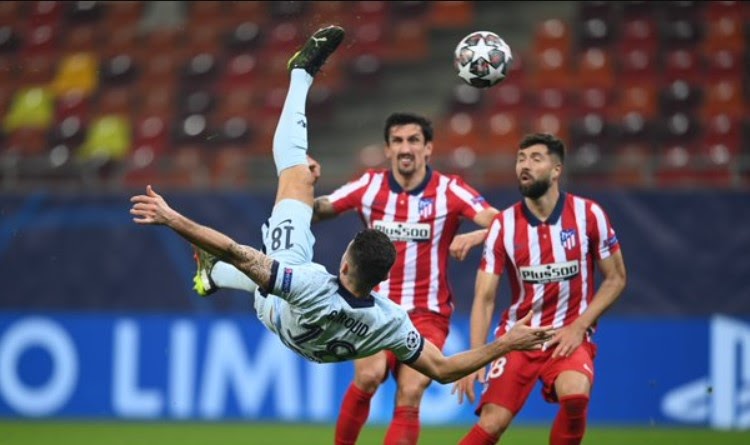 The first leg of the encounter was held at National Stadium in Bucharest. Londoners managed to get a minimal victory in a tough match against the solid team of Diego Simeone. The second leg is due to be at Stamford Bridge.

The first half was fairly neutral, with Chelsea possessing the ball most of the time without much threat for a Jan Oblak`s goal.

You can read the first half details here 👉: Chelsea made 2 shots on target, Atletico сreated 0 to convert.

The Spanish team seemed to have a plan, but, as it turned out, they had no trick to use as they failed to make a single dangerous shot on goal in 90 minutes of the match.

Tuchel’s lads, on the other hand, managed to come up with a classy moment.

The Blues played out the combination and after a final pass, the ball spiraled into the air and 34-year-old Olivier Giroud crashed an absolutely beautiful overhead kick past Jan Oblak.

“It’s an incredible finish from Giroud. It’s not the most powerful of overhead kicks – it actually kicks off the turf as it goes in but he manages to claw it round with his big toe almost! It’s a perfect finish.”

The goal was at first disallowed, but VAR officials decided that Atletico player got the last touch before it reached Olivier Giroud.

Match ended with a score of 0-1, Atletico Madrid will fly to London on March 7 and try to save their Eurocup campaign in the return leg.

Chelsea striker Olivier Giroud was happy after the game:

“We came here with strong intentions to win the game, play our game and we know how we could give them trouble offensively. We have been strong at the back in the defensive shape and very pleased with the win, it was a deserved win tonight.”