What unfolded in the group stage action?

Korean teams dominated the group stage and claimed a 21-6 record, which is the best result for a major region at this year’s event. However, each of the Korean squads lost once, at least, wherein DRX and DWG KIA recorded two defeats. DRX lost to Rogue and Top Esports, while DWG KIA was defeated twice by JD Gaming.

China’s record was worse than Korea’s since they finished with 18 wins and eight losses. While all the LCK representatives made it to the knockout stage, LPL’s TES finished third in Group C of Worlds 2022, losing their spot to Europe’s Rogue.

On the other hand, the teams across the Pacific, and the North American sides accumulated the worst record in the competition with a 3-15 record. None of their wins was against Chinese or Korean teams. Cloud9 beat Fnatic, Evil Geniuses defeated G2 Esports, and 100 Thieves claimed victory over CTBC Flying Oyster.

European teams performed slightly better than North America in the group stage. Overall, the region went 7-12, with Rogue claiming four of those victories (two of them against DRX and TES). Fnatic is the second LEC team to defeat an LCK or LPL side after beating T1. But G2 claimed only one win over EG. 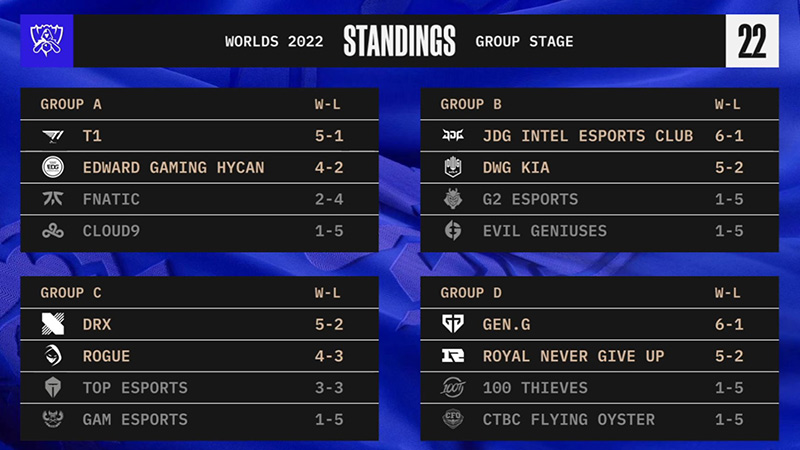 Here is how the teams stood at the end of the Group Stage of the League of Legends World Championship 2022:

What is the Knockout Stage?

The League of Legends knockout stage is the continuation of the main event of the World Championship. After eliminating half of the teams from the group stage, the remaining eight teams are placed into two brackets.

The brackets are single elimination, meaning each team must win or they will be eliminated from the tournament. Contrary to the group stage’s best-of-one format, the knockout stage consists entirely of best-of-five matchups. This means that a team must beat their opponent three times in order to progress to the next round of the knockout stage.

When and where will the Worlds 2022 Knockout Stage happen?

As the World Championship 2022 will be held in North America this year, the knockout stage will take place in various locations across the United States. While the semifinals were meant to take place in Scotiabank Arena in Toronto, Canada, COVID-19-induced visa issues prevented that from happening.

The quarter-finals will take place in the same location as the group stage: Hulu Theatre at Madison Square Garden New York, NY.