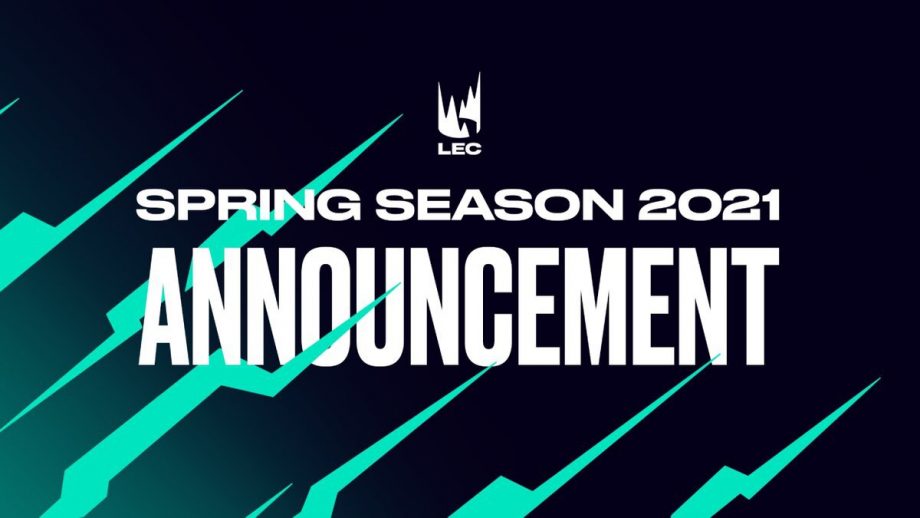 Ages seem to have passed since the World Championships of League of Legends was concluded last October. The exhilarating season was brought to an end after a climactic final. Since then, there hasn’t been much LoL action for players and fans alike. The next LoL Worlds will be held in Shanghai, but that too seems like a million miles away right now. But the wait is finally over, as the start of the LEC Spring Split next year has been confirmed.

The announcement came from Riot Gaming themselves. The famed competition will officially start from January 22, 2021. According to Maximillian ‘MAXtheX’ Schmidt, the commissioner of LEC, the opening week of the tournament will most likely produce a flurry of exciting Superweek action. Those who are unaware of what a Superweek is, it is an extended three-day-long weekend that sees participating teams fight it out thrice over the weekend instead of twice, which they do on normal weekends. As far as the teams are concerned, interested fans or viewers can tune in anytime to check out all the updated and upgraded LEC rosters for the 2021 tournament.

“Pretty easy answer actually: One of the main reasons that all the top four regions (LEC, LPL, LCK, and LCS) have different formats from each other is that they all try to cater to their respective audiences and respective circumstances.”

He frequently and clearly pointed out that the existing format of the LEC is good enough and it was well-received last year too. So, the change is not necessary yet. Just as they say — ‘If it ain’t broke, don’t fix it’.

It was also confirmed in the FAQ session that fans or spectators will still not be allowed to return to the arena to witness the LEC action unfold before their own eyes, with COVID-19 regaining its strength. The players, too, will have to abide by the safety precautions. The players or rosters will participate online from their respective team facilities.

Meanwhile, Fnatic have started the countdown to the tournament. They clearly are raring to go.

G2, on the other hand, have also made their intentions quite clear.

LEC looks different and fresh, with plenty of roster changes happening in the off season. Some rosters were weakened by these changes, while others have begun to look more menacing. But one thing is for sure that all of the participating teams will be hungry as ever and will also try their best to prove their worth.

There’s no doubt that the LEC Spring Split 2021 will be an absolute belter of a tournament and the patient LoL fans will finally be able to enjoy some exciting and intriguing action.