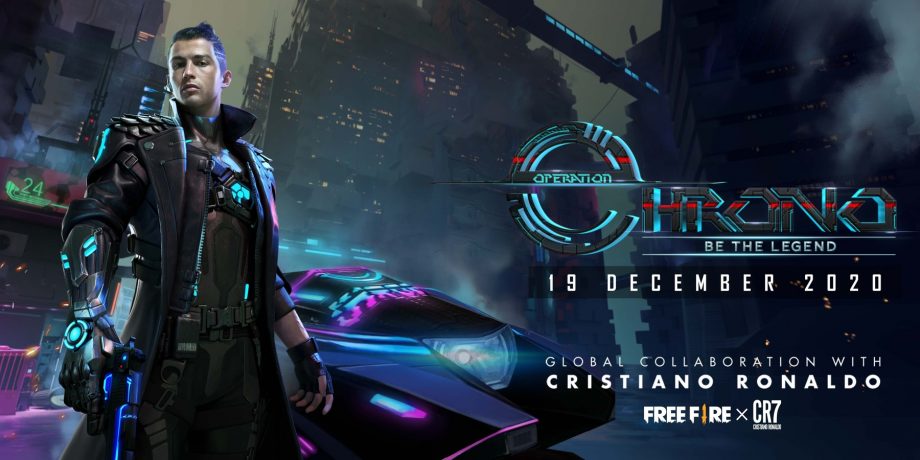 Garena Free Fire has pulled off the seemingly unbelievable, as it has, today, announced a lucrative global collaboration with 5-time Ballon d’Or-winning football superstar Cristiano Ronaldo. The Juventus player will have a whole new playable character in the game based on him, aptly named “Chrono”. Fans won’t have to wait too long either, as the Chrono update of Free Fire is due to be released on as early as December 19.

Free Fire’s rise as a mobile game in the last couple of years has been truly monumental. The uprise of this acclaimed title from Garena hasn’t shown any signs of slowing down either. Free Fire has also recently collaborated with famed Indian celebrities such as — Bollywood superstar Hrithik Roshan and the infamous DJ KSHMR.  They were introduced into the game as independent characters titled “Jai” and “K”, respectively. But this partnership with CR7 will take the popular battle royale title to extraordinary heights, only based on the Portuguese’s huge global fan following.

“Operation Chrono will take place in a futuristic slum universe, a dystopian world featuring the most advanced technology there is. Amidst the chaos, there is room for a hero to emerge and be a source of inspiration for everyone.”

The rumors have been circulating about this deal for quite a while now, but gained in strength significantly from the start of this month, with both the player and Garena choosing to remain silent about it. But today’s eventual announcement has churned in a tremendous response from gaming enthusiasts and sports fans, in general, from all over the world.

Cristiano, the former Manchester United and Real Madrid forward, will also become the global brand ambassador of Garena Free Fire. The character Chrono will be solely based on his facial and personal attributes. The character will be the central figure of the latest Operation Chrono event of Free Fire.

CR7, a UEFA Euros champion with Portugal, is overjoyed with the collaboration. He told the media:

“It’s a great feeling having not only a character in Free Fire modeled after me, but also having the whole universe within the game-changing along with it. The Garena team has worked into the game on tons of new features and elements for Operation Chrono. I hope Free Fire players all over the world are just as excited as I am!”

The deal between the two parties is being hailed as one of the biggest and most ambitious partnerships in the history of eSports. It also marks a definitive shift in the gaming market, as mobile gaming is growing way faster than it primarily promised. In 2020 only, even with the pandemic looming large on its shoulders, mobile gaming has prospered significantly, with Epic teaming up with the likes of eccentric rapper Travis Scott for a mindblowing virtual concert being only one of the many high-budget gaming events of the year. The marketing strategies seem to be spot on. The whole global eSports fraternity is to benefit highly from this.

Harold Teo, the Producer of Garena Free Fire, also opened up about his uncontrollable excitement caused by the partnership with arguably the best footballer of the world. He said in the press release:

2020 has proved to be a very fruitful year for Free Fire. It saw a huge rise in terms of the number of players playing it and also the number of viewers watching it. The extraordinary battle royale title also went on to be recognised as the “Esports Mobile Game of the Year” at the Esports Awards 2020held last month. Garena Free Fire locked horns with much older gaming entities such as Mobile Legends and PlayerUnknown’s Battlegrounds Mobile (PUBG Mobile) etc. With deals of this magnitude, Free Fire looks to be a force to be reckoned with, moving forward, for all the other mobile battle royale games in the global market.

It will be very engaging to witness how well the Chrono character will be received by the humongous fan base of CR7, as well as the ever-growing player base of Garena Free Fire. With more global celebrities coming into the fore pretty much every day, one thing is for sure — the continuous rise of eSports is not going to slow down anytime soon.