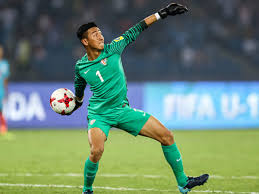 AIFF Elite Academy graduate Dheeraj Singh made himself a household name in 2017, with his scintillating performances in the FIFA U-17 World Cup. He was soon offered a contract by Kerala Blasters, a club for which he has made the most number of appearances till date. After trails in Scotland with Motherwell FC, the lad from Manipur now plies his trade for ATK Mohun Bagan.