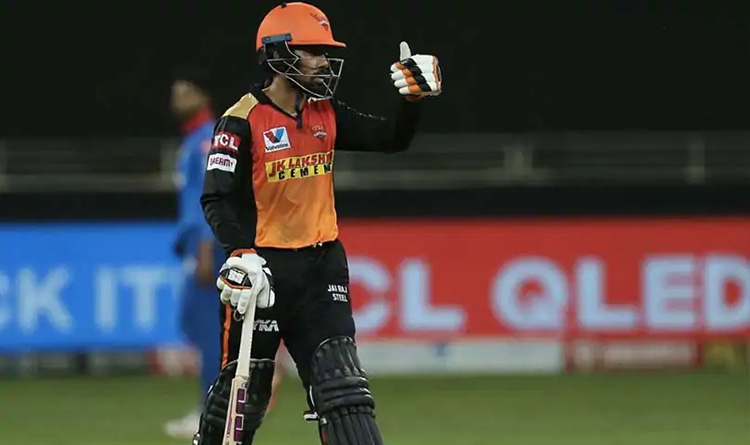 On Tuesday, in Match 47 of the Dream11 Indian Premier League (IPL) 2020, DC faced a brutal defeat chasing the 220 runs target. SunRisers Hyderabad restricted them on 131, registering a win by 88 runs.

SRH climbed to the sixth, and DC fell to the third spot on the IPL points table.

DC captain Shreyas Iyer won the toss and elected to field. David Warner and Wriddhiman Saha came to open for SRH. The openers gave a promising start to the team, with both slamming delivers for back-to-back boundaries. David Warner completed his fifty off 25 balls, and the partnership touched the three-digit mark by the ninth over.

R Ashwin broke the partnership, making the first breakthrough and dismissing Warner for 66 runs. Manish Pandey came on the crease, and Saha moved up to complete his fifty off 27 balls. Saha slammed some amazing shots but got out for 87, dropping a simple catch in the hands of Iyer. Kane Williamson came along and added the final scores, including some interesting shots from Pandey. After 20 overs, SRH was at 219/2, a strong target for DC.

Shikhar Dhawan and Ajinkya Rahane came out to start the run chase. DC suffered an early loss, losing Shikhar Dhawan for a duck in the first over. Marcus Stoinis came next, but Shahbaz Nadeem sent him back with just five runs. Shimron Hetmyer played some good strokes before getting dismissed by Rashid Khan. In the same over, Rashid dismissed Ajinkya Rahane for 36 runs.

DC was past 70 when they saw Shreyas Iyer going back for seven runs. Rashid Khan doing the magic again, knocked out Axar Patel for one run. R Ashwin and the remaining batsmen struggled but couldn’t do much in the last overs, and SRH knocked them all out on 131 runs. SRH registered a win my a big difference of 88 runs.

Rashid Khan, with his three wickets, helped SRH limiting DC to 131 and moving up on the points table.