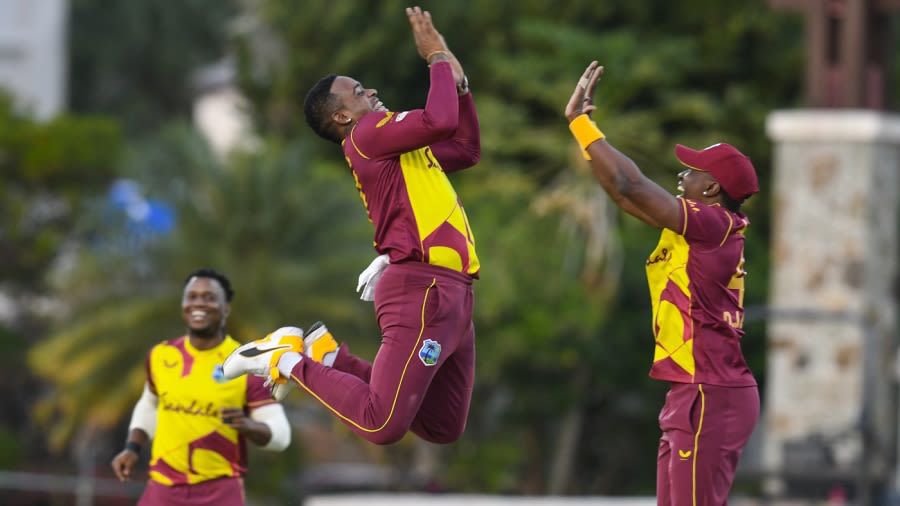 West Indies defeated Sri Lanka in the third and final cricket T20 international by 3 wickets with an over to spare at Coolidge to clinch the three-match series 2-1 on Monday. While the Caribbean team had won the first T20 international in style by 4 wickets, the touring Sri Lanka side was able to level the series with a 43-run victory in the second match.

West Indies did well to restrict Sri Lanka to a total of 131/4 and in reply, despite losing plenty of wickets, they were able to get past the finish line with 3 wickets and 6 balls to spare. Sri Lanka were bolstered by a fine unbeaten 54 from Dinesh Chandimal whereas Ashen Bandara scored 44 not out to help Sri Lanka post what was a moderate total on a fine batting wicket.

In their reply, West Indies had plenty of their batsmen getting starts but none could bat for long. Openers Lendl Simmons and Evin Lewis scored 26 and 21 respectively whereas Chris Gayle, batting at number three, fell for a 20-ball 13. Kieron Pollard, who had smacked 6 sixes in the first T20 international to create a world record, was dismissed for a three-ball duck whereas the others in Nicolas Pooran (23), Rovman Powell (7) and Dwayne Bravo (0) could not trouble the scorers.

Lakshan Sandakan led the fightback for Sri Lanka with 3/29 from his four overs whereas Dushmantha Chameera and Wanindu Hasaranga claimed 2 wickets each from their 4 overs. Fabian Allen was adjudged the man of the match for his quickfire 21 which came from only 6 balls with the help of 3 sixes whereas earlier, he had returned with figures of 4-0-13-1 in a splendid spell of bowling.