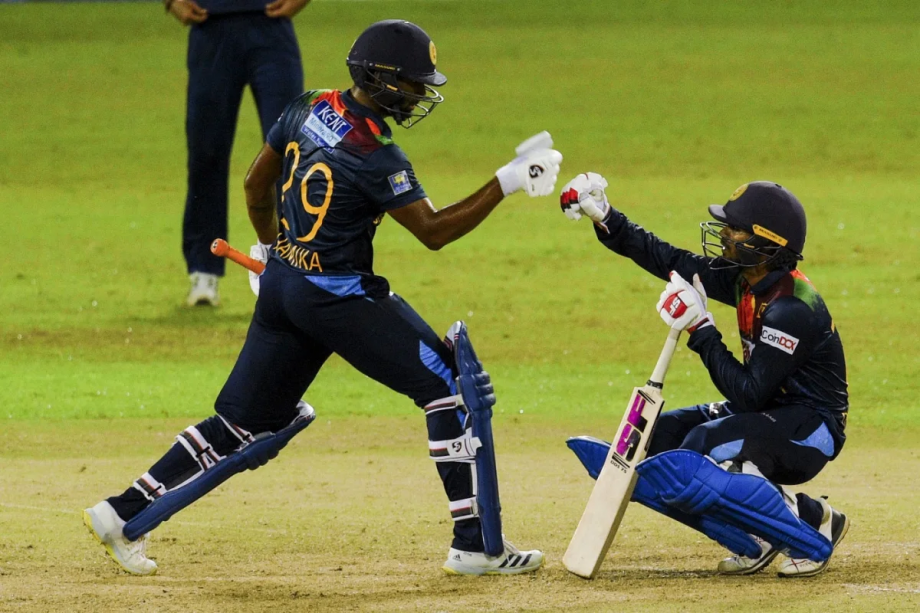 Sri Lanka players celebrate their win in the second T20I

In a low-scoring contest played at the R Premadasa Stadium on Wednesday night, Sri Lanka managed to level the three-match T20I series against India 1-1 with a narrow four-wicket win in the second match of the series. India had earlier won the opening match of the series in a commanding manner by a margin of 38 runs.

Sri Lanka spinners did a fantastic job on Wednesday night to first restrict the touring Indian side, hit hard by the coronavirus, to a poor score of 132/5. But in their reply, there was too much nervousness in the home team’s chase as they won by four wickets   left in hand and only two balls to spare, putting up a total of 133/6.

Sri Lanka used as many as eight different bowling options to keep a young and inexperienced Indian cricket team under leash, which was forced to field as many as four debutants and a plenty of changes owing to the fact that they lost eight of their frontline players to the pandemic related rules.

With Krunal Pandya testing positive on Tuesday morning and eight of his contacts forced into isolation, it was left to be seen who were these people in the Indian camp. And much to the horror of the visiting side which is anyway a second-string team from India, the likes of Hardik Pandya, Deepak Chahar, Prithvi Shaw, Suryakumar Yadav, Krishnappa Gowtham, Yuzvendra Chahal and Ishan Kishan were deemed to be out of the series.

With so many of their key players out, India were forced to play a very short batting line-up which consisted of debutants Devdutt Padikkal (29) and Ruturaj Gaikwad (21). Both the young batsmen did well in their parts, but India were poor in general with the bat, particularly Sanju Samson who was dismissed in an embarrassing manner.

Shikhar Dhawan made the highest individual total for India, scoring 40 but the others were just too ordinary in the contest wherein India wanted to seal the fate of the three-match series.

Sri Lanka were served well by their vice-captain Dhananjaya de Sila who held his nerves to make an unbeaten 40 from 34 balls with 1 six and 1 four, while opening batsman Minod Bhanuka scored a crucial 36-run innings which came from 34 balls and with the help of four boundaries.

Despite an ordinary total on the board, India were impressive as they took the game into the final over and never gave the home team a clear advantage. Kuldeep Yadav was the most successful Indian bowler as he took two wickets for 30 runs.

The series will now be decided on Thursday when the two teams meet once again at the same venue for the third and final T20I, which will serve as the series decider.