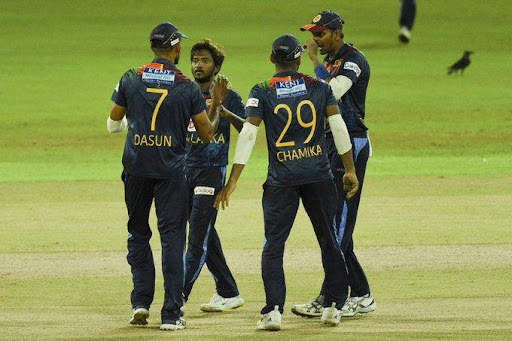 Sri Lanka has announced its squad for the upcoming T20 World Cup in UAE. Dasun Shanaka to retain the captaincy, and Dhananjaya se Silva to play as vice-captain.

The T20 World Cup is all set to be geared up from October 17 in UAE and all the teams are announcing their squads one after the other.

Following the race, Sri Lanka has also announced their squad member for the T20 World Cup and surprisingly Akila Dananjaya has been moved to traveling reserves.

The 15-man squad announced by Sri Lanka has listed Dasun Shanaka as a skipper of the side and Dhananjaya De Silva as his deputy.

Kusal Perera, Maheesh Theekshana, a 21-year-old off-spinner, is one of the interesting choices in the squad. The youngster has attracted the selectors by his excellent bowling spells in the series against South Africa.

Sri Lanka is currently playing a white-ball series against South Africa and a lot will depend on the player’s performance in the ongoing series.

The main players to watch for Sri Lanka in the T20 WC would be the skipper Dasun Shanaka, Wanindu Hasaranga, Dushmantha Chameera, etc. Dinesh Chandimal’s also made a crucial return in the Lanka’s WC squad.

Sri Lanka recently played a white-ball series against India in July and even though they lost the ODI series, the players had shown a great deal of performance in the T20 series.

Hasaranga was named as player of the series and would be the key player for Sri Lanka in the World Cup as the slow wickets in UAE would assist spin.

Another plus point for Sri Lanka is that both Hasaranga and Chameera will also play alongside RCB in the UAE leg of IPL 2021 which will be a great deal for both the players before moving into the mega event.

However, Lahiru Kumara, Pulina Tharanga, Binura Fernando, Akila Dananjaya are the travelling reserves for the tournament.

‘Yet to take a decision regarding Afghanistan’

“We have now finalized the squad, but we are yet to take a decision regarding Afghanistan,”

“We are aware of reports that some (teams) may boycott playing Afghanistan over the Taliban’s position on women, but we are yet to take a decision on that,”

Tim Paine, the Australian Test captain said on Friday that teams could either boycott Afghanistan or pull out the WC following the Taliban’s stance on women’s sport.

Under International Cricket Council (ICC), the nations having a Test team must have an active women’s team.

Australia on Wednesday announced that they could cancel the maiden Test against Afghanistan at Hobart unless the Taliban take their decision back.

However, the Taliban administration in Kabul has made it clear that they would allow their Men’s National Team to go along with their matches but women would not be allowed to participate in sports.