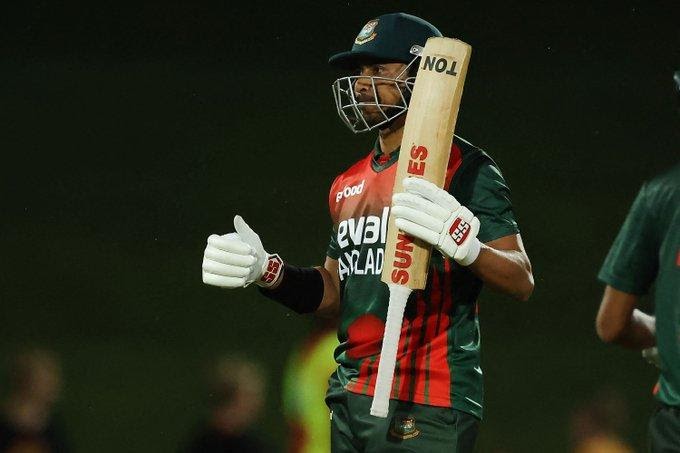 Soumya Sarkar starred with both bat and ball and the youngster Shamim Hossain chipped in some useful runs to get Bangladesh across the line in a close contest against Zimbabwe to clinch the series title.

Zimbabwe had won the toss and decided to bat first. Zimbabwe opener Tadiwanashe Marumani  and Madhevere Wesley started the inning with the boundaries. Both players were in good touch and playing a couple of fine shots.

They were continuously putting the boundaries at regular intervals. In the 4th over of the innings, Madhevere hit Taskin Ahmed with five boundaries in the first five deliveries of his over.

Both openers were on fire and no one could stop them from hitting boundaries but in the last ball of the powerplay, Marumani lost his wicket and failed to go on with the job as he was bowled by Mohammad Saifuddin.

Then Regis Chakabva came one down and tried to up the ante as he wanted to set a big total. He played a couple of fine shots but could not build his innings as Soumya Sarkar came to deliver his second over and took his wicket to send him back to the pavilion.

Next, Zimbabwe skipper, Sikandar Raza came to bat but lost his wicket in the same over of Soumya.

But Madhevere was still on the crease and he completed his half-century with a boundary. But just like others he also could not manage to stay long as Shakib al Hasan took his wicket.

Then Dion Myers and Ryan Burl build a good partnership to score some useful runs but Myers too lost a wicket at the start of the 19th over.

Then Saifuddin came to bowl the last over of the innings and paid the cost by giving 16 runs.

Bangladesh didn’t start the innings very well and lost the first wicket in the 3rd over of the match.

After the first wicket, Shakib the most experienced player of Bangladesh came to bat and started the innings with the boundary but it was the only shot that he played as he got dismissed on the very first over of the Jongwe.

Then Mahmudullah and Soumya enjoyed each other company with good understanding and put on a great partnership (63).

Then Afif Hossain came to bat and greeted the bowler with a six but he lost his wicket in quick succession. Now all hopes were on Mahmudullah and he had done the responsibility very well with the Shamim.

Just 5 runs were needed off the final over and Shamim Hossain hit the four on the first ball and then took the single on the next ball and Bangladesh wrapped up the innings by 5 wickets.

Bangladesh beat Zimbabwe by 5 wickets. Mahmudullah collects the trophy and hands it over to the youngsters.

“I didn’t try to push anything (push the scoring rate) when they were bowling with the new ball because the bounce was not even: some were keeping low while other (deliveries) were carrying (through) at a good height,”

said Sarkar in the presser after the game.

“So I was waiting for one big over because I knew when we can have one big over, the momentum will come on our side. I was only trying to hit one boundary in every over.”