Rahkeem Cornwall takes a fifer to get West Indies on top of the game at stumps, day 3 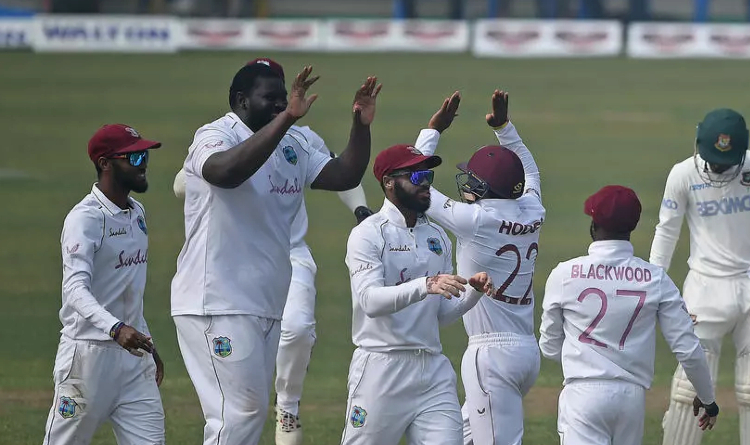 Bangladesh showed some resistance till the end of session 2 before Rahkeem Cornwall picked up a fifer to end Bangladesh innings on 296, Shannon Gabriel picked up three wickets. West Indies on 41/3, lead by 154 runs.

Rahkeem Cornwall and Shannon Gabriel struck on day 3 to get hold of the match while picking up fifer and three wickets respectively. Alzarri Joseph put on a brilliant batting show on day 2 of the second Test in Dhaka on Friday.

West Indies reduced Bangladesh to 105/4 after imposing a humongous 409 in the first innings on the back of some amazing knocks by Joshua Da Silva (92), Nkrumah Bonner (90) and Joseph (82).

Mushfiqur Rahim was batting on 27 alongside Mohammad Mithun at the close, helping Bangladesh prevent further damage after their early embarrassment.

Earlier today, Bangladesh collapsed on 281/6 to 296 all out and West Indies took a useful lead of 113 runs to their second innings. Rahkeem Cornwall was the bowling star of the day as he took his second five-wicket haul in Test career. He dismissed Liton Das for 71 in the 92nd over to pave ways in the Bangladesh lower order.

The post-tea session started with Das and Mehidy Hassan trying to put resistance on their 117 runs stand on the seventh wicket. The stand had seen Bangladesh avoid the follow on after they came on the crease for 115/6, reaching their individual fifties in the second session, both were looking comfortable in front of tired West Indian attack.

But Cornwall stuck right after tea, picking up his fourth wicket of Das after he lost his wicket on the top edge while playing paddle sweep. The ball took an inside, hit the back leg and popped in the air for Blackwood to take an easy catch. After a few balls, Cornwall removed the number 9 Nayeem Hasan to blackwood at slip position.

On the other end, Shannon Gabriel had an intriguing battle going between Mehidy when they had a little chatter before tea. He finally picked him up on 57 after he played a straight to cover for a catch. He picked up another wicket of number 11 batsman, Abu Jayed on the glove for a simple catch at gully.

Cornwall was the star for West Indies as he dismissed Mominul Haque on day 2 before lunch also he got Mohammad Mithun and Mushfiqur Rahim. Rahkeem Cornwall replaced Jomel Warrican and struck immediately when Mithun was on 15 and flicked straight into the hands of Kraigg Brathwaite at short midwicket where he was placed.

That had brought Das and Mehidy, the recognized batsman of Bangladesh who played next 12 overs before lunch with minimal risk. The partnership lasted for 42 overs after Raheem’s dismissal and brought Bangladesh back into the contest to 71 for 4 on day two.

As Mehidy and Das dominated, the morale of visitors went down too. The potential for a bigger partnership was strong but once Das fell, the other followed too, leaving West Indies top order facing 27 overs before the end of the day and trying to build a lead.