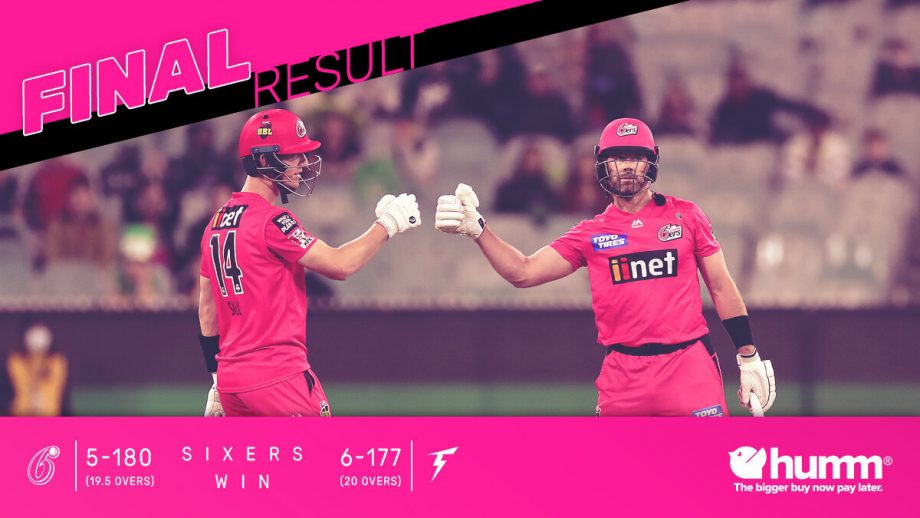 The Melbourne Sixers have failed to solve the final hurdle on the back of a magical inning from Glenn Maxwell to gain points from the toppers of BBL, Sydney Sixers in a thrilling end.

The Stars needed to claim all the four points offered on Tuesday night at MCG to replace Adelaide Strikers and sneak into the fifth place for the final round.

However, the brilliant performance from Glenn Maxwell and at the end power hitting by Hilton Cartwright was not enough after taking Stars to 177-6, and Sixers in response chased it down with 5 wickets and 1 ball to spare.

The Stars prominent gun, Marcus Stoinis fell cheaply on 12 after he clipped the ball at short fine leg at Jackson Bird to give Ben Dwarshuis an opening wicket for the night.

Seb Gotch made only 15 before he top-edged the short ball of Sean Abbott that Steve O’Keefe caught on the third man. Right after that, Nick Larkin was trapped on the front by Dwarshuis on 12.

Glenn Maxwell produced a blaster in the midway, smashed nine fours and a six with a touch of creativity in them that we always expected from him. He eventually chopped his stumps on 66 off 41 and gave Abbott his second wicket of the night.

Nathan Coulter-Nile faced only four balls for his five runs before Cartwright fired three maximums in the last four balls of the innings. His last six went straight into the clouds, talking with birds and the commentators said that it might be the biggest hit ever in BBL.

Fate continued to support Stars side as Josh Philippe (1) and Daniel Hughes (3) got dismissed cheaply within the first eight balls of the innings by Sam Rainbird and Billy Stanlake respectively.

The next wicket did not come quickly as James Vince made a fine shot of 46 off 32 to irritate Stars alongside Moises Henriques who added crucial 38 off 29 before getting dismissed in a run out by Nic Maddinson.

After doing that, Sixers gained the final Bash Boost points to secure top spot in the BBL campaign and ended Stars hopes for the top five.

The match itself went down as it came down to the final over of Stanlake, Sixers needed 10 off the final six balls.

Dan Christian (49 off 23) smacked a sixer on the second ball and the top-edged for a four to witness the winning runs alongside Jordan Silk (35 off 25) with a ball to spare.

Now, Sydney Sixers will play the final with Perth Scorchers along with the hosting right on February 6th.