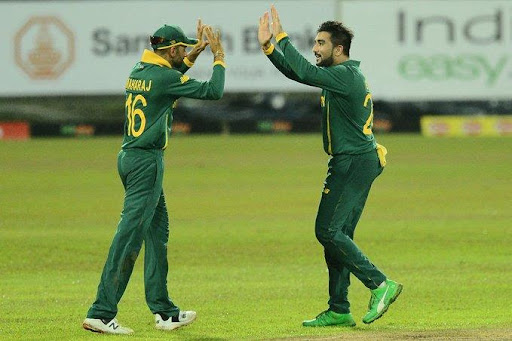 South Africa came back stronger in the second ODI to level the series by 1-1 against Sri Lanka in a rain-affected match at Colombo on Saturday.

South Africa had won the toss and elected to bat first. Rain delayed the start of the second one-day international between Sri Lanka and South Africa in Colombo on Saturday.

After the rain stopped, it was confirmed that the match will be a 47 over per side game.

South Africa’s opener, Malan and Markram played very well. Both pairs were looking in a good form but Karunaratne sent out Markram back to the pavilion, the bat caught an inside edge and the ball goes directly to the wicketkeeper.

Then, Malan and Hendricks started solidly and both batsmen scored their half-centuries. Their partnership was approaching a century when Hendricks played de Silva down the wrong line and was bowled, to force South Africa into another rebuilding phase.

Malan, who was continuously making a problem for Sri Lanka by his batting, scored a century. Due to his outstanding knock, runs keep flowing for South Africa.

Both Klaasen and Malan were dismissed off successive deliveries in the 45th over but the damage was done. South Africa scored 97 runs in the last 10 overs despite losing three wickets for six runs in eight balls.

After a great performance by South African batsmen, the bowling unit also joined the party as Sri Lanka lost three quick wickets but at the start of their innings.

Fernando, Rajapaksa, and Minod were dismissed in the space of five balls, leaving de silva and Asalanka to re-build the innings.

Rain interrupted Sri Lanka’s chase after 25 overs. After a short break, the rain interruption caused the target revised to 265 from 41 overs.

When the match resumed, Sri Lanka’s wickets start felling. Sri Lanka wanted someone to provide them a solid start. Asalanka provided some hope to the team after playing a couple of fine shots.

But all their hopes break down when he also couldn’t play long. Tabraiz Shamsi took four wickets after the break.

South Africa won by 67 runs and level the series 1-1 by this win.

“My job was made easier by the team. We bowled well up first and pushed the Lankans on the back foot. I think the boys put in more energy behind the ball today. We talked about it. You should also play to the conditions. The coaches backed us and it paid dividends. We didn’t have much practice after the last game. We shot ourselves on the foot while chasing in the last game. Tried to work on that,”

“It is always good to come to a place like this and score big. All credit to my partners who kept me going. Didn’t face much spin in the first game but had plenty of learnings from it. The coaches told me to play a little straight. Honor to represent my country and I hope to continue like this,”

“We started well. The partnership between Janneman and Reeza took the game away from us. Death bowling also has been a cause of concern for us. The total was a chaseable one. The rain interruption also cost us a bit. We have to give more chances to fast bowlers. Last few series, the fast bowlers have been outstandingly barring this series,”