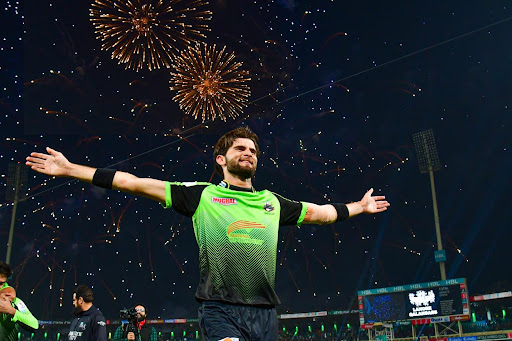 Lahore Qalandars has been crowned as the new PSL Champions as they beat Multan Sultans by 42 runs in the final to seal their maiden Pakistan Super League title in the seventh edition at the iconic and jam-packed Gaddafi Stadium Lahore.

Qalandars restricted Sultans to 138 while defending the target of 181 in 20 overs to claim their maiden PSL title in seven years. As LQ won the seventh edition of PSL, now every team in the PSL has won the title at least once.

Earlier, Lahore Qalandars after opting to bat first required a blistering knock from the tournament’s leading run-getter Fakhar Zaman (3) but he was dismissed by Asif Afridi courtesy of a brilliant catch by Shahnawaz Dahani.

Qalandars lost Zeeshan Ashraf (7) and Abdullah Shafique (14) in the next over. Mohammad Hafeez alongside Harry Brook picked up momentum from the start to keep the scorecard moving for Qalandars.

Qalandars scored nearly reached 100 runs mark in the last eight overs followed by Hafeez’s calculated shots and the thrilling shots from Brook and David Wiese later in the innings. Hafeez completed his maiden half-century of the season in 69 off 46 balls followed by nine fours and a six.

The impressive knock from Qalandars batters finished their side on a competitive total of 180/5.

From the Sultans bowling unit, Asif Afridi impressed with figures of 3 for 19 while David Willey and Shahnawaz Dahani picked up a single wicket each.

While chasing, Sultans’ most reliable duo in Mohammad Rizwan and Shan Masood gave a solid start of 36 runs within four overs until Hafeez clean bowled Rizwan (14) to shift the momentum in favor of Qalandars.

Things turned out better for LQ from there. In the next over, Masood (19) was run out by Fakhar Zaman with a brilliant throw while Amir Azmat (6) tried to take on Hafeez but Fakhar again covered the ground well, claiming a superb running catch.

Sultan promoted Asif Afridi (1) at the upper order to score quick runs but the idea didn’t work as Zaman Khan chopped his stumps in no time.

Rilee Rossouw also couldn’t find the groove with the bat and was caught brilliantly by Abdullah Shafique near the boundary rope after he made 15 off 22 balls.

Tim David (27 off 17) struggled with Khushdil Shah (32 off 23) but things were out of their hands till then and Lahore won the match quite easily with 42 runs after bowling out MS on 138.

PDP (Player Development Board) has helped unearth many young players like Haris and Zaman. It was a difficult responsibility when I was appointed captain. But thanks to my family, Hafeez who supported me throughout and everyone in the team. I want to give credit to everyone on the team as all of them put up their hands and contributed at different times.

Mohammad Rizwan, Multan Captain and the Player of the Tournament:

Lahore, along with us, deserved to win. Others were great in parts but we were consistent and thought it was fair that they won. The difference between the two sides was that they played better in pressure situations. Like Hafeez did after losing early wickets but we couldn’t do that. (On captaincy) I play with everyone and support teammates. We all make mistakes and I look at them as fallible humans and try to be accepting of them which has helped.

Thanks to everyone here and the management, they have backed me and this was the right time to perform. It was important to absorb pressure, the partnership between me and Brook helped. David Wiese finished off really well. Lahore has struggled for 7 years, and the mindset and vision have helped win here. Shaheen is a champion; he can manage everything really well. He respected everyone and gave authority to everyone.