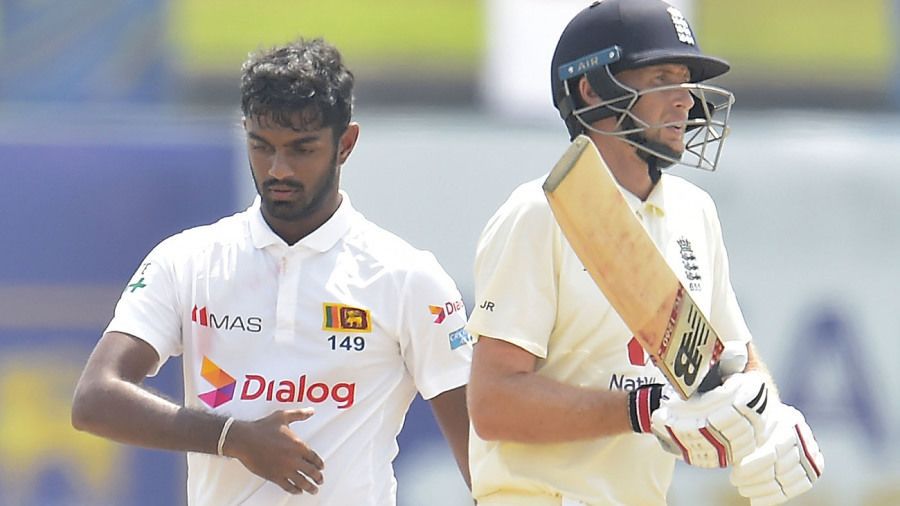 Lasith Embuldeniya claimed 7/132 on the third day of the second Test at Galle, whereas Joe Root kept England in the contest with a masterly 186

A second double century in as many Test matches was on target for England cricket team captain Joe Root, but fate had other plans for the right-handed batsman who was run out for 186 in the dying minutes of the third day’s play in the second Test at Galle against Sri Lanka. Root may have fallen 14 runs short of his second Test ton of the tour, but he ensured that England were not too far behind Sri Lanka as far as notching up a strong reply in the first innings was concerned.

England reached 339/9 in reply to Sri Lanka’s first innings score of 381, trailing by only 42 runs which was a huge achievement given the fact that they looked like giving away more than 100-run lead in the first innings.

England battled all day long with some crucial partnerships on the way that helped them scale the total. After Root and Jonny Bairstow added 111 runs for the second wicket, it was the turn of the England captain partnering with their wicketkeeper-batsman Jos Buttler to keep the scorecard ticking.

Buttler was dismissed for 55 from but he played a fluent knock during his stay at the crease, which was ended by right-arm Sri Lanka spinner Ramesh Mendis. Root found another dependable partner late in the day in spinner Dom Bess as the two added 81 runs for the sixth wicket in 172 balls to take England closer to the Sri Lankan total.

Buttler faced 95 balls and hit 7 fours during his stay at the crease whereas Bess mate 32 from as many balls with four boundaries to his credit.

Bairstow, who resumed on 24 on the third day, could add only four more runs to his total as he fell for 28 off 73 balls with five boundaries to his name. The England No 3 batsman was dismissed by left-arm Sri Lanka spinner Lasith Embuldeniya, who had a splendid day to remember on the field.

Embuldeniya claimed 7/132 in a splendid bowling performance as he kept on chipping away with wickets, not allowing any of the England batsmen to score easily off him.