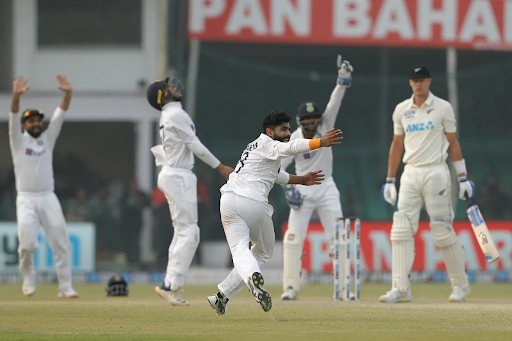 New Zealand fought hard all day long on Monday to force a draw in what turned out to be a thrilling finish to the first Test match against India, played at the Green Park Stadium in Kanpur. India were just one wicket away from victory when bad light forced the umpires to stop the play and award both the teams with equal points in the ICC World Test Championship contest.

It did not look like India would come close to winning the first Test at Kanpur after New Zealand batsmen Tom Latham and nightwatchman Will Somerville made it to the lunch break without being dismissed and adding 75 runs to the team’s total, after they were set a target of 284 runs to win by the Indian team.

India fast bowler Umesh Yadav bounced out Somerville in the second session, who made 36 from 110 balls with five boundaries, to provide his team the first breakthrough of the day, following which it became a tense contest between the Indian spinners and New Zealand batsmen. While Latham got to his half-century from 138 balls, the others disappointed as the visiting side kept on losing wickets at regular intervals.

Somerville was dismissed in the 36th over of the New Zealand innings and Latham in the 55th. The senior New Zealand batsman Ross Taylor was trapped leg-before by Ravindra Jadeja for 2, and from thereon, plenty of New Zealand batsmen tried to provide strong resistance but they could not last long enough.

New Zealand captain Kane Williamson was also dismissed leg-before by Jadeja after making 24 from 112 balls whereas wicket-keeper batsman Tom Blundell made the mistake of playing one on to his own wickets, of Ravichandran Ashwin, to be dismissed for 2 from 38 balls.

Henry Nicholls also had a game to forget after he was trapped leg-before, for which he also wasted a DRS appeal, off Akshar Patel as New Zealand, who never were in contention of chasing down the target, were left reeling.

With plenty still left in the contest, New Zealand were faced with a tough challenge to bat out the remaining time and overs as light began fading. In the final 30 minutes or so, umpire Nitin Menon kept on checking for light after the end of every over and with 12 minutes remaining to the scheduled end of the match, he and the other umpire Virender Sharma decided that it was enough.

New Zealand lost their chunk of batting much ahead of the final overs to be bowled, and the credit for forcing a draw went to Rachin Ravindra and Ajaz Patel, who both batted incredibly well to deny India their last wicket. Ravindra made 18 not out from 91 balls whereas Ajaz Patel faced 23 balls to make 2 runs before the game was called off.

India and New Zealand will now move to Mumbai where they will face off in the second and final Test match of the series at the Wankhede Stadium. The second Test will be played from December 3-7, for which India will have the regular captain Virat Kohli making a comeback.