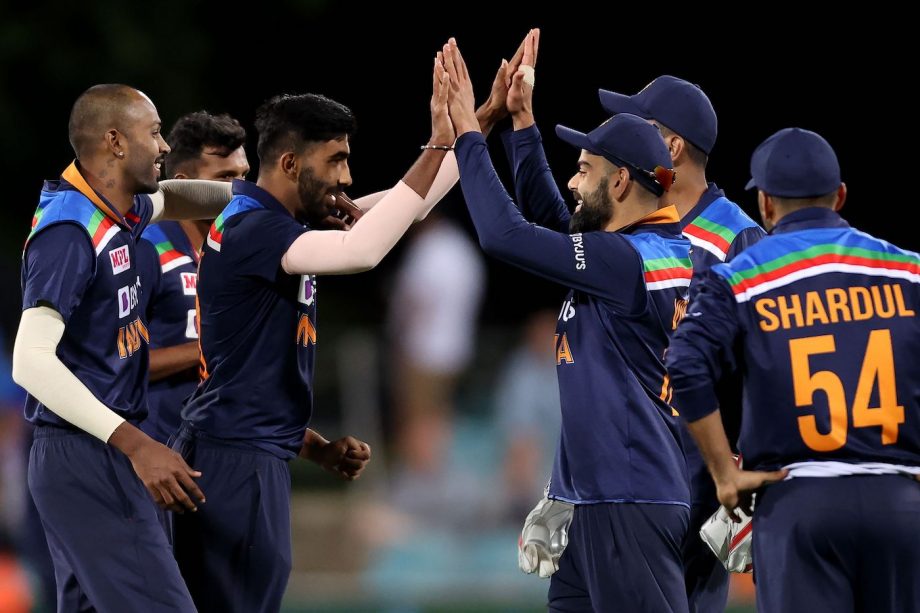 India defeated Australia by 13 runs in the third and final One-Day International (ODI) to record a consolation win as the hosts took the three match series 2-1. In the contest played at the Manuka oval in Canberra.

India set a target of 303 runs for Australia to win and in the reply the host team were bowled out for 289 in 49.3 overs with Shardul Thakur claiming 3 wickets, Jasprit Bumrah taking 2 and India deputed debutant left-arm fast bowler T Natrajan claiming 2 wickets apiece.

India also had key performers with the bat as their captain Virat Kohli scored 63, Hardik Pandya made 92 not out and all-rounder Ravindra Jadeja chipped in with the rapid knock of 66 not out.

India added more than 90 runs in the final 10 overs to finish at a height of 302/5 in their 50 overs which in a way changed the momentum of the contest.

Australia clearly missed the services of their injured opener David Warner as middle-order batsman Marnus Labuschagne was sent out to bat with captain Aaron Finch. For a team which put on two century opening partnerships in the last ODI’s, it was a damp squib when Labuschagne and Finch could only manage 25 for the first wicket.

Labuschagne was dismissed for 7 and so was Australia’s star batsman Steve Smith, who was removed in a rather soft mana when he was caught behind off a ball which was trickling down the leg side. Thakur accounted for Australia’s most important wicket as India strengthened their chances of pulling off a win.

Finch batted well for his 75 which came off 82 balls, studded with 7 fours and 3 sixes. But it was the middle-order which let Australia down as Moises Henriques (22) and debutant Cameron Green (21) could not contribute as heavily as the hosts would have liked.

After a flop show from the middle order Australia had their hopes pinned on wicketkeeper-batsman Alex Carey (38) and all-rounder Glenn Maxwell. The two batsmen added 52 runs before a horrible mixup resulted in Carey being run out, which left Australia in a precarious position. Maxwell did well towards the end to score 59 of only 38 balls with 4 sixes and 3 boundaries but he was the only one left to do the job as the others around him were falling for cheap.

Star India pacer Bumrah brought out one of his best deliveries―the yorker―which ended Maxwell’s resistance and dashed Australia’s hope for a win. Australia were still in a run-a-ball-required situation when Maxwell was dismissed but there was no one else who could take them beyond the finish line.

With a narrow 13-run win, India were able to end their losing streak which had stretched to five matches which included the first ODI of the series which they had lost comprehensively. The Virat Kohli-led team will now focus their attention on a three-match T20 International series which begins on Friday at the Manuka oval in Canberra.

This is, kind of what dreams are made of –
Trending
Login