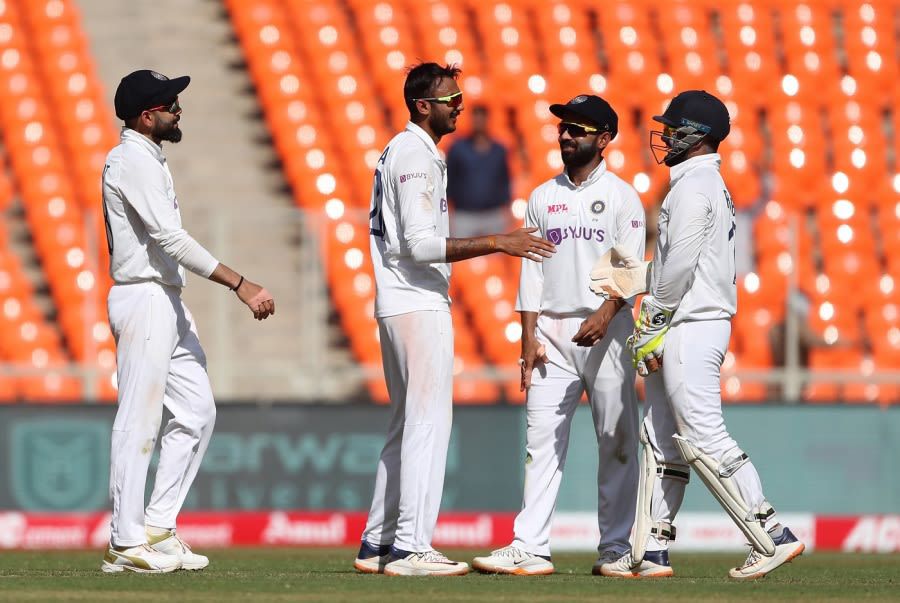 England batsmen came out fighting and posted a score in excess of 200 but were still under pressure against a top-form Indian team on the first day of the fourth and final cricket Test which started on Thursday at Ahmedabad. India were 181 runs behind in the first innings after bowling England out for 205 with Akshar Patel claiming 4 wickets and England vice-captain Ben Stokes notching up a quality half-century.

England had advantage early on when they won the toss and decided to bat. But their openers Dom Sibley and Zak Crawley were dismissed for cheap by Patel, who continued to terrorise the visiting team batsmen albeit on a wicket which was conducive for batting, but one on which England failed to capitalise.

A plenty of England batsmen got starts but they failed to convert them into big knocks with No 3 Jonny Bairstow scoring 28 from 67 balls, Stokes making 55 from 121 balls whereas the likes of Ollie Pope 29 and Dan Lawrence (46) also contributed. England still could not find a way around some disciplined and tight bowling from the Indian bowlers which also included their fast bowlers who asked plenty of questions from the English batsmen.

England captain Joe Root, who had started off the tour with a superb double century, was pinned at the crease in front of the wickets for five by Mohammed Siraj, as the right hand produced a scintillating bowling performance throughout the day on Thursday to keep India on top.

England were bowled out for a mere 205 from 75.5 overs and reply, India were shaking when the loft Shubman Gill in the first over itself for a third-ball duck. The legendary England fast bowler James Anderson did not allow the Indians to score even a single run of his bowling as he sent down five maiden overs on the trot while claiming the wicket of Gill. At stumps, Rohit Sharma was batting on eight accompanied by Cheteshwar Pujara on 50 as India looked set to produce a strong batting display as long as the pitch remains good for batting.