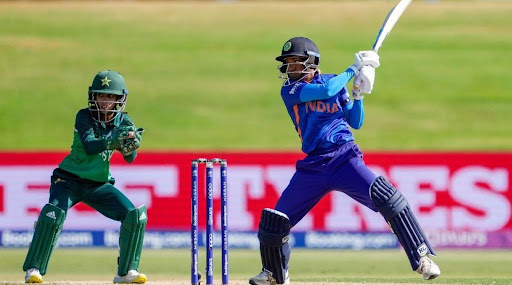 “Indian players and batters have developed and gained confidence because of opportunities to play in the leagues, which is not the case with our players,” Bismah Maroof

Pakistan skipper Bismah Maroof says that Indian batters have gained a lot of benefit from playing overseas leagues regularly, something that her team has been missing out on.

“Indian players and batters have developed and gained confidence because of opportunities to play in the leagues, which is not the case with our players,”

Maroof said after Pakistan’s eight-wicket defeat which has put them on the brink of elimination in the Commonwealth Games.

“Once our players start getting more such opportunities they will develop well and get confident.”

Mandhana, Harmanpreet, Rodrigues, Shafali, and Deepti were also part of the Hundred’s inaugural season last year and Rodrigues is set to continue with Northern Supercharges in the upcoming edition.4

Maroof was part of the FairBreak Invitational Tournament earlier this year along with her teammates Aliya Riaz, Diana Baig, Fatima Sana, and former captain Sana Mir, who took retirement from international cricket.

“We are playing mix-and-match [style of cricket] because that’s the requirement of the team,” Maroof

said about Pakistan’s approach that is less reliant on power-hitting.

“One has to play the anchor and stay in the middle but the power-hitters whom we rely on couldn’t execute things for us. That’s an area to work on.”

Maroof is lying about the hopes of Women’s PSL, something that the PCB chairman Ramiz Raja has proposed to help Pakistan on that front.

“We are expecting [the women’s PSL to be launched] next year, that is the plan. Hopefully, it materializes and helps our bench strength.”

In the Women’s World Cup earlier this year, Maroof’s daughter, Fatima was a darling in the photos and for the players. She was often seen as a bridge as players were taking pictures with her to post on social media.

Ahead of the games, Maroof’s participation was in doubt after her daughter was denied the pass but PCB fought her case and Maroof’s mother also traveled along to take care of Fatima.

“It was important for me to have her around, as I couldn’t have left her back at home,”

Maroof said as she was asked if Fatima is enjoying being in the CWG Village.

“Credit to PCB for fighting out the case and am very thankful to the board for granting me the permission. Whenever Fatima meets players from other teams, she (also) enjoys it very much.

“[It is] tough to manage. But I am keen to play and serving and leading Pakistan is an honor. I focus on getting time out for that and with my mother around, we share the task of taking care of her.”