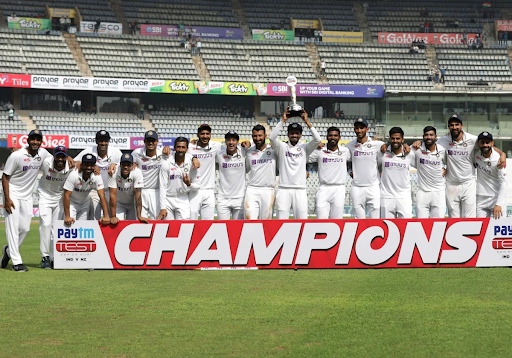 India were back at the top spot in the ICC rankings for teams in Test cricket after they crushed New Zealand by a huge margin of 372 runs on the fourth day of the second and final Test match, played at the Wankhede stadium in Mumbai. Chasing an improbable target of 540 runs to win, New Zealand were bowled out for 167 soon after play resumed on the fourth day.

New Zealand were placed at a dangerous position of 140/5 when play resumed. While they had fought long and hard to earn a draw at the Green Park Stadium in Kanpur in the first Test, the Kiwis could not produce a similar effort in Mumbai when they were bowled out in about 45 minutes in the first session with Jayant Yadav causing the damage. The all-rounder claimed four wickets whereas senior spinner Ravichandran Ashwin claimed one, as both these right-arm spinners ended with four wickets each.

India opener Mayank Agarwal was named the Man of the Match for his splendid batting performances in both the innings, in which he made 150 and 62. It was certainly a tough call to make since New Zealand had their left-arm spinner Ajaz Patel creating history by becoming only the third bowler after Jim Laker and Anil Kumble to have taken 10 wickets in an innings, a record that he achieved in the first innings of the second Test.

For India, Ravichandran Ashwin returned with the figures of 22.3-9-34-4 whereas Jayant Yadav finished with 14-4-49-4. The third spinner in the Indian team, Akshar Patel took 1/42 from his 10 overs whereas fast bowlers Mohammed Siraj and Umesh Yadav remained wicketless.

India were dominant throughout the game after Mayank Agarwal scored a brilliant century on the first day of the match to help his team put on a total of 325 in the first innings despite Ajaz Patel taking all the 10 wickets. The home team claimed complete control of the match on the second day when they bowled out New Zealand for a historic low total of 62, which is the lowest for the Kiwi side against India in their history.

Having conceded a huge lead of 263 runs in the first innings, New Zealand were completely on the back foot and they were not asked to follow-on. India batsmen continued to dominate the New Zealand bowlers as 62 from Mayank Agarwal and useful contributions from Cheteshwar Pujara and Shubman Gill, who both scored 47 each, as well as 36 from Virat Kohli helped India put the pressure on New Zealand.

India all-rounder Akshar Patel was in his elements with the bat as he made 41 not out from only 26 balls with four sixes and three boundaries, to help the home team declare their second innings at 276/7, with an overall lead of 539 runs.

India will now travel to South Africa for three Tests and three ODIs with their series starting on December 26. On the other hand, after a long time away from home, the New Zealand cricket team will return to face Bangladesh in a two-match Test series starting on January 1, 2022.