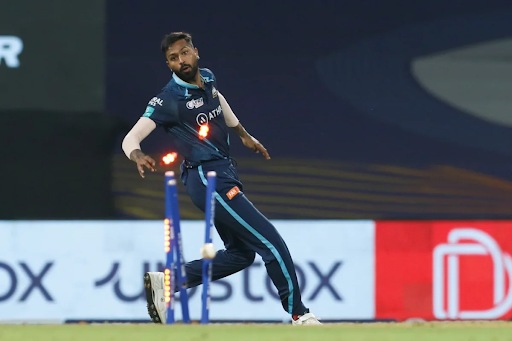 Hardik Pandya was named man of the match against Rajasthan Royals

Gujarat Titans moved to the top spot in the points table for the Indian Premier League (IPL) 2022 competition after they recorded a 37-run impressive victory against Rajasthan Royals at the DY Patil Stadium in Navi Mumbai on Thursday night.

Gujarat Titans captain Hardik Pandya was named the man of the match for his brilliant 87 not out in the first innings, which helped his side set a strong total of 192/4 after they were asked to bat first by Rajasthan Royals captain Sanju Samson.

Early in their innings, Gujarat Titans lost their in-form opening batsman Shubman Gill for 13, wicket-keeper batsman Matthew Wade for 12 while Vijay Shankar was dismissed by Kuldip Sen for 2 as they made a poor start. But Hardik Pandya lead their recovery in the company of Abhinav Manohar as the two batsmen added 86 runs from just 55 balls for the fourth wicket.

Pandya was very impressive with the bat on Thursday night at the DY Patil stadium, hitting eight boundaries and four sixes to score 87 not out from only 52 balls whereas Gujarat Titans were also bolstered by handy knocks from Abhinav Manohar, who scored 43 from 28 balls with four boundaries and two sixes and David Miller, who cracked five boundaries and a 6 to make 31 not out from 14 balls.

In their reply, Rajasthan Royals made a stunning start as their wicket-keeper batsman Jos Buttler went all out against the Gujarat Titans bowlers, smacking eight boundaries and three sixes to score 54 from 24 balls. However, once Butler was dismissed in the sixth over, before which Rajasthan Royals had already lost Devdutt Padikkal and Ravichandran Ashwin, their fight got over as none of the remaining batsmen could make any impact.

Devdutt Padikkal was dismissed for a first-ball duck by left-arm Gujarat Titans bowler Yash Dayal, who also took the wickets of Rassie van der Dussen and Yuzvendra Chahal in the remaining innings to return with 3/40 from his four overs.

Rajasthan Royals once again experimented with their batting line-up, sending Ravichandran Ashwin after the fall of first wicket but the move failed as the spin bowling all-rounder could manage only 8. The Rajasthan Royals side was let down by their middle order, with Sanju Samson scoring 11 and Rassie van der Dussen 6 from 10 balls.

Shimron Hetmyer scored a vital 29 from 17 balls with the help of two boundaries and a six but Rajasthan finished well short of their target mark, scoring 155/9 in their 20 overs.