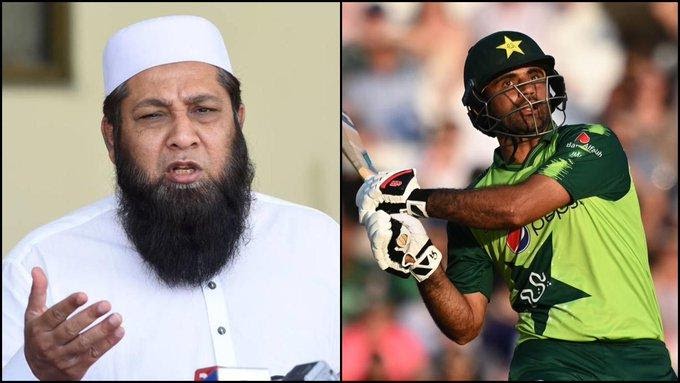 The legendary former Pakistan batsman, Inzamam ul Haq, in a Youtube video on Monday, said that placing Fakhar Zaman at lower order is a waste as he had played as an opener in the past.

Former Pakistan skipper Inzamam-ul-Haq pointed out Fakhar Zaman’s batting position as the reason behind their loss in the match. Fakhar Zaman played as an opener in ODI’s against England but now he has been batting at lower order in the short format against England.

He didn’t perform well in the T20I’s against England after changing his position. Inzamam-ul-Haq also noted that Pakistan should have sent Fakhar Zaman after one down instead of Sohaib Maqsood. His abilities have gone wasted if the team will continuously send him at number five or six

“Talking about the batting, I think Pakistan made a major mistake at number three. When Babar Azam and Mohammad Rizwan were playing well, they sent Sohaib Maqsood instead of Fakhar Zaman when a wicket fell. Fakhar was an opener and if you push him to number five or six, where he has to face spinners, then he will be completely wasted. If they had sent him instead of Sohaib then it would have formed a right-hand and left-hand combination. Fakhar had made an eight-ball 25 in the last match as well. His confidence was high. He would have performed better up the order. We could have put a lot of pressure on England in this way,”

“Pakistan couldn’t perform as they did in the first T20I. They played well; I am not saying that they did not. It was visible that they were fighting. I think that when Shadab Khan was playing, we knew that the score cannot be chased down but they showed fight because they were still trying to score. This is a good sign. The second good thing is that the standard of fielding is progressing well. I was happy to see that,”

“In T20s wickets are very important. One 18 or 20 run-over could have changed the game. One over can change a match. Pakistan’s bowling, if we look at it, is not doing that well. They have given away more than 200 runs so we can’t say that they have been doing well. But talking about batting, we have been losing in T20s because our performances need to be better,” he concluded.