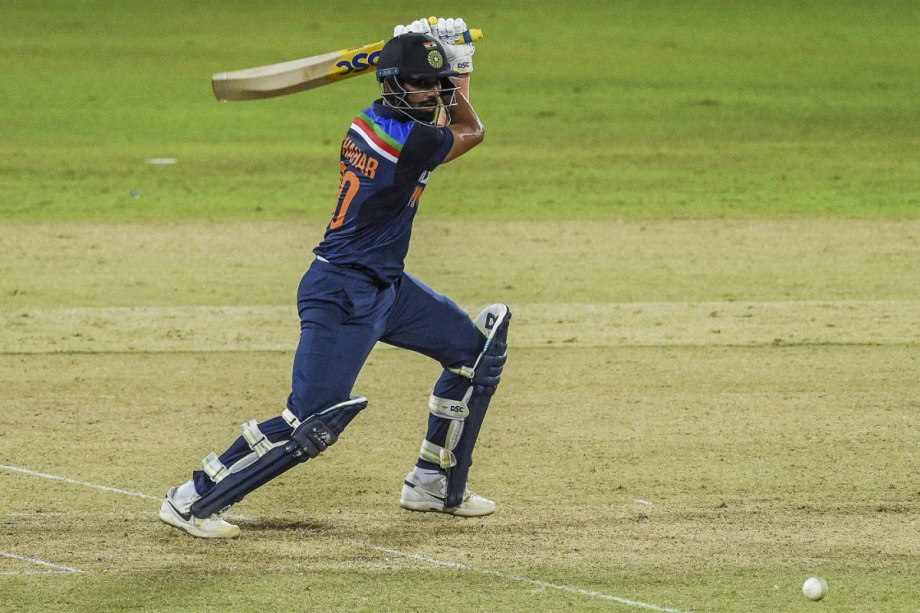 Deepak Chahar scored a superb 69 not out on Tuesday

India powered to a 2-0 unassailable lead against Sri Lanka in the ongoing three-match ODI series following splendid half-centuries from Suryakumar Yadav and Deepak Chahar, in the second ODI played on Tuesday at the R Premadasa Stadium in Colombo. The third and the final ODI of the series will be played at the same venue on Thursday, July 22.

India won the second ODI and clinched the series with three wickets and five balls to spare, staging a stunning comeback after they were reduced to 194/7 chasing 276. The visiting team finished at the score of 277/7 in 49.1 overs, with Chahar making his maiden ODI fifty to remain unbeaten on 69, in the strong company of India veteran Bhuvneshwar Kumar, who made 19.

Chahar and Bhuvneshwar added 84 runs unbeaten for the eighth wicket, consuming as many deliveries as they crushed Sri Lanka’s challenge with the ball, after the home team bowlers had shown a lot of improvement from the first match of the series by taking a string of wickets to make the Indian cricket team work hard for the win.

Earlier in the day, Sri Lanka were indeed impressive with the bat as they scored 275/9 in their 50 overs after winning the toss and electing to bat first. Sri Lanka opening batsman Avishka Fernando made 50 from 71 balls and added 77 runs in 13.2 overs with his opening partner Minod Bhanuka, who scored 36. The two batsmen provided Sri Lanka with a strong platform to build on but once again, the middle order fumbled with Bhanuka Rajapaksa falling for a first-ball duck and Dhananjaya de Silva being dismissed for 32.

It looked like Sri Lanka would once again struggled with the bat but Charith Asalanka provided them strong support in the middle overs, scoring a 68 ball 65 with the help of six boundaries to hold them through. Towards the end, Chamika Karunaratne once again impressed with the bat, smacking five boundaries to make 44 from 52 balls in his unbeaten innings.

For India, Bhubaneswar was the pick among the bowlers with a span of 10-0-54-3 whereas Yuzvendra Chahal also returned with 3/50 from his 10 overs. Deepak Chahar, named man of the match for his all-round show, had earlier taken 2/53 from his eight overs.

India were off to a shaky start when Wanindu Hasaranga accounted for Prithvi Shaw, dismissing the flamboyant Indian opener for just 13 and returned to claim the wicket of Shikhar Dhawan for 29 later on. Ishan Kishan, meanwhile, was cleaned up by Kasun Rajitha for 1 which left India tottering at 65/3 at one stage.

And unfortunately runout for Manish Pandey for 37 meant the rest were responsible for doing the job which did not exactly happen. Hardik Pandya was dismissed for a three-ball duck by Dasun Shanaka and despite Suryakumar Yadav racing to his maiden half-century in his second ODI — and innings of 53 from 44 balls with six countries – India were always behind in the chase.

The visiting team was reduced to 194/7 in the 36th over which was when the pair of Chahar and Bhuvneshwar got together to take India past the finish line. Chahal batted with tremendous control and application to make his maiden half-century in 50-overs cricket, hitting seven fours and one six to score 69 not out from 98 balls as he also went on to hit the winning runs for the visiting side.

India thus extended their domination over Sri Lanka by recording their 10th consecutive ODI victory in the island nation, with the home team now facing tremendous pressure to make a comeback and record a consolatory victory in the final ODI.