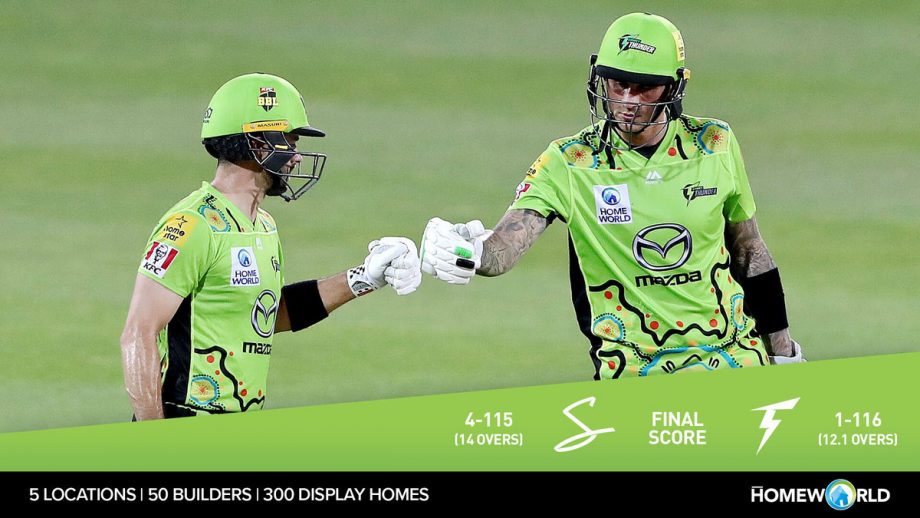 The British power-house, Alex Hales has put Sydney Thunder across the line for finals after a one-sided victory of nine wickets against Adelaide Strikers on Monday at Adelaide.

After a rainy day at Adelaide, the match shortened to 14 overs per side. Thunder won the toss and sent Strikers to bat first which they slumped to 35-3 in 6.3 overs, with Alex Carey and Travis Head coming back to the side.

Jake Weatherald then rescued the time from the critical situation, smashing 80 off just 47 balls; 58 of which came in only 28 balls to take Strikers on 115-4.

But that proved to be an easy task for BBL’s leading run-scorer, Alex Hales who chased the task with power-hitting alongside Callum Ferguson’s striking to reserve for the finals.

Alex Hales not only manifested a one-man show but he also broke the record for most sixes in a single season of BBL ever.

He finished the match with an unbeaten 63 off 39 along with the master blaster Callum Ferguson who ended up unbeaten on 46 off 33 after a shocking loss of Usman Khawaja.

Usman Khawaja was done by the finest ball of the tournament. In fact, the finest ball is ever seen in a BBL tournament. Dan Worrall was given the ball in the first over and he attacked with a breathtaking, inswinger that Khawaja could not handle and he was stunned after getting bowled for a golden duck.

The Strikers hoped that the dismissal would set the tone but as Brad Haddin said that Strikers missed a trick after not handing the ball to Dan Worrall for a second over until later in the match.

As he was given rest for later use until then Hales took a grip of the match, hitting four sixes to record the highest maximums of 30 in BBL, surpassing the previous record of Marcus Stoinis.

The Thunder marched easily before Ferguson scored the winning runs in 13th over to take his side across the danger zone.

Jonathan Wells provided some resistance along with Weatherald, to score 21 off 18 after Ryan Gibson finished the innings on unbeaten three.

Sydney did not have multiple wicket-takers and the dismissals were shared between  Brendan Doggett (1-19), Nathan McAndrew (1-8), Tanveer Sangha (1-20) and Chris Green (1-19).

Sydney Thunder has now confirmed their spot in the final while Adelaide Strikers will wait for the result of Tuesday’s triple-header to get the assurance of their position.