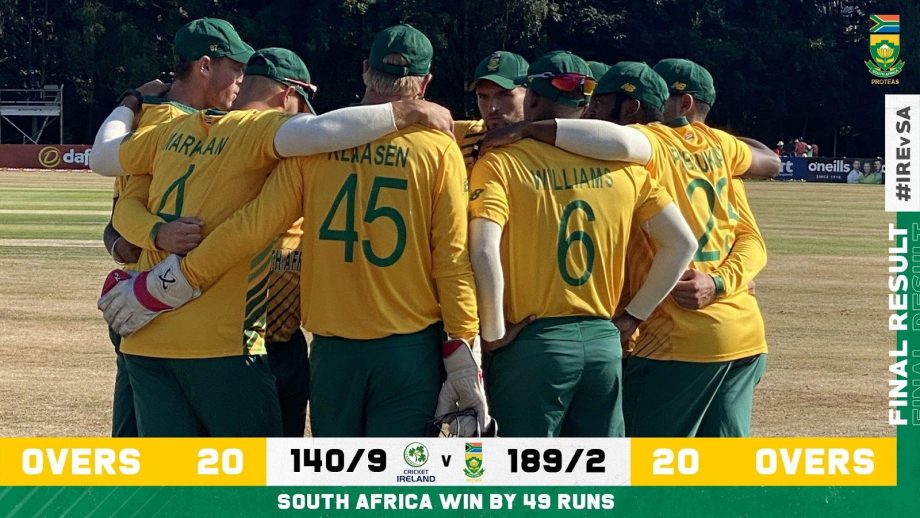 South Africa outclassed Ireland in the third T20I by 49 runs at the Civil Service Cricket Club in Belfest, on Saturday to clean sweep the series.

The pair started things in an old fashion after scoring only 35 runs in the powerplay with an average of run-a-ball. The duo picked up the acceleration in the eight over when Benjamin White came to bowl and got 10 runs.

After that, they started to increase the run rate with almost one or two boundaries every over and also reduced the dot balls with quick singles.

The skipper was dropped in the 11th over when White dropped a catch at the deep position for a six.

Bavuma completed his maiden half-century and after building a strong foundation, both the batsmen departed with a space of 15 balls.

David Miller continued his last match form after scoring an unbeaten 36 off 17 balls. He smashed Craig Young for a boundary and six in the penultimate over to increase the total.

Mark Adair, however, bowled an excellent last over but he ended up conceding 13 runs in the last over and South Africa reached a total of 189/2.

Chasing the huge target of 190, Ireland never gets going as they lost the power-hitter, Kevin O’Brien in the second over. Andy Balbirnie hit four boundaries in the first eight over and he was the only batsman who looked serious in chasing the target.

Meanwhile, SA bowlers kept chipping with wickets one after the other. And Balbirnie also got dismissed in the ninth over after George Linde trapped him in an lbw, Ireland hopes diminished.

All the African bowlers played their part in the win. George Linde took two most crucial wickets while defending – Kevin O’Brien and Andy Balbirnie.

Lizaad Williams and Wiaan Mulder also got themselves two wickets each. Andile Phehlukwayo returned with a scalp and poor choice of running cost Ireland much in the form of Simi Singh and Mark Adair wickets.

In the end, Ireland was only restricted to 140/9 in the allotted overs.

“We haven’t batted well enough in all three games. We were rusty. We’ve got eight or nine games leading up to the T20 World Cup. Our batting has been the strong point in the T20s over the years. [On Ben White’s debut] He’s worked really hard to get where he is now. [15 points for the Super League from the ODIs] We played really well during that week, and it’s a shame we couldn’t bring that to the T20s,”

“It was nice to hit the ball in the middle and contribute to the team. Reeza and I play for the Lions. We know each other’s strengths, I am sure he would have enjoyed it as well. We tried to take our time, and lay that foundation,”

“It was obviously nice to contribute. [I was] struggling in the West Indies, and a series win as well, so a bonus there. The guys make it easy off the field. [T20 World Cup plans?] Going into it to win it. [We’ll take it] one game at a time, it’s a pretty long competition. It’s been a good time in the bubble [here], and we can now go out and see the country! ”