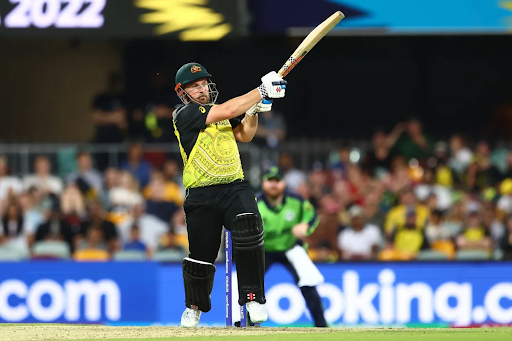 Australia moved to the second spot in the points table for Group 1 in the ICC T20 World Cup 2022 but their Net Run Rate (NRR) still remained in negative after a commanding 42-run victory against Ireland at the Gabba in Brisbane on Monday night.

For the home team, their captain Aaron Finch roared back into form scoring 63 from 44 balls to power them to a strong total of 179/5, against which the Irish team was bowled out for 137 in 18.1 overs with most of their batsmen cutting a sorry figure.

Australia are locked in in an intense battle with their arch-rivals England to remain in the top two of the points table, with New Zealand comfortably placed at the top spot in Group 1 with 5 points in their kitty after 3 matches and a superb net run rate of 3.850.

Australia’s current net run rate is of -0.304 while England, who are placed third after 3 points in 3 matches, have a net run rate of 0.239. For that matter, Australia have 5 points from 4 matches with one washed out game against England last week, and a huge defeat that they suffered at the hands of New Zealand by 89 runs in their first game of the tournament.

Australia’s dashing opener David Warner continued to have a poor time in the middle as he was dismissed for 3 but Aaron Finch roared back into form with a superb 63 from 44 balls in which he hit 3 sixes and 5 boundaries.

The Australian captain was well supported by the likes of Mitchell Marsh (28), Glenn Maxwell (13), Marcus Stoinis (35) and even Tim David (15 not out), as the home team finished at a strong total of 179/5, seeking a big victory against the Irish team.

Australia were well on their way for a huge victory as they had reduced Ireland to a paltry 25/5 after 4 overs with Mitchell Starc and Glenn Maxwell two wickets in his first overs respectively and Pat Cummins chipping in with one wicket.

However, despite their top order blown away, Ireland found a hero in Lorcan Tucker, who produced a stunning counter-attacking knock that frustrated the Australian bowlers. The right-handed Ireland batsmen turned up the heat on the Australian bowlers, stroking his way to a superb 71 not out from 48 balls with 9 boundaries and a six to his credit.

While no other Irish batsmen could really pose any form of threat to the Australian bowlers, it was Lorcan Tucker who was simply brilliant on Monday night at one of the most revered venues in cricket also named Gabbatoir, producing a quality knock that will be remembered for a long time.

Ireland were bowled out for 137 in 18.1 overs with Pat Cummins, Glenn Maxwell, Mitchell Starc and Adam Zampa taking two wickets each while Marcus Stoinis claimed one. Josh Hazlewood remained wicketless in his three overs in which he ended up giving away 24 runs.

The home team will once again hope to record a big victory in their final group match to be played on Friday against Afghanistan at the Adelaide oval, on November 4 in a bid to keep improving their net run rate. And on the same day, Ireland will face nothing less than a test of character then they take on New Zealand, who have been on a roll and have proven unstoppable on most counts.